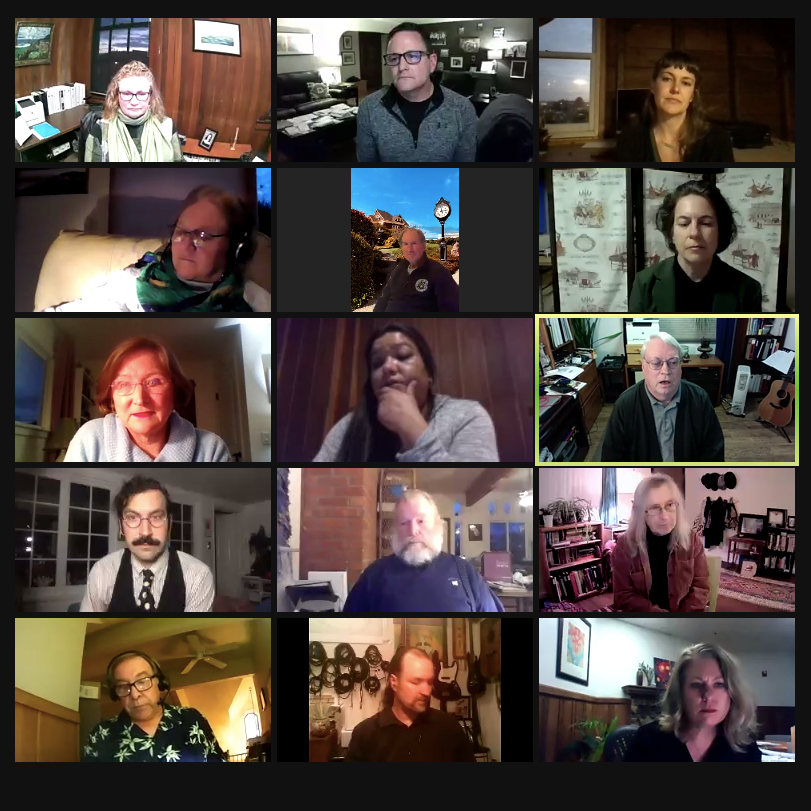 She beat out eight other candidates who were interviewed by the council for more than three hours via Zoom. Meadlin is a member of the Sherwood Valley Band of Pomo Indians, and though it’s difficult to say if she will be the first Indigenous person to serve on the Ft. Bragg Council (given the age of the city), she is definitely the first in recent memory. She will be sworn in at the next regular meeting on Feb. 22 to fulfill the remainder of Will Lee’s council term, which ends after the November 2022 election. Lee resigned at the end of December to take a job in the Bay Area.

“My family has lived here in our small coastal town, long before it became known as the City of Fort Bragg. I am a mother of two school-aged children and I manage a small up and coming restaurant,” Meadlin told the council in a letter of application.

“I volunteer at our local schools, work with our elderly, assist with the needs of our homeless as well as prior working with the developmentally disabled. I am a shoulder to lean on, an ear to listen and a voice if needed. There is no other place I would call home or would want to raise my children.”

At the meeting she said she would be a voice for people who traditionally have not been involved in local politics. She worked for two decades at Fort Bragg’s now closed but long-beloved Cap’n. Flint’s restaurant. She said she started out cleaning the bathrooms and worked her way up to manager.

“I have had to be the voice of the unseen and the unheard in our community,” said Meadlin during the meeting. I think people see me as a voice for our struggling workforce, for parents, businesses, Hispanics and indigenous people,” she told the council.

“I can see each of you doing a great job on this council,” Vice Mayor Jessica Morsell-Haye told the nine applicants. Morsell Haye said she had heard from more people supporting Meadlin than any other candidate. “It is an incredible opportunity to have your voice on the council and provide that bridge to the tribe,” Morsell Haye said.

(See our previous reporting here, with a complete list of candidates)

The only councilmember to raise any objection was Tess Albin-Smith, who mentioned Meadlin’s lack of experience in leadership positions.

“I have a problem with the amount of experience she has and whether she is prepared for this kind of role,” Albin Smith said.

Morsell-Haye said more credit should be given to Meadlin for succeeding in the difficult job of restaurant management. Albin-Smith ended up voting with the other three councilmembers for Meadlin.

Meadlin was also supported by a wide range of prominent business people and community leaders, from community activist Judy Valadao to former Mayor Lee, who vacated the seat Meadlin will be filling. Insurance broker Carol Millsap and Los Gallitos restaurant owner Margarita Valenzuela were among the business people who vouched for her.

“I am the owner of Noyo Fish Company Seafood restaurant in Noyo Harbor,” wrote Scott Hockett.
“Marcia Rafanan has been my manager for almost a year now. I needed someone to run my restaurant as I am preoccupied with other projects. Knowing Marcia has decades of experience managing and working with the public, I knew she was the perfect fit to take over the restaurant for me. Marcia has proven to be a self starter, team player, great with the public and a go getter. She has exceeded what I expected out of her these past months. I fully support Marcia to be appointed to the vacant City Council seat,” Hockett wrote. She was also supported by people who commented only in Spanish.

On the question of changing Fort Bragg’s name, she said the process would be long and expensive. She said the city is not known for a fort but for the city’s people. As well as having by far the most support of any of the candidates in letters to the council, she also was stridently criticized in one anonymous letter, which is included in the city’s council packet.

Mayor Bernie Norvell was impressed with Meadlin’s compassion and helping others. He said he had learned from other councilmembers when he had joined and Meadlin should be allowed the opportunity to also learn on the job with the help of her colleagues.

“If an election was held today, if these names were all on a ballot, Marcia would probably win in the City of Fort Bragg. I think the community is behind her,” said Councilmember Lindy Peters, who seconded the motion to pick Meadlin.

“I’m proud to second that, because the Native Americans in this area of Mendocino county were mistreated…I support getting a Native American person on the city council,” Peters said.

Peters and Norvell both singled out Mikail Blaisdell for having provided strong answers to questions. Norvell also mentioned Scott Taubold while Peters was also particularly impressed by Eva von Bahr, who, along with Mary Rose Kaczorowski, also got numerous letters of support from the public.

In random order, the council asked each candidate five questions they had received beforehand, followed by three “wild card” questions.

Progressive activist Scott Menzies, who finished third to Lee and now Mayor Bernie Norvell in the 2016 City Council election was second in letters of support [to Meadlin]. None of the council supported him at the meeting, despite answers to questions that showed he was among the most informed on council business.