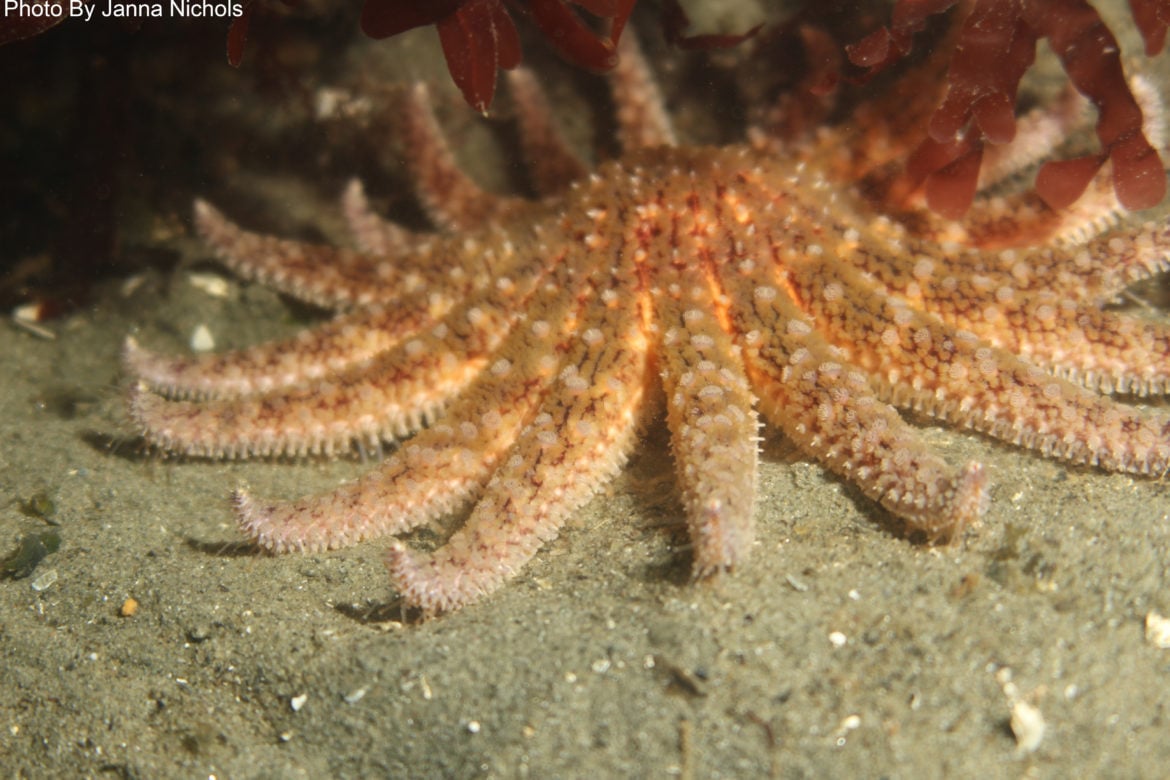 LITTLE RIVER, 2/25/2021 — If you’re like me, when you picture a sea star, you envision either Patrick from SpongeBob or a brightly colored, maybe pink or orange five-armed creature with thick, bumpy skin that’s about the size of a human hand.

But a less typical sea star, the sunflower sea star, which plays an important role in the Mendocino coast’s marine environment, is in trouble. The environmental organization, the International Union for Conservation of Nature (IUCN), added the sunflower sea star to their Red List of threatened species, an international list of species threatened with extinction, in December — listing the species as critically endangered. The IUCN listing doesn’t give the species or their habitat any legal protections, the way that federal or state listing would, but a scientist involved in the study said he’s hopeful the listing will bring attention to the species’ plight and support for research and conservation through public interest and funding.

Since 2013, 90% of the sunflower sea star population has perished — largely of sea star wasting syndrome. Almost six billion sunflower stars have disappeared from their habitat, which stretches from Baja, California up to Alaska’s Salish Sea. The sunflower star’s disappearance may seem like a distant problem, unimportant to us land mammals, but the species’ demise has triggered a series of events that has led to the collapse of many of the North Coast’s once thriving fisheries.

“The loss of sunflower stars in Mendocino and the North Coast has been very impactful on the balance of the kelp forest ecosystem and ultimately to our community,” said Tristin McHugh, a local biologist who works for the Nature Conservancy.

The Nature Conservancy, an international nonprofit, Oregon State University and other partners outlined the demise of the sunflower star population in a study published last year. The study’s findings landed the species a spot on the Red List.

“There’s a number of different rankings on the IUCN Red List site and critically endangered is one step away from extinct,” said Walter Heady, author of the study and coastal marine ecologist for the California chapter of the Nature Conservancy. “So it’s dire, [that’s] what it means. It means that we’re really at risk for extinction of the species without concerted action.”

Sea star wasting syndrome is a quite gory disease. It seems more like something that might happen in a sci-fi movie or on an alien planet rather than here on planet earth.

“The first time I saw a wasting sea star was in 2013 in Monterey, and it looked wrecked,” said Tristin McHugh, a local biologist who also works for the Nature Conservancy. “This was before we knew exactly what was going on and I remember seeing a sea star with a physical lesion, like a cut on its arm, but the more absurd and strange visual was seeing the outline and shape of the sea star melted into the sand, as if someone had made a sea star out of sand. It had physically melted into the bottom of the reef.”

The mysterious disease is called sea star wasting syndrome because the stars literally go from being a solid creature with a calcified, bone-like exterior and waste away, melt away, into nothing. Some people describe the transition as the sea stars turning into goop.

“There are many different forms that you can see a sea star wasting,” continued McHugh, who did not contribute to the study. “There’s the cut, the loss of an arm, it detaching and then it physically melting. You can see them twisting their arms, physically rejecting their body, contorting their arms and pulling them off.”

McHugh said that the first time she saw a wasting sea star, even without knowing anything about the disease, she could tell it was unwell. “Even early on you could tell it was sick, it wasn’t healthy looking, it wasn’t just sitting there doing it’s thing, it was physically stressed. You could really tell that it was undergoing something.”

Sunflower sea stars are not the only type of star that has been struggling since the early 2010s. Sea star wasting has caused a massive die off of many types of stars along North America’s Pacific Coast.

Although many types of stars have perished from the wasting syndrome, sunflower stars have taken a particularly hard hit, and are struggling to recover their population on their own. That’s why scientists from the Nature Conservancy and Oregon State decided to give special attention to these stars, which are one of the largest sea sea stars on the planet.

“They can grow over three feet in diameter and have about 20 arms with thousands of little tube feet under them which help them to sense the world as well as to move along the seafloor as one of the fastest sea stars in the world,” said Heady in a phone call, after he enthusiastically requested a minute to talk about how cool the species is. “They can move about six feet a minute. Which is not terribly fast compared to a cheetah, but it’s actually a very fast moving sea star to the point where you can see them move across the floor.”

The loss of this gigantic sea star, as well as the other types of stars, has decimated near shore ocean ecosystems and the economies that rely on them in many places. McHugh said that holds true here in Mendocino.

“You know everyone in the community is keenly aware of what’s going on with kelp forests and everything we’ve been talking about when it comes to kelp loss, the boom in purple urchin, the loss of the abalone fishery, the federal disaster to the red urchin fishery and the cultural and aesthetic loss of these forests, but it’s all tied to the disappearance of the star.”

The disappearance of sea stars, sunflower and otherwise, in tandem with warmer water caused by climate change, triggered a series of events that have almost totally destroyed multiple local fisheries — fisheries that have historically played important cultural and economic roles in Mendocino including the red urchin fishery and abalone fishery, which, before they collapsed, could bring in up to $3 million and $44 million in annual revenue to the county’s economy, respectively.

Here’s what happened: the sea star was the last remaining predator of purple urchin. Purple urchin eat kelp, which are big brown algae that grow in groups and create dense underwater forests, providing food and shelter to nearshore marine life. When the sea star numbers plummeted, the purple urchin population exploded and they ate so much kelp that the forest disappeared. All the species that relied on the forest for shelter and food, such as red urchin, abalone, fish species, and more, were left empty handed.

Noting the rapid decline of sunflower sea stars, scientists from the Nature Conservancy and Oregon State University decided to find out just how many sea stars were left. When they found that over 90% of the population, or 5.75 billion sunflower stars, were gone they came to the conclusion that the population was critically endangered. They submitted their findings to the IUCN, which agreed with their assessment and listed the species as critically endangered on their Red List.

Now that the species is listed, scientists are trying to figure out how to support and bring back the population.

“Researchers from University of Washington and the Nature Conservancy are exploring captive breeding programs,” said McHugh, who is not involved in the research but is familiar with it. They are trying to figure out if the stars can reproduce in a lab setting and if so, if they can, or should be placed back into the ocean.”