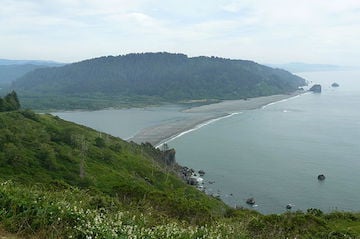 MENDOCINO Co., 1/9/20 — High surf including breakers that could reach up to 30 feet are in the forecast for the North Coast this weekend, along with an astronomical high tide occurring on Sunday morning. The National Weather Service warns these swells could be several feet higher than the recent high surf events, which have resulted in the deaths of at least five people and multiple marine rescue attempts over the past several months, in Mendocino, Sonoma, and Humboldt.

The high surf warning is currently in place for Sunday from 3 a.m. to 6 p.m but the ocean will be active today and leading up to the high tide Sunday morning. Beachgoers should keep a safe distance and mariners are encouraged to stay in port if possible. The high surf warnings are for most of the North Coast, you can see the specific regional warnings at the NWS website.

In general, but especially during high surf warnings, beachgoers should never turn their back on the ocean and remain in arm’s reach of young children during high swells, and to stay back jetties and rocks and surf zone if wave watching. If someone is swept away, call authorities immediately and note any landmarks to help identify the location.

High surf returns to the coast of California once again on Sunday, with 28 to 30 foot breakers forecast for the Del Norte, Humboldt, and Mendocino coasts. These will be at least several feet higher than the past few high surf episodes.

Breaker heights will increase very late tonight and peak on Sunday, coinciding with a high astronomical tide Sunday morning. West-facing beaches and coastline will see the largest breaking waves. Large surf is turbulent and dangerous, so beachgoers should stay farther back from the surf.

Stay off of jetties or rocks near the surf zone! If you are going wave-watching, please watch from a safe distance.