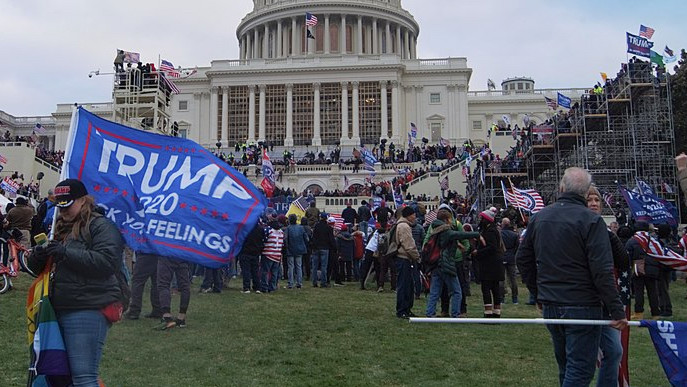 Right-wing extremists, and Trump supporters storm the U.S. Capitol during the Capitol on Jan. 6, 2021. (Tyler Merbler / via WikiCommons on a Creative Commons license, this photo has been cropped)

Editor’s note: It’s become a truism, but these are unprecedented times. Though we stress local news, we believe that reporting on our area’s U.S Representative, is important for electoral accountability. This does not mean that we are in any way endorsing the rep.; we are merely conveying his actions and stances to the voters of this district.

WILLITS, 1/11/21 — In response to the riot and storming of the Capitol last week, which Democrats are characterizing as an “insurrection,” Rep. Jared Huffman has joined many of his colleagues in calling for a slew of actions to, in his words, “defend our democracy.” Democrats in the House have already moved forward with one big step, introducing articles of impeachment against President Donald Trump for the second time. (Read our interview with Rep. Huffman)

Huffman sent a letter to constituents this morning, listing out the various actions he is joining his colleagues in pushing for. In the letter he urges the impeachment and removal of Trump, and a call for Vice-President Pence to invoke the 25th Amendment. He also asks for reviews into the failures of the Capitol Police in defending the seat of American government from rioters; and an investigation into a delayed response from the National Guard. Other measures include requests to federal law enforcement to investigate and prosecute the rioters and right-wing extremists.

Perhaps most unusual is a call for “A resolution to sanction and remove lawmakers who supported the insurrection under Section 3 of the 14th Amendment.” The 14th Amendment, one of the “Reconstruction amendments,” was passed after the Civil War and includes several provisions to protect the recently freed former slaves. However, it also includes certain provisions dealing with other hang-overs from the Civil War, including a clause in Section 3, which states, “No person shall be a Senator or Representative in Congress…who…shall have engaged in insurrection or rebellion…” This provision was intended to bar former Confederate politicians from being elected to federal office.

Prominent members of the Congress, including Huffman, are now saying that that Republican lawmakers who attempted to subvert the confirmation of the election could be removed under this section. This procedure has been used rarely since Reconstruction. One of the last times was in 1919 when Congress voted not to seat a Socialist Party elected by Wisconsin voters.

Around midday House Democrats took the unprecedented step of introducing articles of impeachments a second time against President Donald Trump. The articles are lengthy, and include boilerplate on Constitutional standards, as well as justifications, and explanations. But the meat of the articles reads:

Here is the note from Huffman:

It has been a traumatic week for America. The actions taken to incite insurrection at the Capitol last week demand accountability. Many of you have reached out asking what steps I am taking to defend our democracy and hold President Trump accountable, so I’d like to share with you this update on my recent actions.

Thank you, and stay well,