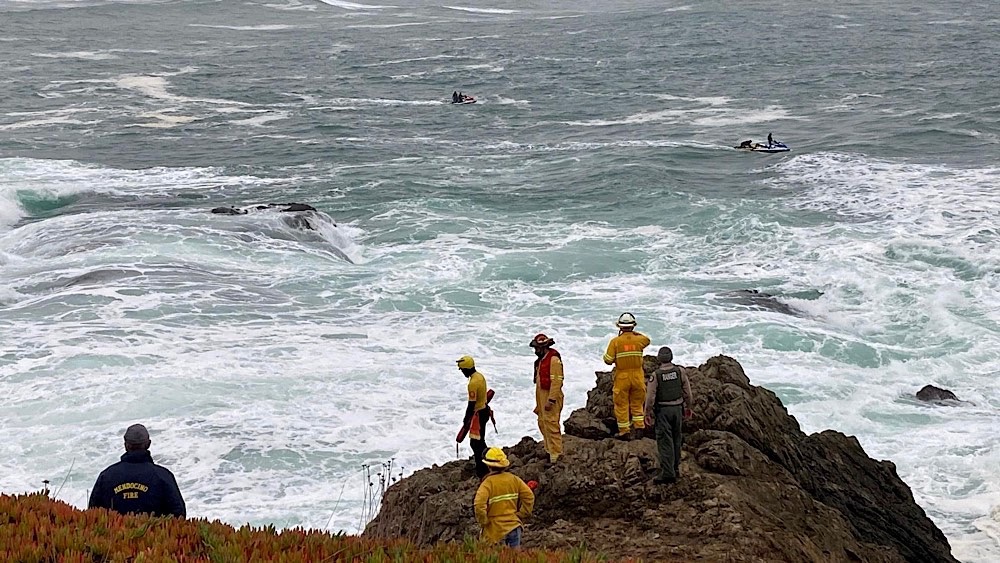 Rescuers search for David Juarez Reyes off the coast of the town of Mendocino. (Courtesy of the Mendocino Volunteer Fire Departmnet / Deirdre Lamb)

MENDOCINO Co., 1/4/20 — A 45-year-old man visiting the Mendocino Coast fell into the ocean near Portuguese Beach, in the town of Mendocino, and drowned this weekend. The body of David Juarez Reyes was recovered after an extensive water rescue operation, and emergency life-saving medical assistance given, but he could not be resuscitated, and was pronounced dead at the scene. Ocean conditions were described as “extreme,” and rescuers searched, from the land and with jet skis, for 45 minutes before recovering the man.

In Sonoma County a 40-year-old father and his two children, all Sonoma County residents, drowned off Goat Rock. The Press Democrat as an account of those drownings.

According to Captain Greg Van Patten of the Mendocino County Sheriff’s Office, which is also the county coroners’s office, Juarez Reyes was viewing the ocean with his wife, when he decided to scramble down the rocks, and fell in.

According to a press release from the Mendocino Volunteer Fire Department, this occurred near Portuguese Beach in the Mendocino Big River Headlands State Park, which depending on the spot is either right in the town of Mendocino or very near.

Despite four searchers on Jet Skis and another 20 on land, the victim was not located until after being in the water for about 45 minutes, and was ultimately pronounced dead after CPR was conducted on shore.

High surf and warnings of swells were issued by the National Weather Service for Saturday, and several other people have been swept off the northern coast during high swells in the last several months. Whether you are a local or a visitor, the press release warns beachgoers not to underestimate the power of the ocean and heed the following advice.

“If you think that someone may be in trouble, please call 911. Try to identify notable landmarks to give to the dispatcher and rescue personnel can always be canceled if the situation resolves itself,” the release states.

Here’s the press release from the Mendocino Volunteer Fire Department:

On January 2nd, 2021 Mendocino Volunteer Fire Department was dispatched to perform a water rescue for a reported person who fell in the ocean at Mendocino Big River Headlands State Park in the area of Portuguese beach. Units from Mendocino Volunteer Fire Department, working in conjunction with CA State Parks Lifeguards response, recovered a victim who unfortunately succumbed to his injuries sustained through significant down-time in the water.

The incident was first dispatched by CalFire’s Howard Forest Command Center at 1543 for a reported person in the water off of Mendocino Big River Headlands State Park. Mendocino units arrived at the scene shortly after State Parks Lifeguards and began collecting information to formulate a rescue operation. As more responders arrived at scene, a hasty search was undertaken along the coastline in an effort to spot a victim in the water.

Concurrent to the hasty coastline search, Mendocino Fire commenced response of both its Water and Cliff Rescue teams to the incident with the Water Rescue team launching from the Big River boat launch. “The ocean conditions were extreme.” stated Fire Chief David Latoof. “Our folks showed tremendous skill navigating through the surf to make it to scene in the expeditious manner that they did.”

With four rescue personnel on two jet skis, a State Parks Lifeguard in the water, and over 20 personnel on land all looking for any sign of the missing individual, a victim was spotted floating in the bay of Portuegese Beach after being down for at least 45 minutes. Soon to be sworn in Judge Patrick Pekin worked with Captain Nicholas Winegar to bring the patient ashore to the hands of responders who immediately began CPR. Resuscitation efforts continued for twenty minutes with no shockable rhythm and the victim was pronounced deceased by the responding Paramedic from Adventist Health Mendocino Coast Ambulance. The victim was then covered and carried up to the trail where Mendocino County Sheriff Department officers assumed custody.

When asked about difficulties conducting ocean rescue operations in such tumultuous conditions newly elected Assistant Chief Patrick Clark said, “It all comes back to training. We train extensively for situations just like this. When new members join the Water Rescue Team we have them build skills, practice quick maneuvering in the protected river, and then gradually move to the more dynamic conditions of the ocean.” Firefighter Paulo Felipe Andrade, who leads Water Rescue training and is also a State Parks Lifeguard added, “The whole operation is truly a collaborative effort. Obviously we would have preferred a different outcome today but we know that we gave every effort trying to rescue this victim.”

This incident once again highlighted the critical nature of rapid rescue response on the Mendocino Coast. MVFD and State Parks work extensively together for the protection of our community. Former Assistant Chief John Paul McMillian continues to express his admiration for the State Parks Lifeguard crew, “As someone who has been doing ocean rescue for close to twenty years off this coast using mostly skis and boats, I am in awe of the State Parks Lifeguard swimmers. Those guys and gals are next level.”

Although it is always important to be aware of ocean conditions, a heightened sense of awareness should be taken during these winter months. Mendocino Fire would like to remind everyone that ocean safety should not be taken lightly. Conversations among firefighters pointed out that they continue to be amazed by how powerful the ocean is. It never ceases to surprise with its tremendous force. Whether one is a local with extensive ocean experience, or a tourist here for the first time, always be aware of what the ocean is doing. Sneaker waves are real and our rocky shore can be unforgiving. It is easy to be swept off the rocks in a moment of inattention or even when exploring the tidepools and being overcome with high energy swell.

If you think that someone may be in trouble, please call 911. Try to identify notable landmarks to give to the dispatcher and rescue personnel can always be canceled if the situation resolves itself.

Mendocino Fire would like to extend our heartfelt condolences to the victim’s family. We hope that the following statement submitted by Captain Sayre Statham is a somber precaution that may serve to prevent another loss. “The real tragedy was the victim’s family watching as a loved one was lost to the ocean. We watched a horrified family get broken apart. We luckily got to go home and hug our families. I’m not sure if there are words that can give peace to the family, our local responders, or to stop this from happening again.”

If you have questions regarding this release, our information can be found at www.mendocinofire.com