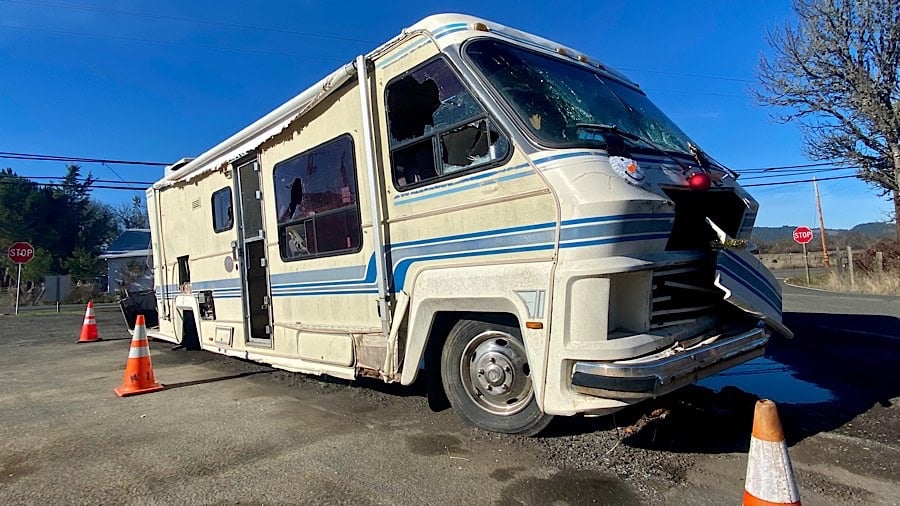 If you see an abandoned car and want to report it, you can call the county’s Vehicle Abatement Department at 707.234.6668.

WILLITS, 12/18/2020 — If you drive to the corner of Hearst-Willits Rd. and Valley Rd. near Willits you’ll see a badly broken up old RV sitting in the traffic triangle. The large Sportscoach Cross Country has its back half totally smashed, with particle board, bits of insulation, oil, plastic and wires strewn about, only a couple dozen feet from a seasonal creek.

It’s been there for weeks.

As Mendocino locals, you’re probably familiar with your own local “junk car.” In fact, an average of over 100 vehicles are left, deserted on the sides of roads, each year. They’re abandoned from the mountains to coast, in far flung areas of the county, and off major roads. So what happens to those cars? Who cleans up the mess? The Mendocino Voice called around to find out.

The county disposes of the cars that people, evidently, leave on the side of the road when they don’t want to get rid of them properly themselves. John Burkes leads the charge as head of the Vehicle Abatement program, which typically has an annual budget of $250,000 and is part of Mendocino County’s Planning and Building Department. Burkes said in a voicemail message that he deals with about 130 deserted cars a year.

If you’ve seen a sudden spike in the number of cars cluttering the roadsides, it’s likely connected to the recent  month-long pause in abandoned car removal because the contractor that the city used to work with, Ukiah Auto Dismantlers, went out of business in mid-November. But, on Tuesday, the Board of Supervisors approved a two and a half year, $625,000 contract with All In One Automotive Repair & Towing, so the county is moving forward with the task of getting junk cars off roads and public lands in Mendocino.

The cost of moving the cars can vary greatly, depending on where the car is. Sometimes the price tag is only a few hundred dollars, but other times the cost of towing and dismantling a vehicle can cost up to $3000.

So essentially, Mendocino tax payers are shelling out between $200 and $3000 every time someone leaves a car on the side of the road for the county to deal with. “The county is using the same funds that could be used to fix potholes, ensure homeless shelters or provide other services to county residents,” said Ted Williams, District 5 supervisor, during a brief phone call about the matter. Williams added that it’s important that they clean up the vehicles, which can leak harmful chemicals and are an eyesore.

It’s against the law to abandon a vehicle for more than 10 days, if it is not completely enclosed in a building in a “lawful manner” under section 15.28.010 of Mendocino’s municipal code. However, the law is difficult to enforce. Likely because people drop their vehicles in places or at times where they don’t think they’ll get caught.

The county does try to find the owners by using the DMV database so they can send them an invoice for the amount spent cleaning up the car, but Williams said it’s difficult to find the correct owner. He explained that sometimes vehicles have changed hands many times, and that often, when the county reaches someone, they claim they weren’t the last owner.

Note: Lana Cohen is a Report For America fellow covering the environment & natural resources for TMV & KZYX. Her position is funded by the Community Foundation of Mendocino, Report for America, & our readers. You can support Lana’s work here or email publi[email protected]. Contact Cohen at LCohen@mendovoice.com. TMV maintains editorial control.