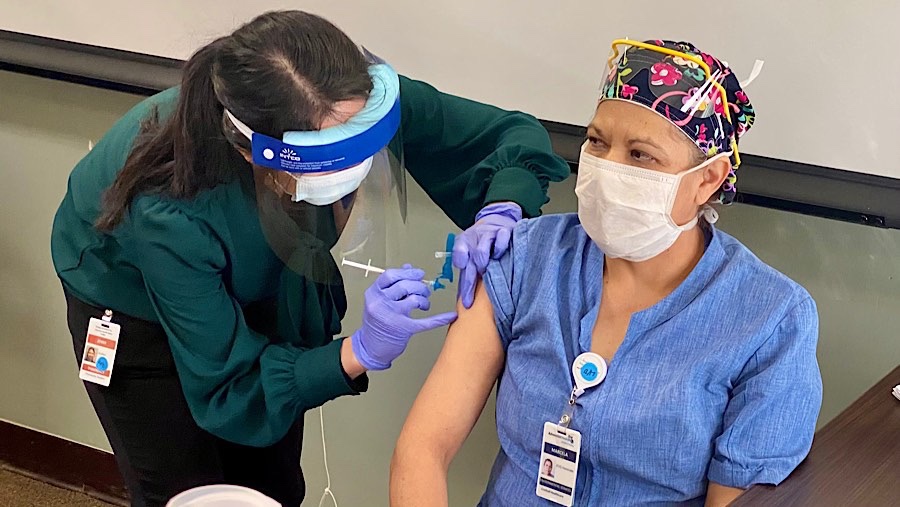 There was much joking and cheers, as these workers recieved their first shot on the road to immunity from the pernicious disease. First up was Dr. Mark Luoto and ER doctor, followed by Nurse Holly Bennett, RN, and Marcela Gamez a housekeeper.

ORIGINAL
WILLITS, 12/17/20 — Local officials expect Mendocino County’s allotment of the Pfizer COVID-19 vaccine, 975 initial doses, to arrive sometime this week, perhaps as soon as today. Other counties in the region, including Humboldt which also recieved 975 doses, have already gotten their batch, and officials have no said why Mendocino’s is delayed.

The vaccine itself is comprised of microscopic segments of messenger RNA, the molecule used by all life to translate DNA blueprints into instructions for protein construction. In the case of this new technology of mRNA vaccines, these short snips of RNA code for a protein present on the COVID-19 virus. These snips are in turn wrapped in small globs of lipids (fats) which allow the mRNA to pass into immune cells, where the RNA will be used by our own immune cells to produce proteins which will allow our immune system to recognize the virus, and fight it off before it can do substantial harm.

However, these mRNA fragments are extremely fragile, and for long term storage must be kept at extremely low temperatures, far beyond the capacity of an ordinary fridge. And while the Mendocino County Public Health Office has ordered just such a freezer, it has been delayed, meaning that the only such freezer in the county is at one of the local hospitals. It is possible that this deficit in infrastructure has been the cause delays, but in this rapidly evolving and unprecedented many functions of government remain opaque, if only from speed. The county is also expected to receive at least one of these high-tech freezers this week, perhaps as early as today.

Still, the vaccine has been distributed form Pfizer to the State of California and the state in turn is delivering dozes to each county for distribution — and Mendocino is expected to begin that distribution in the next couple days. The order in which people get vaccinated is being determined by the federal CDC and state government, according to what are being called ethical and equitable principles. In the earliest stage, referred to as “tier 1” frontline medical workers, meaning:

The 975 doses arriving this week are only a first dose, a second booster will have to be administered in about a month. According to Ignacio “Nash” Gonzalez, a County of Mendocino veteran who has been instrumental in coordinating disaster response and is organizing the vaccination effort, each county in California has been required to submit a vaccination plan conforming to the state and federal guidelines, to qualify to receive the vaccines.

This means that while the counties are responsible for devising a plan for how to distribute the vaccines, they do not have latitude in determining what kinds of people or professions will get the vaccine — they will merely determine who fits state and federal criteria.

Said Gonzalez, “We’re in communication with the State of California everyday. We anticipate on receiving the vaccine and freezer by the end of week.” Gonzalez added that he could not discloses exactly where the vaccines would be stored, only that the county would be working with Adventist Health which runs the three local hospitals.

The vaccines represent to many a light at the end of the tunnel to this ordeal of pandemic and lockdown, but over-enthusiasm may be inadvisable. Public Health Officer Dr. Andy Coren said at the Board of Supervisors meeting on Tuesday that it will likely not be until summer that a sufficient number of people will have been vaccinated to confer herd immunity.

In the meantime we are in the midst of a surge in infections disease unlike any other seen in the United States since the Spanish Flu pandemic more than 100 years ago — and the current surge shows no sign of abating. Yesterday, Wednesday, another 57 cases of the disease were confirmed, and he rate of new cases appears to still be growing.

Public health officials across the nation have urged people not to visit family for Christmas, nor to hold New Year’s parties, but are also voicing concern that given the level of “COVID fatigue” suffusing society, worsening surges and spread are likely.

Hospitals across the state are already overwhelmed, and struggling to attend to patients, while governments are beginning to prepare measures to cope with an overflow of corpses, beyond what our mortuary and burial infrastructure can normally handle.

Here are some graphs for Wednesday, December 16, 2020, showing the status of the pandemic in Mendocino County: