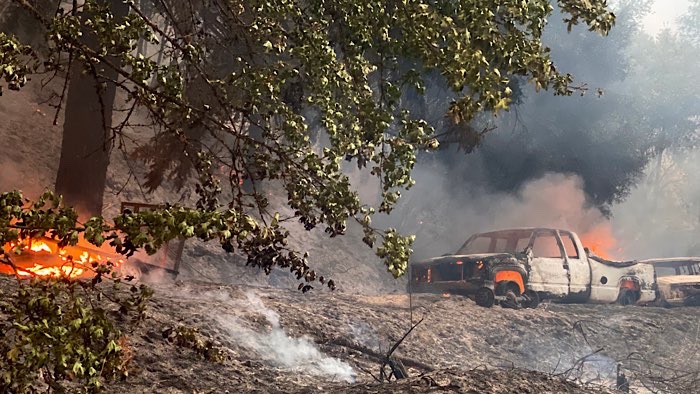 LITTLE RIVER, 12/10/2020 — Hazard mitigation plans, disaster recovery, and electric vehicle charging stations — those are some highlights of environmental topics discussed at this week’s Board of Supervisors meeting.

During the 10 hour meeting that took place on Tuesday, the board approved an updated hazard mitigation plan, which unlocks access to Federal Emergency Management Agency (FEMA) funding. They also said yes to an ordinance to expedite the application process for electric vehicle charging stations, which may push forward green, sustainable transportation in Mendocino County. On the matter of post August Complex and Oak Fire cleanup, the board passed an ordinance that would ensure that Mendocino County doesn’t end up footing the bill for private property cleanup. That ordinance will be revisited again on the consent calendar next week.

Mendocino County’s disaster recovery and code enforcement divisions, along with Mendocino County council introduced the fire debris removal ordinance, which would ensure that the cost of private property cleanup from the Oak and August Fire does not fall to the county. The Board passed the motion unanimously, and it will be ratified at the next meeting in the consent calendar.

Together, the Oak and August Complex fires burned 75 structures in Mendocino County. When homes burn down from wildfire in California, the state Office of Emergency Services, the Environmental Protection Agency (EPA), and the Department of Toxic Substances Control, may all come in at different stages to clean up — to dispose of toxic and hazardous materials, remove destroyed cars, and get rid of ash and hazardous trees.

There are two steps to this process. The first is the removal of hazardous materials. CalRecycle, which is part of Cal OES, and the Department of Toxic Substances Control (DTSC) completed phase one in mid-November, removing toxins from vehicles and solar batteries, and testing the homes in the burn area for asbestos. The homes where they found asbestos are marked with a pink ‘X.’ Metal containers that Cal OES and DTSC removed toxic substances from are marked with a white X, and are now just considered scrap metal.

The next step is to remove building ash, hazardous trees, and cars. For this phase, homeowners can choose to let CalRecycle, who uses outside contractors, do the on the ground work or they can do it themselves at their own cost.

As of Tuesday, 14 homeowners hadn’t let Cal OES know what they wanted to do either way. That’s where the fire debris removal emergency ordinance comes into play. The ordinance would allow the county to go onto those properties without official permission from the homeowners and check out the scene.

Deputy Chief Executive Officer of the Disaster Recovery Division, Darcie Antle, said she doesn’t expect that they will have to use the ordinance, but they are asking for it because Cal OES requested they do so. Antle, who helped present the ordinance at Tuesday’s meeting, said over the phone that homeowners have till January 15 to let the Office of Emergency Services know how they would like to handle clean up.

Without the ordinance allowing the county to assess what needs to be done and if homeowners don’t respond by January 15, then Mendocino County would be responsible for cleaning up. So the ordinance is kind of like a safety net.

If the homeowners don’t get back to the state, the county can go check out the situation and see if abatement needs to be done. Then, if needed, they can have the state do cleanup even without homeowner permission.

If the county does not give the state a path to clearing the debris, that burden will fall on the shoulders of the county.

“What we don’t want is for the county to be on the hook for hundreds of thousands of dollars per each property to have to clean up,” said Ignacio Gonzalez, “Because once the state leaves, we’re on our own.”

The motion for the ordinance passed unanimously. Typically ordinances have to be read at a second meeting before being ratified, however, because this is an “urgency ordinance,” meaning it pertains to something very pressing, a second reading will not be required. Instead, the Board will pass the law in the consent calendar next week. The delay results from clarity issues raised by Devon Jones, executive director of the Farm Bureau. Jones voiced concerns about hazard tree removal interfering with Cal Fire’s forest management practices and asked that it be clearly stated in the ordinance that only trees that pose a risk to public right of ways be removed.

The transportation sector is the largest contributor to greenhouse gas emissions in the United States. In 2018, it accounted for 28% of all human caused emissions, according to the EPA.

But this may change in the near future. Around the country the sale of electric vehicles is growing rapidly In 2019, 326,664 electric vehicles were sold in the United States; that’s more than a 200% increase from 2015, when 159,616 sold. That’s according to data from USAFacts, a nonprofit organization dedicated to providing a data driven picture of America.

This September, Governor Gavin Newsom committed to banning all sales of new gasoline powered vehicles by the year 2035.

Mendocino County already has dozens of electric chargers, which you can see a map of on the county’s website. The ordinance was drafted to make it easier for businesses and homes to install electric vehicle chargers, therefore making electric vehicles more convenient and incentivizing residents to buy electric rather than gas.

It will expedite the process by digitizing it and following a uniform checklist and application.

Other issues discussed at Tuesday’s meeting included issues related to COVID-19, a tax refund for the Little River Fire-Protection District, and topics related to cannabis, stormwater, and building violations. You can find the full agenda on the Mendocino County Website.

During the first half of the meeting, the board voted unanimously to adopt an updated hazard mitigation plan for the county. The previous plan was written in 2014 and without a new plan, the county can’t tap into FEMA funding to support disaster recovery.

Ignacio (Nash) Gonzalez, disaster recovery director for Mendocino County, presented the new plan to the Board along with a representative from Atlas Planning Solutions the disaster recovery response consultancy working with the county to write the new document. The plan was written and developed along with five participating entities — Fort Bragg, Willits, Point Arena, Ukiah, and the Mendocino County Office of Education.

Every state, local, and tribal government is required by the Federal Government to create a hazard mitigation plan. The plan is supposed to lay out how the county will prepare for and respond to natural disasters. The plans must be updated every five years in order to unlock access to federal grant funding. Basically, if the county does not update their plan every five years, they’re not eligible for funding from the Federal Emergency Management Agency (FEMA) when disaster strikes.

The plan was supposed to be updated last year, but due to extenuating circumstances, the county asked for and received a one year extension without penalty.

The plan outlines the county’s strategy for disaster alleviation. It lays out what projects they want to complete to increase the communities resilience to disaster, what types of natural disasters pose the biggest threat to the county, how to engage community members in hardening their neighborhoods, and through all of that, how to be prepared for the impacts of climate change.

Now that the board has approved the plan, the plan will go back to FEMA for final approval.