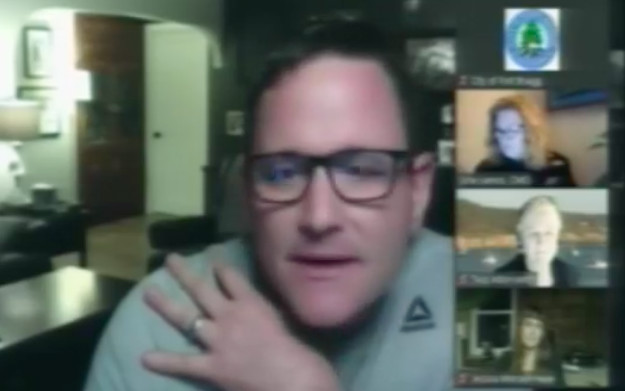 A screenshot of the Fort Bragg City Council meeting.

The protocols that come with the occasion were a little bizarre in a meeting held by Zoom, although outgoing Mayor William Lee and City Clerk June Lemos provided laughs and smiles that kept the virtual signings and swearings-in moving along.

Norvell is an owner of his family’s local paint store, has been a local coach and just completed four years on the council, including the last two as the city’s vice mayor, according to his online biography. Morsell-Haye was raised on the coast and returned in 2015 with her husband Mikael, who was born in Fort Bragg, to raise their children. They purchased the 130-year-old downtown Golden West Saloon with partners and have restored and revitalized the historic building and business. She has been on the council for two years. She is an artist and textile designer by trade.

The meeting started with the official swearing in of Lee to a new four-year-term on the city council, despite the fact this would be Lee’s last regular meeting. Lee was reappointed to the council along with then-Vice Mayor Norvell when nobody else ran in the November election for the two seats. Before he could be sworn in, Lee took a new job and relocated to the Bay Area, which was where he was during Monday’s meeting. He resigned effective Dec. 31. This gave him a role in choosing both the new mayor and vice mayor. He also participated right to the end of the two and a half hour meeting. In the council-manager form of government the city operates by, the mayor and vice mayor are chosen by fellow councilmembers and do not require a separate swearing in to their new positions on the council.

“This is going to be somewhat different than our usual procedure because we are not face-to-face with our hands raised in town hall,” said Lemos. After the swearing in to the council with hands raised, Lee and Norvell each took a swearing in document they had printed out and signed it. Lemos told them they must show the official document. Lee signed his with a flourish, saying he needed a different pen for each letter, like the president. Then he twirled the signed document and held it over his head for the Zoom audience of fellow city Solons and 10 people in the Zoom audience, with full “current president” flourish. “Look everybody!” then adding, “There is nobody in here.”

Typically, the next step in the ceremony would be to turn the signed document over to the city clerk. However, the distant Lee said he would deliver it the next time he was back in Fort Bragg. She said she could then stamp it and everything would become official. The next step in the prescribed ceremonies was for Lee to turn the meeting over to City-clerk Lemos, so that a new mayor could be nominated. Lemos took the invisible gavel across Zoom from Lee, who promptly nominated Norvell to be his replacement, seconded by Morsell-Haye, with a unanimous vote following. The symbolic gavel then went to new Mayor Norvell.

“Thank you all very much. It’s both an honor and a privilege to have your vote of confidence. I promise to do my due diligence to fulfill all the duties of mayor to the best of my ability. I’m sure I will be leaning on all of you,” Norvell said.

Lee also was awarded a plaque virtually for his four years of service by City Manager Tabatha Miller, who waved the award in Zoom with the flourish and smiles of the evening, asking Lee to pick it up and perhaps pose for a photo on the steps of city hall, with masked fellow councilmembers.

Staff and fellow councilmembers all gave parting salutes to Lee.

“I never would have done this if it weren’t for you,” said Morsell-Haye. “You can make anything look fun. I’m so grateful to be here. You have been an incredible leader. I’m impressed with how you have stood up and weathered this incredible time. I’m impressed with the culture you set up on this council, how you made it okay to disagree and important to disagree. How you have made space for everybody’s voices and for your incredible leadership,” Morsell-Haye said.

Peters’ praise for Lee included for being the best dressed mayor.

“There is a certain sartorial sense you bring to the council that is classy,” Peters said.

Norvell and Morsell-Haye have worked together on the council on a regular basis to get things done, such as on the issue of changing Fort Bragg’s name, despite clear disagreements and obviously different political perspectives. The council is officially non-partisan and its members don’t express party affiliations or party politics at the meetings, at least in the last six months while this reporter has been attending by Zoom.

The council also discussed the process of appointing someone for the seat being vacated by Lee. Current plans are for a special meeting on Jan. 19 to interview candidates.

“This gives us a great opportunity to appoint someone for my seat. I would encourage people to apply and to serve on the city council. It would be great to have another female serving. It would be amazing to have someone from the (Latino) community to serve,” said Lee

The council’s ad-hoc appointment committee, composed of Peters and Albin-Smith, has developed a one-page application that will be reviewed by city staff. With nobody applying to run for the seat the last time, the council is looking for ways to show the fun serving on the council can be. There will be advertisements on Facebook and likely in the Fort Bragg Advocate-News.

Lee might not get away so fast.  A special closed session only meeting was announced Tuesday afternoon for Wednesday, Dec 16 to consult with legal counsel and deal with anticipated litigation.

Council members are paid a stipend of $3600 per year.