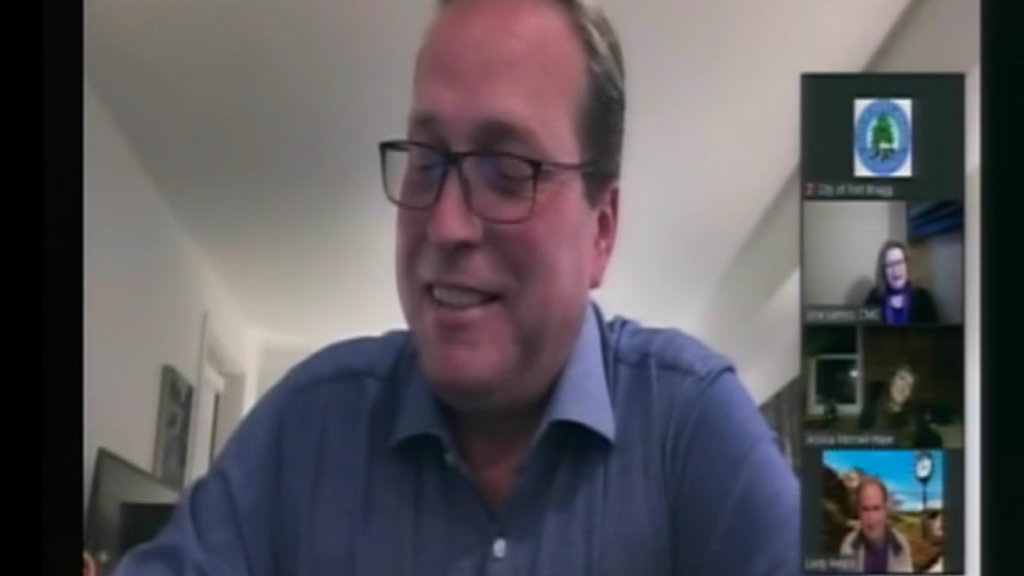 FORT BRAGG, 11/24/20 — Fort Bragg city councilmembers decided to appoint, not elect, a replacement councilmember, a move which would save the city the $15,000 cost of a special election. The decision also comes in light of a dismal 2020 election, in which no Fort Bragg citizen decided to challenge either incumbent in the city council elections, resulting in the election just being cancelled.

The council formed a two-person ad hoc committee to lead the appointment process and find ways to broaden the appeal of city service to those who have traditionally not been involved, such as Latino people and families. Lindy Peters and Tess Albin-Smith will serve on the ad hoc.

The Nov. 23 council meeting was held via Zoom, visible on the city website, Facebook and public access television Channel 3. Mayor William Lee, who has resigned effective Dec. 31 to take a new job in the Bay Area, presided over most of Monday’s meeting, taking perhaps his last opportunity as mayor to express gratitude to city residents, city staff and fellow councilmembers. A mayor and vice mayor to serve for the next two years are set to be selected at the council meeting, on Dec. 14.

No formal vote was held, with Monday’s meeting serving to chart a plan of action for appointment of a new member. Lee did not participate in the discussion about his replacement. The other four councilmembers favored appointment and creating the ad hoc committee to lead the appointment process so that it brings forth a broader cross section of the Fort Bragg population. The council technically could still change its mind but all indications were that everybody favored appointment, with nobody supporting calling a special election.

Although the council liked the $15,000 cost savings, they seemed more concerned about going until Nov. 2, 2021 with only four members, while waiting for that first possible date for a special election. “Last time when we actually had open elections, nobody stepped forward other than the two incumbents,” Councilmember Lindy Peters said. “Process-wise an election would be the proper way to go. But with only four people on the council and some important decisions coming up, I don’t think it would be a wise decision to put off for that long when nobody ran the last time.”

Lee and Vice Mayor Bernie Norvell were appointed to retain their council seats back in August, when nobody else filed papers to run for council. Two months later, Lee announced his resignation.

An election is generally considered the better choice in a democratic system, to avoid any appearance of an insider choice and to have voters pick their own representatives. In the past, some members of the Fort Bragg public have insisted council choices should always be left up to the voters, but not at Monday’s meeting. Indeed, though turn out was high this year, likely due to increased ease of voting with all voter receiving a mail-in ballot, enthusiasm was low and no citizen stepped up the challenge incumbent councilmembers in Fort Bragg, Willits, or Point Arena.

Only two members of the public commented at the meeting, through email, neither pressing for a special election. Judith Valadao encouraged the council to appoint, “With the pandemic getting worse and positive numbers going up daily, the highest priority should be given to the health and safety of our community. While the cost of an election might seem small, it could very easily be that these funds may be needed as things continue to get worse,” Valadao said. “You aren’t going to make everybody happy. So you might as well save some money and not have campaigns going on during this time,” she said.

Attorney Jacob Patterson said if appointment is chosen it could be a way to increase diversity.

“It could prove beneficial to take this opportunity to increase the diversity of the city council by recruiting and appointing a Fort Bragg resident with indigenous heritage or a Latino/Latina member of the community who could provide additional perspective, viewpoints and life experience,” Patterson commented.

Most important to the council was to broaden interest in city service and to appeal to a more diverse population. Hopes were expressed that an appointed person might be someone who wouldn’t normally run for office because of the hassles involved in electioneering. Ideas for what the committee could explore included advertisements in two languages, finding a way to provide child care services to the council and audience and even changing meeting times or holding day meetings if that would broaden the appeal of city service.

“I like the idea of an ad hoc committee, particularly tasking them with looking at ways to increase getting the word out to a more diverse section of our population,” said Councilmember Jessica Morsell-Haye. She favored Albin-Smith’s idea of providing childcare, once the council returns to live meetings, as a way to increase participation.

When it came time to create the ad-hoc committee, Mayor Lee turned the meeting over to Vice Mayor Norvell, who then appointed Peters and Councilmember Tess Albin-Smith to comprise the committee. Action on the seat is required by March 1, if Lee does indeed serve until Dec. 31 as planned. The appointed person would serve only until November of 2022. If a special election was called for, the winner would serve until the end of Lee’s new term in November of 2024.

The idea is for applicants to be formally interviewed for the job only by the full council in open session, not the ad-hoc subcommittee. No names have yet been put forward publicly for the seat but there was some discussion that indicated some names have come up.

Peters pointed out that if a woman was chosen for the open seat, it would be the first time in the history of Fort Bragg that the council would have a female majority.

In other business, City Manager Tabatha Miller gave an update on two disaster planning efforts now underway, one county-wide, and one in the city. She said the new Mendocino County Multi Jurisdictional Hazard Mitigation Plan is up for a vote at the Dec. 14 City Council meeting

“This is an update of the 2014 plan, It’s been 10 months in the works. They will be asking the city to adopt that at the Dec. 14 meeting. Basically it’s working with Mendocino County — the four incorporated cities — and the Mendocino County Office of Education. It’s our response to emergencies and trying to mitigate the loss of property, lives and resources,” Miller said.

The Hazard Mitigation Plan can’t be accessed at this point from the county website about it (only available to those with a password). There is little information in an executive summary, which says the grant-funded plan is a prerequisite for getting certain funds during an actual disaster.

“The 2020 MJHMP Update will cover each of the major natural hazards that pose risks to County infrastructure and residents. Recognizing that successful mitigation planning efforts must be communicated and understood by the public, the county approach will include stakeholder participation and input with the use of cutting edge GIS technology to map and update the hazard information for each hazard profiled in the 2020 MJHMP,” the executive summary states.

Also, the city’s department heads have been working on an evacuation plan and maps for the city of Fort Bragg. “We will be bringing those to you on Dec. 14 just as a preview. We basically have created zones throughout the city,” Miller said.

Miller said maps will be placed at local hotels, so that guests can know what zone they are in during an emergency. Miller said this came about based on a story that Councilman Lindy Peters told the council about being at The Flamingo Hotel in Santa Rosa during a fire emergency and having difficulty translating the Sonoma County system or knowing just what to do. He drove home safely.