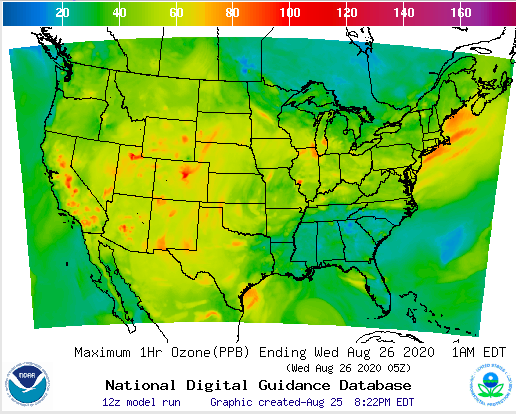 MENDOCINO CO., 8/25/20 — Air quality is dangerously poor in parts of inland Mendocino County due to smoke from the fires raging in Mendocino National Forest and Lake and Sonoma Counties and according to a National Weather Service meteorologist, smoke will likely persist as long as the recent fires started by the August lightning storms continue to burn. With no cooling events, winds to blow the smoke away, or large rain events on the horizon, smokey conditions are expected to stick around for a while.

The smoke is carrying with it tiny, hazardous liquid and solid particles that, when inhaled, can cause serious respiratory and heart problems. If exposed to these dangerous particulates for 24 hours, people may start experiencing adverse health effects.

In order to stay safe, and decrease risk of illness caused by smoke, the EPA encourages people who can to stay indoors as much as possible.

The tiny hazardous particles, or “particulate matter 2.5” — fine solid particles and liquid droplets in the air that when inhaled, can move deep into the lungs, and sometimes blood stream, causing serious health problems. In Mendocino County, PM2.5 levels are elevated in Willits, Redwood Valley, and Ukiah, among many other places.

With higher concentrations of PM2.5 comes lower visibility. In Ukiah, visibility is down to 1.5 miles, according to Ryan Aylward, meteorologist at the National Weather Service’s Eureka station. On a good day, visibility is between 20 and 30 miles.

“As visibility decreases, that’s your sign that air quality is getting worse,” said Aylward. “If the smoke concentrations are getting to a point where you can’t see very far, that means the air quality has gone down. So that’s kind of your indication that it’s time to stay inside and not be going outside and recreating or something like that because the air quality has gotten bad.”

According to the Federal Environmental Protection Agency, PM2.5 exposure can irritate asthma, lead to irregular heartbeats, nonfatal heart attacks, premature death in people with heart or lung disease, respiratory irritation including coughing and difficulty breathing, and generally reduced lung function. This is, of course, especially worrisome as COVID, a dangerous and sometimes deadly respiratory illness, continues to spike in California and Mendocino.

Mild atmospheric conditions are adding to the problem. Without wind to blow the smoke away from areas near the fires, it is settling and accumulating in river valleys. Aylward explained that each afternoon, when the air is warmer, the fires get more active, producing more smoke. Then, at night, the smoke sinks into nearby river valleys. “The longer that happens the more smoke concentration gets stuck in valley floors,” said Aylward. “If it’s not windy and there’s a fire nearby, that smoke isn’t going anywhere, it’s just going to sit there and keep collecting.” As the concentration of smoke increases, air quality will decrease.

According to AirNow, a partnership of the EPA, NOAA, NPS, NASA, CDC, tribal, state and local air quality agencies, PM2.5 levels in Willits, Ukiah, Covelo, Redwood Valley, and Philo, among other places have been in the 151 – 200 range all day, meaning the air is unhealthy to breathe. According to the EPA’s daily air quality tracker, PM2.5 levels in Mendocino County are usually in the 0 – 50 range.

To the south, in Sonoma County, and to the east, in Lake County, the situation is worse. Sensors from PurpleAir show pockets of air quality in the 201 – 300 and 301 – 400 ranges near Cloverdale in Sonoma and Clear Lake in Lake County.

The EPA, in their Wildfire Smoke Guide for Public Officials, encourages people experiencing a smoke episode to stay indoors, reduce physical activity, store food to avoid going outside, and turn on their air conditioning to filter air.

They also advise that people wear the now well known N95 masks, face masks which capture about 95% of particles passing through it.

PM2.5 has negative environmental impacts as well. It can change the PH balance of lakes and streams, alter the nutrients in coastal waters and rivers, deplete soil nutrients, damage forests, crops, and ecosystems, and compound the effects of acid rain.

Aylward doesn’t expect the smoke that’s causing air quality to diminish to dissipate any time soon. He believes as long as the fires are burning, and there is no major rain, wind, or cooling event to help put the fires out, the smoke will probably stick around. “Right now the trends and forecasts over the next couple of weeks don’t show any big cool down,” he said. “We have highs in the 90’s up to near 100 for a while and in that situation I wouldn’t expect much change when it comes to the atmospheric conditions that will result in smoke drifting down to the valleys every night.”

Aylward says it really comes down to what the fires do, that while the fires are still raging, the poor, dangerous air quality will be present. The August Complex, in Mendocino National Forest, is 181,051 acres and 11% contained (as of 11:00AM august 25), the LNU lightning complex in Napa and Sonoma is 392, 513 acres and 27% contained (as of 2:38 PM).

“The big question is what does the fire do? Are they able to put it out? Where is it located? Is it in really steep terrain? Aylward explained that as the August Complex is in steep terrain that increases the challenges of fighting a fire, he wouldn’t be surprised if the fire was around for quite a bit of time. “It’s very possible that we could have the smoke drifting into the valleys every night as long as that fire is still active. Or, there are other fires in the south, so depending on which way the wind is drifting that day, those fires could impact southern Mendocino as well,” said Aylward. “It’s not a good combination to basically have three large fires all around you.”