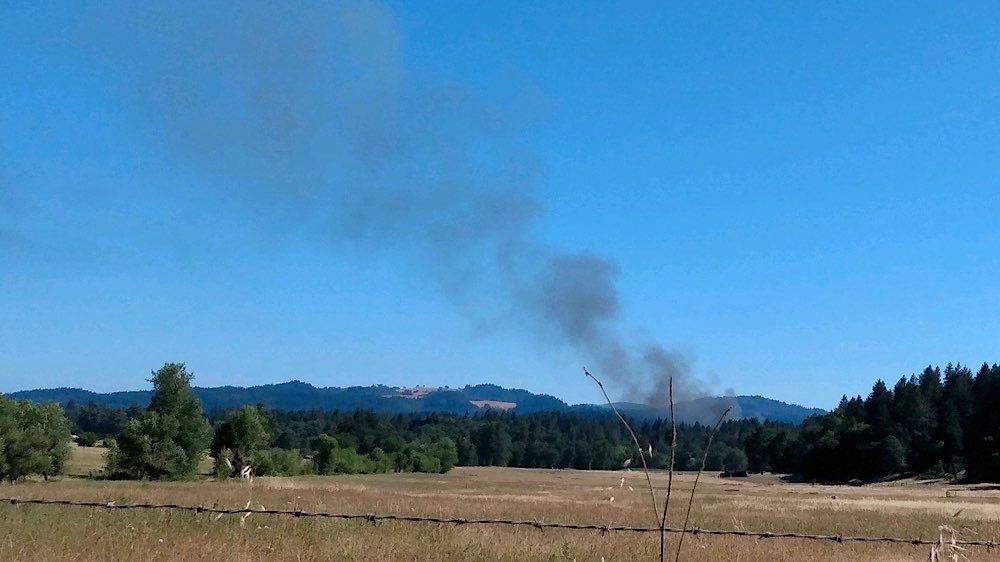 A view of the smoke plume of the North Fire, as seen from Creek Rd.

UPDATE 5:02 p.m. — Cal Fire has revised the size of the fire down to .5 acres. The fire is contained but personnel will remain on the scene for some time to Moo up.

UPDATE 4:57 p.m. — Resources that were on the way to the fire are now being cancelled, though others continue on their way to assist with mop up. Smoke may persist for a while, but it is diminishing now.

UPDATE 4:50 p.m. — Firefighters have made good progress in getting the fire contained and have hose line most of the way around. However, due to logs and vehicles burning on the interior of the, estimates are that it will take several hours to fully extinguish and more to mop up.

UPDATE 4:35 p.m. — Firefighters are one the scene, and Cal Fire is reporting that the fire is currently at 1.5 acres, though moving quickly. Air tankers have arrived, though retardant drops are difficult due to close proximity of structures and bystanders.

WILLITS, 7/5/20 — A new fire has broken out in Laytonville. The fire is being referred to as the North Incident, and is burning at the intersection of North Rd. and Branscomb Rd. just outside of the town of Laytonville.

Several fire departments have responded, as well as a Cal Fire copter, two tankers and the Air Attack plane.

No word currently on whether any structures have caught fire, nor on the size of the blaze.