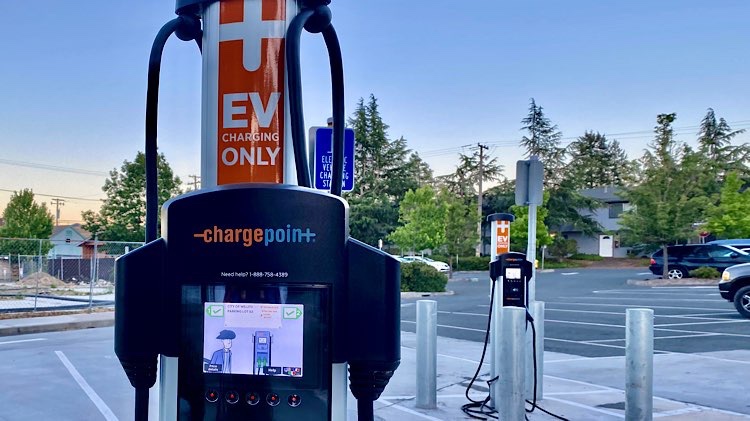 MENDOCINO Co., 7/1/2020 — Mendocino and Sonoma County residents will be able to apply for rebates to install electric vehicle charger equipment in various public venues, including businesses, apartment complexes, and municipal buildings, starting on July 8. The project could result in the installation of as many as 550 new electric vehicle chargers throughout Mendocino and Sonoma Counties, of both high speed and lower speed chargers.

The funds will come from Sonoma Clean Power, which will be providing $6.75 million in grants for electric vehicle chargers in Mendo and Sonoma through their Sonoma Coast Incentive Project. The project is part of a statewide effort to electrify transportation, reduce emissions and ultimately, confront climate change.

The rebates, which will cover equipment and installation costs are available to any commercial properties, businesses, workplaces, tribal locations, cities, non-profits, multi-family apartment units and other public areas on a first come, first serve basis, regardless of income.

While the grant is available to applicants in both Sonoma and Mendo, the lionshare of the $6.75 million fund, $6 million, is allocated for Sonoma county, with the remaining $750,000 set aside for Mendo. In addition, applicants in Ukiah, Willits, Laytonville, and Leggett are not eligible for HC Fast Charger grants, only lower speed chargers, as those towns are deemed to already have sufficient HC Fast Chargers.

However, Sonoma Clean Power will award at least 25% of the funds to applicants from unincorporated, low-income, and disadvantaged communities (see note below).

The application will be available on the Sonoma Coast Incentive Project page on July 8.

Lomeli said the application process is short — just a few questions about the type of equipment the applicant wants to install and where precisely the installation would be. The Center for Sustainable Energy, a nonprofit organization working to decarbonize, will then review the application. Sonoma Clean Power expects the turnaround time to be 20 days, although they noted there could be delays. Meaning people could begin construction by this summer.

If accepted, Sonoma Clean Power will reserve the appropriate funds and the applicant can then go ahead and install the electric vehicle charger.

Once the recipient completes the project, they must send photos, invoices, permits, and other information back to Sonoma Clean Power in order to receive their money. They will not receive any funds until the project is completed.

The cost of installing an electric vehicle charger is highly variable. According to a 2015 US Department of Energy Report, installation can cost anywhere between $300 and $51,000 depending largely on the type of charger. A DC Fast Charger, which can fully charge an electric vehicle, which means 100 miles of charge for most electric vehicles, in less than 30 minutes costs between $4,000 to $51,000. A Level 2 charger, which adds about 25 miles per one hour of charging, can cost between $4,000 to $6,500. However, these charging times and distances may differ depending on the car.

Sonoma Clean Power will provide a rebate of up to $7,500 for Level 2 Chargers and up to 75% of the total cost for DC Fast Chargers.

The California Energy Commission made the decision to allot just over 11% of the money for Mendocino County based on data from the United States Department of Energy’s Alternative Fuels Data Center, which studies how many existing chargers are stationed in certain areas and how many will be needed to meet former Governor Jerry Brown’s goal of 250,000 electric vehicle chargers by 2025 and five million electric cars on the road by 2030.

Sites with mailing addresses in Laytonville, Leggett, Ukiah and Willits are not eligible for DC Fast Charger funds. This is due to the amount of chargers already functioning in those towns and perceived levels of need from the United State Department of Energy’s Alternative Fuels Data Center.

The Sonoma Coast Incentive Project hopes to encourage electric vehicle use by subsidizing the installation of electrical vehicle charging stations as part of a state initiative to reduce transportation emissions. In California, the transportation sector generates the largest share of greenhouse gas emissions in — 41%.

The ultimate goal of this whole project is to battle climate change. “Part of Sonoma Clean Power’s mission is to reduce emissions because that is a way to reduce climate change,” said Lomeli. “We can do that by electrifying transportation and getting more electric vehicles out there. There hasn’t been as big of an investment in rural and coastal areas as there has been around the 101 corridor. Investing in communities and providing them with the charging station they need provides additional incentives to make that possible. Transport is our number one emission source and we want to tackle that.”

*Sonoma Clean Power is defining low-income as areas that are designated as such by the California Department of Community and Development’s 2016 State Income Limits or census tracts (areas that encompass a population between 2,500 and 8,000 people) that are at or below 80% of the statewide median income. The California median income is $71,228. Disadvantaged communities are areas identified as the top 25% most impacted census tracts by the California Office of Environmental Health Hazard Assesment’s CalEnviroScreen 3.0.