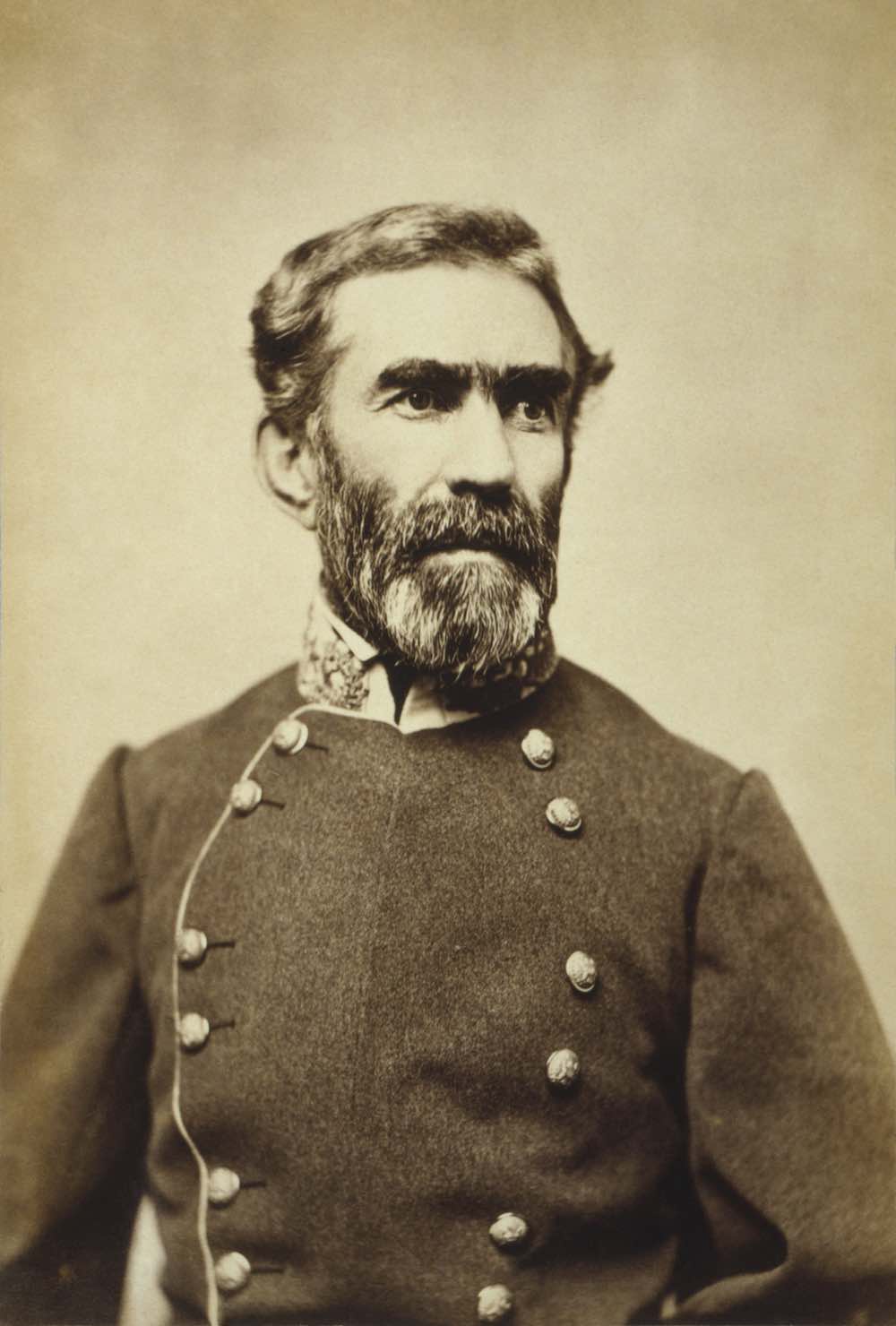 FORT BRAGG, 6/19/20 — Fort Bragg’s first in-person city council meeting of the Covid-19 era will be devoted to changing its name—something very few California cities have managed to do in the past century.

Following a succession of ebullient and peaceful Black Lives Matters protests in Fort Bragg as part of the national movement following the killing of George Floyd by police in Minneapolis, locals and out-of-towners demanded that the city axe the name of slave-owning Confederate General Braxton Bragg and come up with a new moniker.

Because it’s too late for a public initiative process to put a measure on the November ballot, Fort Bragg Mayor Will Lee agendized an item that would allow the City Council to place a question on the ballot; consideration of the matter will consume most of Monday’s 6pm meeting at Fort Bragg Town Hall.

Although dumping Bragg’s name has come up at least twice in the past, the public reaction this time is off the charts. Multiple petitions have gathered thousands of signatures on both sides, with those opposing the name change taking a huge lead. Governor Gavin Newsom weighed in with a tweet, calling the change “the right thing to do.” Social media groups have been formed and drawn hundreds. Both sides, in the spirit of unity, have offered creative solutions. National and state media, such as KQED, ABC News, the San Jose Mercury News and others have rushed into town to interview residents.

So far, the most successful effort to retain the town’s name has been led by 34-year-old Ryan Bushnell, a newcomer to the political scene but a long-timer in Fort Bragg. A Change.org petition pushed by Bushnell gathered more than 1,600 signatures by Thursday afternoon. The petition asks that voters, not the council, put the name-change on the ballot—meaning it couldn’t happen until 2021.

“Last Saturday morning I saw something about changing the name, and for some reason it just got me this time,” Bushnell said. “This comes up and goes away every five to ten years.” He started a Facebook group and publicized the petition, thinking he might get a hundred people to sign up. Instead, opposition to the name change quickly ran into the hundreds.

Many objected to the idea that history can or should be changed.  Others focused on the cost. In the agenda packet, City Manager Tabatha Miller estimated initial costs at more than $270,000 (the agenda packet alone runs to more than 120 pages of comments about the issue). Bushnell pointed to recent layoffs of public works personnel and said there were many better and more crucial ways to spend money.

Here’s a brief breakdown of the costs — story continues below:

What Would It Cost?

Process name change with local, state and federal government agencies, on outstanding contracts and on banks and financial accounts, etc. $10,000

Bushnell, a 2003 Fort Bragg High graduate, volunteer firefighter, youth wrestling coach and county public works employee, looked at the names of people signing his petition and realized this could be a great way to bring the community together. “I saw names of people from all sides of the political realm, including extremes on both sides. It’s cool to see,” Bushnell said.

Most of those people are from longtime Fort Bragg families. One can drive the 100-plus-year-old streets of town and see street names matching the names of people still populating the schools, offices, and businesses of Fort Bragg today. A study by the school district a decade ago showed Fort Bragg boasted one of the state’s highest percentages of people who have been in their homes for decades. A look at Fort Bragg High’s graduating classes going back to the ‘70s shows a very high percentage of people still active in the community.

City Manager Miller said Monday’s meeting will only allow about a dozen people at a time to enter town hall due to social distancing.  Because of the tremendous interest in the name change issue, all other issues will be moved to a special meeting on June 29.   Monday’s meeting will include the consent agenda and a late addition of an agenda item that would allow the police department to reject applicants based on any prior misconduct.

Miller said the city asks people to watch the meeting live stream, or on channel 3, to avoid a large crowd at Town Hall. The city considered returning to an online meeting for Monday (the town had just returned to in-person meetings). But Miller said, “We didn’t want anyone to think that was done to curb the conversation.” She said e-comments can be submitted during the meeting, and everyone can submit comments ahead of time. People outside will be cycled in and out. Social distancing, with chalk marks, will be practiced outside. Masks are required to be worn at all times in accordance with state guidelines.

The naming of the town began in the pioneer era. Horatio Gates Gibson, a lieutenant serving at the Presidio of San Francisco, established a military post in 1857 to keep control of Natives confined to the newly established Mendocino Indian Reservation. He named the post for his former commanding officer in the Mexican American War, Braxton Bragg. The city was incorporated three decades later, in 1889. Bragg served as a general in the Confederate Army during the Civil War. Ironically, his once admiring subordinate Gibson remained in the US Army and fought for the Union. Bragg was a slave owner of more than a hundred humans, which may have ensured his allegiance to the Confederacy.

The Fort served its ugly purpose rather quickly, surviving only eight years, much to the confusion of tourists who visit today, in search of a fort. “For the next eight years, troops stationed in Fort Bragg subjugated the indigenous population, participating in violent campaigns against Native Americans as far north as Shelter Cove,” wrote Eilas Henderson in comments for the agenda packet. “After many of the remaining Native Americans were forcibly marched to Round Valley in 1865, the military post was abandoned. Thus ended the brief military history of Fort Bragg.”

Sierra Wooten, 33, a leading activist in the Black Lives Matter movement locally, wants to listen to others about their reactions to the name change.  She says local indigenous people and tribes should have a chance to weigh in on the new name, if there is to be one. “Maybe we keep the name, and we don’t have to go through the financial burdens so many people are concerned about,” she said. “We paint murals and do more to learn our history, we have more real education everywhere.”

Wooten said local indigenous people plan to attend Monday’s council meeting “We know tensions are high with this name change matter, but we want to take a moment to let the Natives speak at the City Council meeting and we are requesting a Task Force be set up to help with this effort that ensures that the Natives have final input on any name that would profit off tourism,” Wooten said in an email. “They have already been exploited enough. They do not want the city to use any name in their language if they don’t own the land. It’s time for us to start screaming Indigenous Lives Matter! We must listen and consult with the Natives first. I could care less about bottom lines. People Matter!” Wooten wrote.

Wooten understands the pain of those fearing to lose history and hopes those people can also understand how people of color have been excluded from history. Bushnell also hopes there can be some compromise, such as the idea suggested by others on social media of officially naming Fort Bragg for another, more respected and less racist military man named Bragg, or perhaps someone like Dr. Patricia Bragg, health food guru of the Bragg vinegar company.  Some have even suggested just Bragg or Bragg About for the name.  Most ideas for new names included Noyo or something like Point Pomo.

“I could care less who the town is named after,” Bushnell said. “The history I have is my pride in what I have experienced here, the time we have all had here in our town, which is Fort Bragg.” He hopes that the current conflict over the name change will resolve into the community realizing it can only solve big issues by coming together. “It may be a pipe dream, but I’d like to see our little community stick together, not follow the rest of the world in devaluing everything.”

California cities almost never change their names, other than to add the likes of “Beach.” The only full name change this reporter could find was in 1930 when Wineville changed its name to Mira Loma because of notoriety over the “Chicken Coop Murders.” In 2018, Monterey County Supervisors voted to rename the unincorporated Confederate Corners to Springtown, but news media reports and Google Searches show the name has not yet been changed on most maps. Many persist in using the old name, media reports state.  John Steinbeck’s novel The Wayward Bus described the area as part of the fictional town of “Rebel Corners.”

Fort Bragg has discussed a name change at least twice in the 21st century, most recently in 2015 after the South Carolina black church mass killing by white supremacist Dylann Roof. As of Thursday evening, the Native American and Latino communities did not have a big presence among the approximately 120 comments the city had received. Miller contacted a representative of the Sherwood Pomo tribe, and she mentioned that at least one Spanish radio station had been broadcasting about the meeting.

The number of signatures, Miller said, hasn’t set a record. Last year, more than 4,000 signatures were gathered to oppose Georgia Pacific selling more property on the old millsite until cleanup is complete. One comment by Richard and Julie Keaton stated, “The name is our history. It’s our kids’ histories. It’s where we have chosen to live and raise our family. It is what our now-grown children say when asked where they’re from. It is home. Many of the memorabilia and documents that our kids have include the name Fort Bragg (i.e. diplomas, awards, job histories, postcards, photos, trophies from sports teams, uniforms, etc.

Kathy Cervelli-Orsi wrote in the comments that opposing the name change does not equate to support for Bragg himself. “I, as well as everyone I have known over the years, have never related the name of our town to anyone or anything involving the Civil War. The history that we all grew up and respected was that of the hard working men and women that built this small town. When we tell people we are from Fort Bragg, California, we do it with pride. Not honoring a Confederate General, but honoring our ancestors that worked harder than we could ever imagine building this little city. I believe everyone has a right to share their opinions, but I also believe that the people of our city know that in sticking up for Fort Bragg (Ca), we are in no way supporting or endorsing anything other than our admiration toward those who actually made this a place we are happy to call home.”

Another person to file a comment with the city was Robert Bragg, who wrote that he was the descendant of Braxton Bragg and he wants his ancestor’s name removed. “My support for the name change of Fort Bragg comes from an almost lifelong antagonism for the way Europeans came to what is now called the USA and slaughtered the native population, bought and imported Africans to be slaves, and named almost everything after themselves,” Bragg said. “It matters not to me that my surname is Bragg. What matters on me is that a California city is named after a man who not only owned slaves but also was active in killing and with the theft of American Indian homelands.”