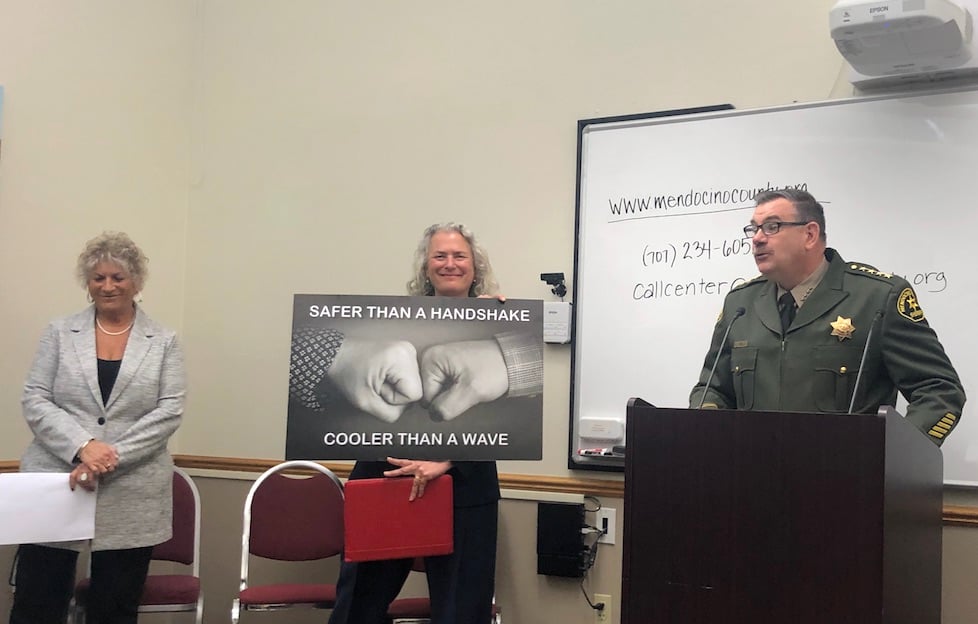 WILLITS, 5/2/20 — Mendocino County Sheriff Matt Kendall posted a statement to the county sheriff’s office’s Facebook page this afternoon in which he urged a change in current policies concerning the shelter-in-place order and other measured taken against the pandemic. While praising colleagues in government, such as Mendocino County Public Health Officer Dr. Noemi Doohan, the sheriff also makes clear that he, and other rural California sheriffs, are asking for a loosening of restrictions, and a devolution of power over the isolation and quarantining orders to local governments, instead of the state. In doing so he cites the increased reports of domestic violence, the unique challenges as well as advantages of rural counties, and the declining health of the economy.

(Read the statement below)

Asked for comment on the sheriff’s statement, Public Health Officer Doohan said through an aid that she had none.

Supervisor John Haschak when asked for comment highlighted the shared sacrifice of everyone, and the need to heed the advice of medical professionals and scientists, while also pointing out that the counties do have some leeway and that a staged reopening would be happening soon. Indeed, the beginning of the staged reopening might happen as soon as May 11, and Gov. Newsom has indicated that it may be days before certain restrictions are loosened. (Read all of Haschak’s remarks below)

Supervisor John McCowen supported the sheriff’s statements, in a brief interview, saying that he believes that preparation made during the SIP along with wide adoption of social distancing will allow for safe reopening. (Read McCowen’s statement below)

As of time of publication the statement had been shared almost 300 times on Facebook, and a great number of people had commented to support the sheriff. Still, others voiced concerns that a loosening of restrictions would bring tourists, and with them the danger of spreading COVID-19. In this week’s Mendocino County Board of Supervisors the sheriff was adamant about respecting the rights of motorists and tourists, in response to pointed questioning from Supervisor Ted Williams.

Kendall’s statement is directly below, but a couple of key point of context are worth repeating. Under various different sections of the California Constitution and Government Code, California Governor Gavin Newsom made various executive orders, at the beginning of the pandemic crisis giving he board powers to issue and enforce public health measures. Thus there currently exists an executive order from the governor mandating the shelter-in-place, along with a slew of other new orders, some of which enforce restrictions, and some of which loosen other laws. Within the structure of county government, as laid out in the California Government Code, during times of public health emergency a county’s public health officer has the ultimate authority to issue public health orders, which are enforceable as law by the county sheriff, and cannot be overturned by a county’s board of supervisors.

Here is Kendall’s statement as directly copied and pasted from Facebook.*

As Sheriff of Mendocino County, my first duty is the protection of the public. That includes the protection of basic civil rights. Included in the Declaration of Independence [edited] is the right to life, liberty and the pursuit of happiness.

When the COVID-19 virus was first identified there were many unanswered questions, and there was real fear that it would devastate our country. With that fear and the unknowns, we enacted health orders and government restrictions that were extreme in an attempt to get ahead of the virus and flatten the curve. At this stage of the epidemic, I think we have had great success.

With any fight we must continuously re-evaluate the tactics in which we fight. Measured responses to what is occurring and where it is occurring are needed at this point. We now know much more about this virus and what it can do. As such we now must look at the progress of the pandemic in light of the unintended consequences of our tactics.

As your Sheriff, I see many problems that were not intended. These problems relate to people being restricted to the point they succumb to depression, violence, abuse within the home, and real fear about the inability to make a living. It is time to re-evaluate.

My staff and I are very appreciative of where our money comes from. We’ve had the luxury of having paychecks come in regularly but we can’t forget where those checks come from. With the stock market being down, people being out of work, people’s life savings are going away and their ability to retire, all those things are in question right now. We must keep that in mind as we re-evaluate going forward.

I’m encouraging the Public Health Officer to look at all of our businesses individually and make the best decisions balancing the needs of public safety and the economy.

Yesterday I initiated a remote meeting with other rural county Sheriffs who feel much the same as I do. We all share the concern with the rise in violence and restrictions on our residents.

I met with the Public Health Officer Friday evening and encouraged changes that need to be made in Mendocino County. Currently the Governor’s office has enacted shelter in place orders throughout the state. Some of these orders appear to me to be an attempt at making a “one size fits all” order. An order such as this, although convenient, I don’t believe takes into account the needs of all. The bay area counties look nothing like Mendocino County and their challenges are much different than ours. I believe we have reached a point where we need to think deeper and create a path that works for our rural communities.

I have encouraged the Governor’s Office to place the decision making back into the hands of our local government. Currently we can’t issue orders which are less restrictive than the orders of the Governor.

From the onset of the pandemic I have made it extremely clear enforcement of the Public Health Officer’s orders would be conducted with an emphasis on education. I absolutely believe and see evidence on a daily basis we have intelligent reasonable people living within Mendocino County.

To this point, we have issued warnings to persons who needed them while the remainder of our residents have continually done the right thing. I can do this because the law grants me discretion to enforce laws in a manner that is reasonable and justified.

Going forward I encourage all residents to follow the guidance of the Public Health Officer to the extent they are able to do so. It is not my intent to criminalize otherwise good law-abiding people. I will continue to act on your behalf on what I believe to be right.

Supervisor John Haschak’s comments made during a brief telephone interview

We’re all suffering from this shelter-in-place and whether it a small business that’s closed, or workers that had hours cut, or were laid off, or families that have to do there school work at home, or people who are cooped up and tired of being cooped up, and people who are out there by themselves and are lonely — there’s a lot of suffering happening

But what we really need to do is listen to the doctors medical professionals, the scientists, and listen to what they’re saying and follow their guidelines as best we can. It’s our responsibility to keep everyone in our community safe and by following these guidelines that’s what we can do as responsible people.

I agree with Sheriff Kendall that we need more of a localized approach. Conditions are very different in Mendocino County — we have zero community spread** very few cases we’ve dramatically increased the capacity of the health care industry…But we have many businesses that have been operating with inconsistent social distancing and we’re still not getting a lot of cases. That tells me all the other locally owned businesses, now considered non-essential, could reopen with strict social distancing and minimal risk.

….I did go out for groceries today in contrast to just a couple of days ago I see more and more people are complying with social distancing it seemed to me the great majority of people do have facial coverings again, which all argues in favor: of its time to allow local businesses to reopen with appropriate protocols in place.

*An earlier version of Kendall’s post stated that the rights of “life, liberty, and the pursuit of happiness” are enshrined in the Constitution, when in fact they are stated in the Deceleration of Independence. The sheriff then updated the post including the comment “[edited]”. We not that because brackets generally indicate a publication’s correction, and did not want to give the false impression that we had edited the sheriff’s words.

**There is no confirmed cases or significant evidence of community spread in Mendocino County, but there has also been a