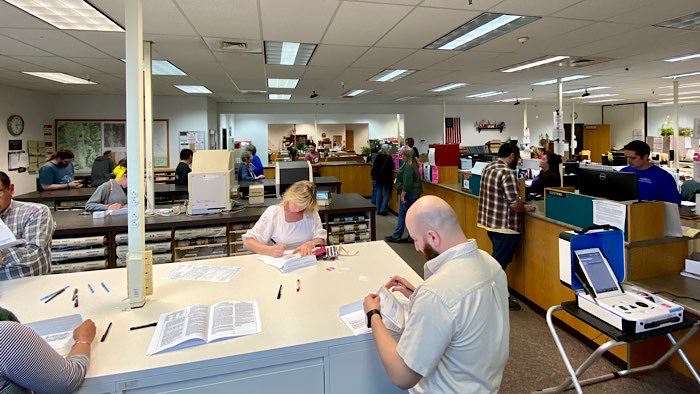 UPDATE 3/4/20, 2:20 a.m. — Mendocino County’s last carload of ballots arrived from the Point Arena and the south coast polling station around 12:15 a.m. on election night, and Mendocino County Registrar-Recorder Katrina Bartolomei certified and published the the last iteration of publicly available results by shortly before 1 a.m.

Still, though the results had been posted to the county website, and faxed in to the state, she and three staff members remained in the office waiting for a phone call from the state to verify their results, which came around 1:30 a.m. to small cheers from the group. (Click here for full results)

In the First District McGourty has a commanding lead, though not quite an outright majority, with it being very likely the Jon Kennedy will join him in a general. As mail-in ballots that were mailed, or dropped off yesterday, continue to trickle in this week the results might change — leaving this race up in the air. In District 2 Maureen Mulheren lead the pack, trailed by Mari Rodin, and the two are almost certain to face off in the run-off. In the Fourth District the incumbent, Supervisor Dan Gjerde, won the race, with a commanding 19 point lead as of tonight. His substantial outright majority victory won’t be overcome by additional votes and eliminates the need for a run-off.

In the measures, the Fort Bragg, Ukiah, and Willits school bond measures remain too close to call, though currently losing. Mendocino did pass their school bond measure. The Coast’s hospital district’s Measure C also resoundingly passed. And though it is not absolutely certain, it appears incredibly likely that both measures D and E, a transient occupancy tax measure and advisory measure, both passed.

The final published count for Tuesday included 12,815 ballots counted, out of a possible 51,968 registered voters in the county, and Bartolomei said nearly 4,000 ballots had arrived between Monday morning and 1:30 p.m. on election day. Since mailed-in ballots will be accepted through Friday, Bartolomei hesitated to venture a guess as to how many more remained to be counted before the final results were in, or when the final canvas will be completed. Mail-in ballots will continue to trickle in over the next few days, and mail-in ballots that were dropped off on Election Day have not been counted. The county has hired six “extra help” temporary employees to help with ballot counting and certification, who will continue working until the final results are in.

Bartolomei was elected in 2018, and said her first run at managing an election in the role had gone well, adding that her former boss and retired registrar Sue Ranochak had come in to help out as a “runner” on election day. She noted that the passage of California’s newest election-related legislation, Senate Bill 207, had created a “stumbling block,” due to a high volume of voter questions, with the phones ringing at the registrar’s office all day, as well as confusion from voters and additional work for polling place volunteers. The urgency legislation, which was signed by Governor Gavin Newsom in February and went into effect prior the election, allows voters to change their address or party affiliation up until the closing of the polls without re-registering, which Bartolomei said was, “rough on the workers, but they did a great job.”

Bartolomei noted that due to the new regulations, some poll workers had concerns that they might run out of ballots, but that she was unaware of that happening anywhere, explaining that the Hart Verity machines were in place to use as back-up in that circumstance. She said that one point on election day, poll workers in Brooktrails thought that they’d run out of ballots, but subsequently discovered 100 stored away.

She was very pleased, however, with the county’s two new Hart Verity voting systems, which can provide voters with a print-out that replicates the county’s ballot. Bartolomei noted she was considering purchasing a third as the scanners made the process “amazingly fast,” in part by facilitating ballot adjudication, and that Ranochak had also been impressed upon watching them in action.

In response to concerns from voters who said they had not received ballots, Bartolomei explained that this year, the first and second round of ballots had been mailed by a contractor, but that the county’s computer system indicated all of those had been delivered, and she could not confirm any potential issues with the contractor on Tuesday evening.

She did note that any replacement ballots requested by voters had been mailed by the county, and that in her experience it was not uncommon for voters to request a second or even third ballot having accidentally misplaced the first, but later find the original, which then comes to staff attention since any additional ballots issued to that voter must voided once one ballot is processed. “I’ve voided a number of second and third ballots today,” she said.

Here are some numbers below, concerning the number of votes as it relates to the population of the county. A total of 12,815 votes have been counted so far, out of 51,968, equaling 24.66% of registered voters. The total population of the county is 88,606 people as of 2018, according to the Census Bureau, and of those 69,644 are adults over the age of 18 — meaning that the current number of ballots amounts to about 18.4% of adults in the county.

Here are the results; here’s the county’s election webpage including results for presidential primaries and other candidates not listed here.

UPDATE 10:40 p.m. — Same day ballots have begun to be counted, and with 39.13% of precincts reported vote percentage remain largely similar, though certain races have tightened up. However, Glenn McGourty in the First District has received 53% of the in person ballot vote, and if this lead maintains he might actually win the race in this vote, and obviate the need for a run-off.

Supervisor Dan Gjerde said in a brief statement to The Mendocino Voice, “I’m grateful to the voters for what looks like a substantial victory. I want to thank my supporters for their continued efforts towards my re-election. I look forward to the ongoing work of being the Fourth District’s advocate as as member of the Board of Supervisors.”

UPDATE 9:35 p.m. — The first batch of results are in! These reflect only the count from the mail-in-ballots that had arrived at the Mendocino County Election Office by today. These results do NOT include any results from the in person polls today. In District 1 Glen McGourty has a commanding lead followed by a closer race for second place between James Green and Jon Kennedy. In District 2 Mo Mulheren has a large lead follow by Mari Rodin then Joel Soinila. And in District 4 Supervisor Dan Gjerde currently has a 15% lead over Councilman Lindy Peters.

Mulheren, who currently leads and is most likely to go into the run-off election in November, said at a celebration dinner at the Ukiah Brewing Company, “I’m very proud of everyone; and I’ve put in a lot of work letting people know where I stand on the issues and I think it paid off.”

Also at the Ukiah Brewing Company McGourty said, “I’m really pleased with where I am now, and I like I can build on the very broad collation of supporters.”

And also at the Ukiah Brewing Company, Rodin, who currently has the second number of votes in the Second District said, “I’m very happy to be in the run-off.” She elaborated that she believed that the longer campaign period offered by the run-off election would allow her to reach more people. She noted that she’d has 146 separate people donating to her campaign and thought that would translate into a stronger campaign in the months to come.

James Green, running in the First District, and also at the Ukiah Brewing Company said, “Win or lose this is a good night for democracy. The District 1 candidates all brought to light the issues that needed to be discussed and I’m very proud of the campaign I ran, keeping it a positive and substantive race.”

ORIGINAL
UKIAH, 3/3/20 — Welcome to The Mendocino Voice’s election night coverage. Polls will close in California at 8 p.m. tonight and at that point the Mendocino County Elections office will release votes counted from absentee ballots that arrived by earlier today.

Once the polls close across Mendocino County, all of the dedicated volunteers doing the essential work of running will bundle up those ballots and begin delivering them to the Elections Office at the county administrative building on Low Gap Road in Ukiah. There the votes will be counted and the elections office will put out new tabulations every two hours. They will count all of these in person votes tonight, even if it requries working into the early morning — and it likely will. Given the large size of the county, some ballots will not make the drive back to Ukiah until late tonight, in particular ballots arriving from Point Arena and Covelo.