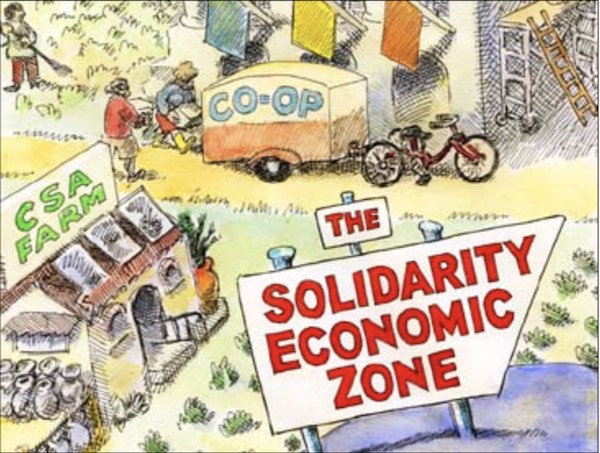 Image from the event flyer.

MENDOCINO Co., 4/25/19 — The basic models of business ownership in our country seem obvious — individual proprietorship, limited liability company, a public corporation — these are the some of the basic units of our social life. But, as disillusionment with many aspects of the modern economy have grown, people across the nation have begun to experiment with new forms of ownership and ways of organizing economic production. One model gaining currency is the co-operative or “co-op,” which compasses everything from consumer co-ops like the Ukiah Co-op, a business owned and controlled by the shoppers, to worker co-ops like Mendocino Art Center, and farm co-ops in which various farms pull together to own and operate vital pieces of infrastructure, like Sunkist or our own New Agrarian Collective or the Emerald Grown cannabis co-op.

These types of business models aim to introduce greater democracy to production and commerce by distributing ownership, profits and decision making among the important stakeholders including consumers, and workers — not just management and capital. This can mean that the profit from those business continue to be invested locally and go both directly to a greater number of people, and create a multiplier effect throughout the local economy — which can result in more sustainable and democratic economic development.

Here in Mendocino County, there are a number of existing co-operatives, collectives, and community organizations, but groups like the Economic Development and Financing Corporation and the Grassroots Institute want to help people who want to start these kinds of businesses.

On April 29, two experts in co-operative development will be speaking at the Caspar Community Center about the potential benefits that co-operatives can bring to Mendocino’s local economy, in an event billed as “Creating co-ops, collectives, and community organizations.” The event is organized by The Grassroots Institute, which will be presenting, for the first time, a map of over 50 Mendocino County collectives, co-operative businesses, and community organizations working in the “Economy for the Common Good,” with over 150 more nominated for addition to the map. The county-wide project will continue as more businesses are added, and community members are encouraged to get involved to nominate businesses, or start new ones!

The two visiting speakers will be Keith Davis, a community development advisor with the University of California Davis, and Emily Kawano, who works with the U.S. Solidarity Economy Network and helped mentor the Economy for Common Good map project in Mendocino. Members of The Grassroots Institute will also be talking about their local projects and how you can get involved, learn more, and support these types of business.

Here’s the current map of Mendocino County organizations, and you can find more details about the event, held on Monday, April 29 in Caspar at 6 p.m.. in the flyer included below: