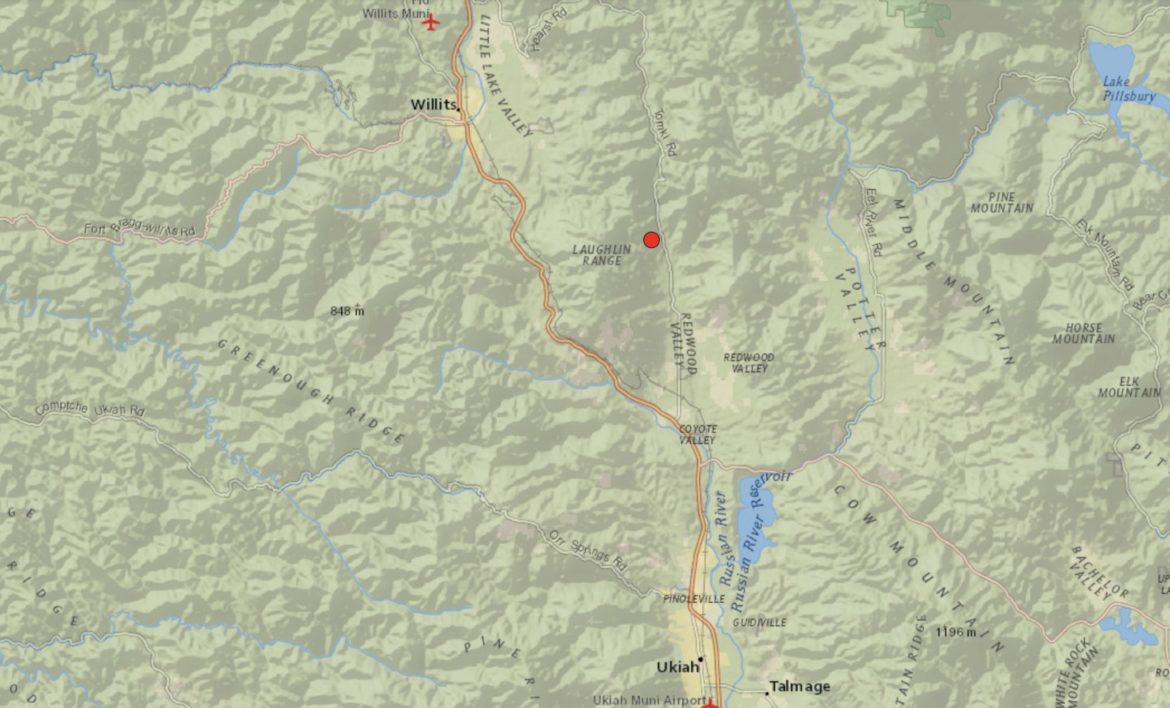 UPDATE 4/30/19 — There have been another couple small quakes since this one:

UPDATE 1:15 p.m. — Still no reports of damaged beyond cracked dishes. On another note, the initial quake was followed a half hour later by a much smaller quake within a few hundred yards of the first, measuring only 2.0, effectively too small to feel.

UPDATE 12:47 a.m. — As of about half an hour after the quake we have gotten many reports of people being woken by the quake, and getting a good shake, but so far the most damage we’ve heard of is a few spice jars and pictures falling over. We have heard that the quake was felt as far east as Lake County and as far west as the outskirts of Fort Bragg.

To reiterate, a small quake, measuring 4.3, struck at 12:16 a.m. about 6.2 miles north-northwest of Redwood Valley (for specifics about the location and other details scroll down). The United States Geological Survey initially reported the quake as 4.2 but has upgraded the quake to a 4.3.

If you’d like to contribute in a small way to science, albeit while giving Uncle Sam a bit of info about yourself, you can tell the USGS whether or not you felt the quake here: https://earthquake.usgs.gov/earthquakes/eventpage/nc73173775/tellus

WILLITS, 4/29/19 — A small earthquake, measuring 4.2 struck at about 12:16 a.m. early this morning. The USGS shows the quake occurring roughly between Willits and Redwood Valley, with the epicenter in the hills east of U.S. Route 101.

In Willits the temblor had a rolling feeling, rather than a sharp jolt, and lasted for a couple seconds.

According to the United States Geological Survey the earthquake struck at a depth of 4 kilometers, or about 2.5 miles, and 10 km north-northwest, or 6.2 miles (the map above shows the locations).

Looking at the map more closely the epicenter appears to be in the hills, between Tomkai Rd. and Mariposa Creek Rd. south of the Abhayagiri Monastery.