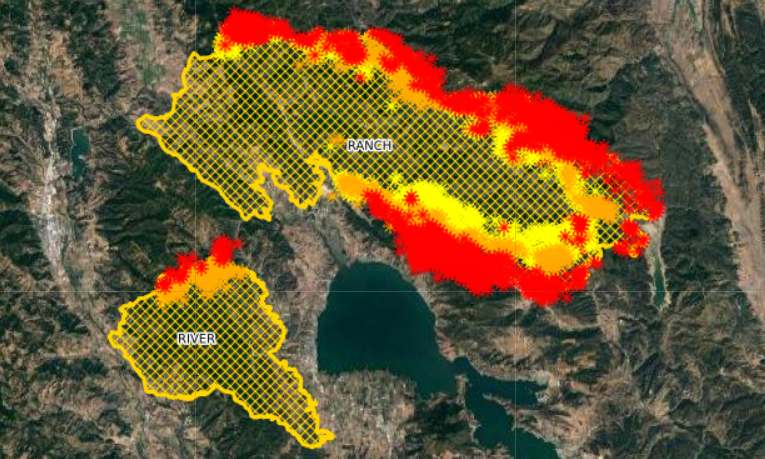 A map of Mendocino Complex Fires for Aug. 4.

Editor’s note: This article is continually updated, as new information comes in, and is presented with the latest info at the top. Please, if you want to read more general or earlier news, or if you don’t see the info you need, scroll down.

A note from the Lake County Sheriff’s Office:

California Tribal TANF Partnership may be able to help you with emergency assistance (Excluding Tribes and Tribal Members served by Scotts Valley Tribal TANF or receiving County Services) Applications will be taken at El Grande Inn, 15135 Lakeshore Drive, Clearlake, CA 95422. Saturday, August 4th and Sunday, August 5th, 10am to 5pm. For questions you can call (707)262-4400. *Do you reside in an Advisory or Mandatory Evacuation Zone *Is there at least one verifiable Native American Child in your home *Income restrictions apply Robinson Rancheria will also be at the El Grande Inn distributing Tribal Emergency Assistance for those affected by the fire

CalFire and the Colusa County Sheriff have issued a new mandatory evacuations for western sections of Colusa County, and an evacuation advisory for neighboring areas of Glenn County. The scope of this fire is truly astounding, it has now forced evacuations in three counties, and may soon force an evacuation in a fourth.

Here are the details from CalFire:

Here are the details of the evacuation advisory in Glenn County:

SAFETY MESSAGE – The public is reminded to stay vigilant on current fire conditions. Please continue to adhere to road closures and any evacuation warnings. A reminder to drive slowly and yield to emergency personnel in the area. There will be smoke in the respective areas as firefighters continue firefighting operations. If at any time you feel unsafe, please call 911.

As of the evening CalFire update the River Fire has only grown a couple thousand acres, and though the containment remains at 50%, forward progress of the fire seems to be slowing down substantially, especially on the Mendocino side — though apparently hot spots remain along Scotts Valley Rd. Firefighters have had a hard fight along that road, engaging in structure defense, and the River Fire has been creeping up the canyon that road runs through, towards Hwy. 20 where the Ranch Fire burned through. However, CalFire reports that the northeastern corner of the fire saw successful back-burn operations today.

However, even if the River Fire reaches the areas burned by the Ranch Fire, those areas have already been burned, and the areas that have not been burned have had defensive line built around.

The Ranch Fire on the other hand continues to grow explosively. It jumped up to 181,343 acres, and the official containment number dropped to 22%. The fire continued to push south toward Lucerne and other communities on the northeast shore of the lake. Fire personel poured into Lucerne, overnight and today, to preform structure defense. But high winds made things difficult and in the southeastern corner of the fire crews saw 300 foot flames.

The official count for the number of structures destroyed also jumped to 55 residences, and 49 others.

A mandatory evacuation is being ordered for the Lake Pillsbury area. Here is what the LCSD is putting out. A quick note, the “Pine Mountain” listed below in this evacuation notice is in Lake County. It is NOT the Pine Mountain located near Willits.

CalFire is repeating this information but has also put out a notice for the evacuation in eastern Lake and western Colusa:

Mandatory Evacuation Lake County:
North of SR 20, including residents with driveway access on the south side of SR 20, East of New Long Valley Road, South of Bartlett Springs Road, West of Lake-Colusa County Line. This includes the Landrum Ranch and Double Eagle Community.

Note: Two new evacuation centers for Lake County residents have been
established at:

Note: A new evacuation center for Colusa County residents only has been established at:

New mandatory evacuations have been ordered for sections of Lake County, east, along Hwy. 20 to the Colusa County. The scope of the evacuations from these fires is truly remarkable, affecting communities all around the Lake at some point in the past week.

This is a Mandatory Evacuation Notice for the Highway 20 Area East of New Long Valley Road to the Lake-Colusa County Line , including residents with driveway access on the south side of Hwy. 20.  All residents are advised to Evacuate Immediately.  Shelters have been established at Mountain Vista Middle School in Kelseyville.

This includes the Landrum Ranch and Double Eagle Community.

The word firefighters keep using to describe the Mendocino Complex fires is “dynamic.” These are dynamic fires, with dynamic conditions. And this little bit of firefighter euphemism seems as good as any way to describe the incredible situation that has befallen Mendocino, and especially Lake Counties. The River Fire is coming increasingly under-control and its rate of growth has slowed substantially, while on the other hand the Ranch Fire continues to explode in size, threatening most of the northeast shore of the lake, including the communities of Nice, Lucerne and Clearlake Oaks, which all remain under mandatory evacuation. When counted together, the Mendocino Complex fires now constitute the seventh largest fire in recorded California history, with a current combined total acreage of 201,471 acres.

Hwy. 20 remains closed, Hwy 175 was opened yesterday, the area of Cow Mountain remains under mandatory evacuation, as it was yesterday, and adjacent areas remain under the same advisory they were under yesterday. Elsewhere in Mendocino County the re-population and advisory orders remain in effect.

But first the good news: overnight the River Fire grew by only about 2,500 acres to 44,793 acres. And though there was substantial direct firefighting and structure defense along Scotts Valley Rd. yesterday and last night, firefighters have established dozer-lines in the area between Hwy. 20 and the fire line, and are preforming backfires there to contain the blaze. Many people in the Ukiah area have seen renewed smoke or even flames from these operations, but the fire remains mostly to the east, and much of the new smoke is due to these backfires, which are part of efforts to control and contain the fire. Though an evacuation warning remains in effect for areas abutting the hills towards the fire, firefighters are confident in their ability to contain the River Fire up in the hills. There are around 4,000 acres of unburned land between the dozer-lines the fire line, much of which firefighters plan to backfire today — meaning that smoke and flames could be visible through the day as the backfiring operations continue.

Last night a TV station in Sacramento broadcast a report that the fires had merged in the Blue Lakes area, without first vetting or fact-checking that information. They were wrong, the fires still have not merged, and remain separate fires. And though the River Fire has come withing a couple miles of Hwy. 20 along Scotts Valley Rd. that is a section of the Ranch Fire that has been entirely burned out — meaning that if the fires were to “merge” it would mostly be be the River Fire hitting burned out areas and containment lines. For our full report on that see this article.

On the other hand, since yesterday evening’s update, the Ranch Fire has grown another 41,428 acres to 156,678 acres, and continues to explode to the north, east and south. That’s more acreage burned in one night, than last year’s Redwood Fire burned during it’s entire duration. The fire has now expanded from its origin on Hwy. 20 near Potter Valley, approximately 30 miles east to the Indian Valley Reservoir, where the Pawnee Fire burned just weeks ago.

Along its southern flank the fire is menacing Nice, Lucerne and Clearlake Oaks, having reached the outskirts of Lucerne. Firefighters had build dozer lines, but with strong wind conditions predicted, there is a “high likelihood” that the fire will jump these lines and push down towards the lakeside communities. Firefighters are preparing for structure defense in Nice, Lucerne and Clearlake Oaks. (For the full morning fire report scroll down to view the video).

To the north the fire continues to burn into the Mendocino National Forest, and to the east the fire is burning past the Indian Valley Reservoir and firefighters are working hard to build dozer line to protect the communities around Stonyford.

Here is the morning fire update from CalFire:

And here is a video of the community meeting held in Lake County yesterday, which included CalFire, the United State Forest Service, and the Lake County Sheriff’s Department:

And here is our coverage of the fire from yesterday:

Here is the morning fact-sheet from CalFire and a map of where the fire stood as of this morning: