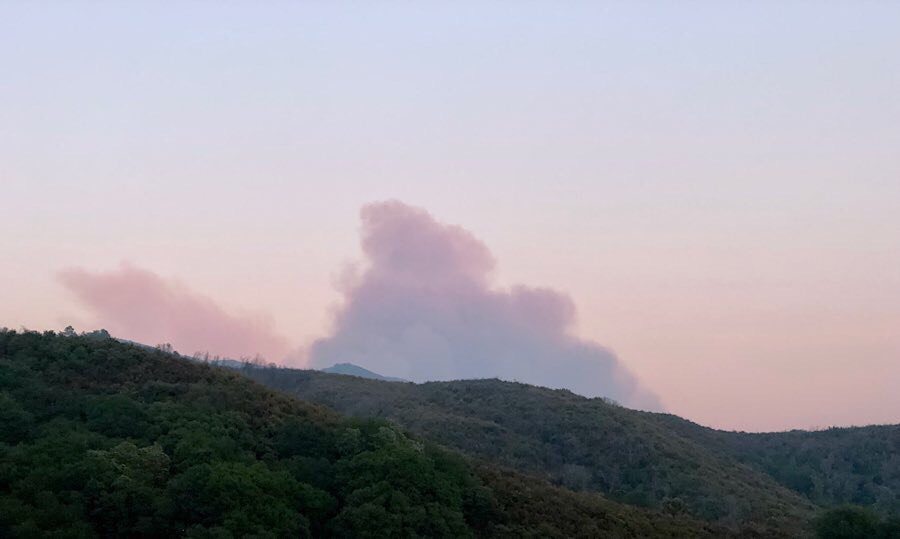 A photo of the small plume coming from the direction of the River Fire on the evening of Aug. 3 - A.F. Baumann

MENDOCINO Co., 8/3/18 — The Ranch and the River fires have NOT merged. The Mendocino Voice has contacted CalFire’s main public information office in Sacramento and confirmed that the Ranch and River fires have NOT merged, they are still separated by several miles. This does not mean that they cannot merge — it is possible — though firefighters are optimistic about the new dozer lines along the north end of the River Fire, and have been backfiring in that area.

Backfiring operations were continuing as of sundown, and a reporter from the Mendocino Voice traveled part way up the road into the Cow Mountain Area, and saw only a small smoke plume to the southeast. There was no evidence of the fires merging, in fact fire activity appeared to have died down quiet significantly as of about sunset.

What’s more, and we cannot stress this enough, a CalFire spokesperson in Sacramento has stated that the fires have not merged, and remain separate — and added that they have contacted the people responsible for spreading this rumor and asked them to remove the tweet which seems to have started it.

CalFire has called out the false information on twitter, and asked that the tweet be taken down.

In addition, Tricia Austin, CalFire Mendocino Unit’s public information officer, has confirmed that the fire is not active in that vicinity after driving from a meeting in Stonyford back to Ukiah, and arriving just before midnight. “I was at the intersection of Scotts Valley Rd. and Highway 20, and there was no active fire visible, except a glow from the hillsides behind Blue Lakes, south of Blue Lakes, where you would expect to see parts of the River Fire, and even that was not significant — I expected to see more.”

As Austin drove around past the roundabout near Upper Lake and through Blue Lakes, into Mendocino County, she said she, “saw no signs that there was any active fire to near Highway 20 — literally no active fire visible to the north.” She emphasized that while it is still possible the fires could merge, they have not as of midnight tonight.

The false rumor was further spread by a TV station based in Sacramento. KCRA apparently decided to repeat information from this an unverified tweet on their website, and from their the rumor took off like — well — wildfire.

Here are some screenshots of that article: 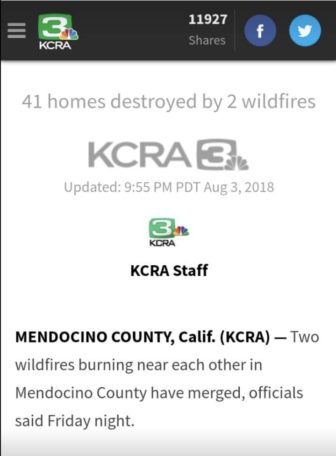 A screenshot of the incorrect article from KCRA, a TV station located in Sacramento. 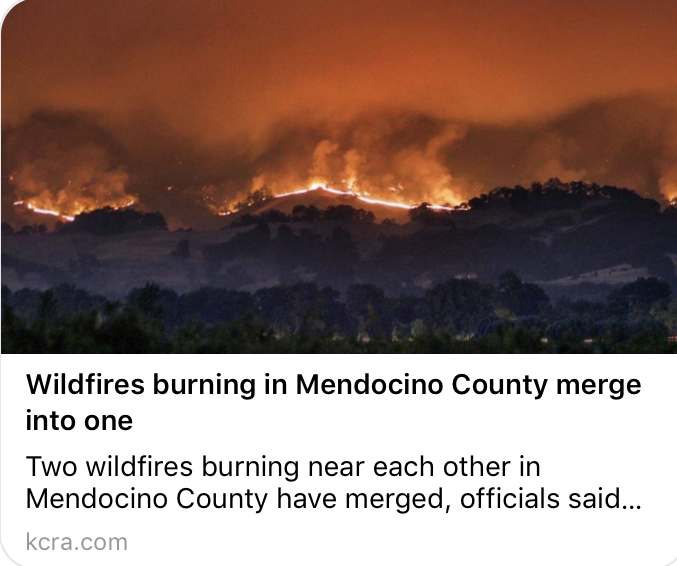 A screenshot of the incorrect article from KCRA, a TV station located in Sacramento.

KCRA, for their part, has not run a correction, they simply changed their story to say that there are “conflicting reports,” and appear to have deleted their original tweet. Most news services adhere to a standard where such a mistake would require the printing of a correction, which KCRA does not appear to have done.

They additionally broadcast a misleading graphic, which showed the fires connected. Though the on-air personality states that they “don’t know,” if the fires have merged, they nonetheless left the graphic on the screen for several seconds. 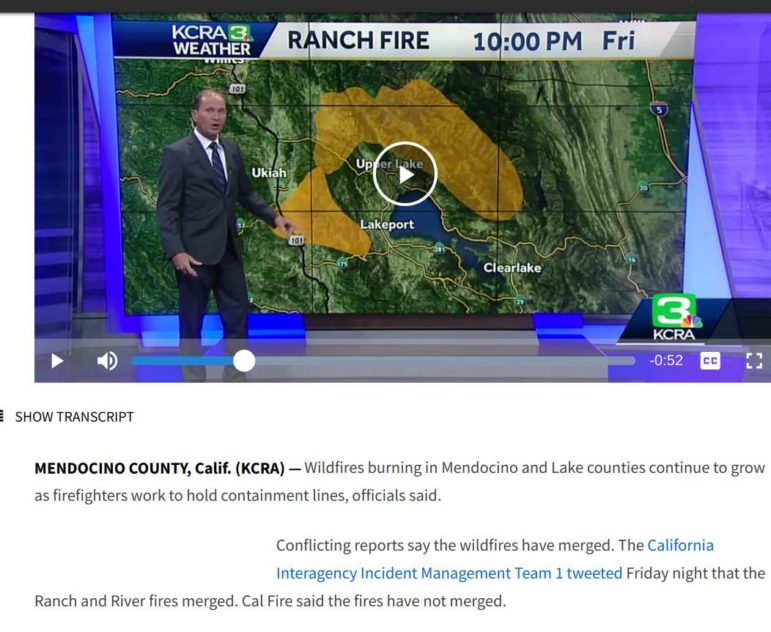 A screenshot of KCRA’s website showing the misleading graphic of the Mendocino Complex fires.

The United States Forest Services’s (USFS) InciWeb website does not show the fires merged, and still a couple miles apart. 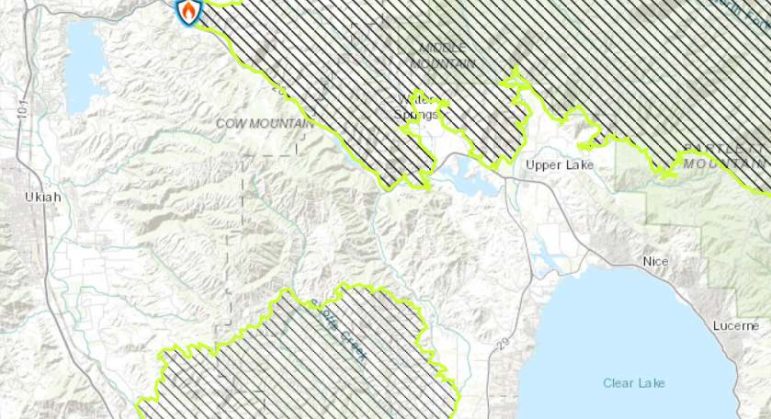 Aug. 3 map of the Mendocino Complex, from InciWeb

7 thoughts on “Ranch and River fires, of the Mendocino Complex, have NOT merged — the fires remain separate”