Containment on the Eel Fire reached 100% today, according to this evening’s update from the United States Forest Service. The fire has not grown in size for more than five days, and all road closures and evacuation orders have been lifted.

Fire crews will remain in the area making sure that the containment lines hold, and ensuring that “embers from smoldering vegetation do not spread outside the containment line.” There are 70 people continuing to work on the incident, including three engines, two water tenders, one dozer, and two fire crews.

The USFS does not plan to provide additional informational updates on the Eel Fire after tonight’s announcement. Initial reports indicated that the fire may have begun at a structure and then spread into vegetation; however, the cause remains under official investigation as of the time of publication.

Containment on the Eel Fire reached 70% as of Monday, August 6. Benefits are available to people who have suffered damages or had to evacuate from the Eel Fire through North Coast Opportunities, which is also providing assistance to evacuees of the Mendocino Complex.

The evacuation advisory for the Eel Fire outside Covelo has been lifted, according to the USFS, as containment on the fire has continued and the fire has not grown in several days from its size of 972 acres. The mandatory evacuation was downgraded to an advisory on Friday, and after firefighters made progress over the weekend on containment, officials have determined that the area is now safe for the public. Road closures in the area have also been lifted.

Residents are advised that firefighting efforts are ongoing, including mopping up, increasing containment, and dealing with dead trees that could pose a threat to fire fighters. Firefighters and other emergency response vehicles will continue to work near the Eel Fire, and 144 people are currently assigned to the incident, although that number will increase over the next couple days. Residents are asked to remain alert in the area to allow safe conditions for the fire fighters.

The United States Forest Service office for the Mendocino National Forest, in Willows, put out a press release this evening updating the conditions on the Eel fire, east of Covelo As of this evening the Eel Fire stands at 972 acres with 60% containment. The 144 personnel on the fire are described as mopping up, and being aided by lower temperatures and calmer winds.

Here is the release:

There are 144 personnel assigned to the incident to patrol, extinguish smoldering vegetation near containment lines (commonly referred to as mopping up) and to fell snags that pose a threat to firefighters working on the fireline. This incident is aided by personnel from the US Forest Service, Fish and Wildlife Service, Bureau of Indian Affairs, California Department of Forestry and Fire Protection, Arizona and the private sector. Incident Commander Dale Shippelhoute said, “The interagency cooperation on this incident showed how individual agencies come together and work effectively to meet one set of objectives on incidents no matter the location or jurisdiction.”

On Sunday, minimal fire behavior was observed with mostly smoldering and creeping. A warming trend will return with no precipitation in the forecast.

Mandatory evacuations were lifted for the North M1 Road from the Eel River Station to the Indian Dick Station. An evacuation advisory remained in place for this area.

Containment on the Eel Fire has reached 50%, according to this evening’s update. The incident update from USFS also notes that “firefighters completed the line around the perimeter of the fire today,” although spotting from snags is an ongoing challenge.

Fire fighters are “continue to reinforce firelines and mop up.”

MENDOCINO Co., 8/4/18 — A new map is available for the Eel Fire, from the United States Forest Service showing the containment lines that have been established as of Saturday, August 4 (see below). The evening update released on August 3 put containment at 40%, and 175 personnel are assigned to the incident. The size of the fire has not been updated by USFS from close to 1000 acres in several days.

The USFS incident page also shows a “red flag” warning in effect of the Eel Fire area until about 11 p.m. Saturday, which means that high temperatures and potential high wind speeds could make fire fighting efforts more difficult. The fire fighters are working in the Mendocino National Forest in what is often steep terrain, and the remnants of dead trees from the North Pass Fire in 2012 are creating additional challenges.

Saturday, firefighters will continue to reinforce and cool the fireline with helicopter water drops, hoses extended from engines, and shovel work. When firefighters need to hike into areas that are difficult to access, they will carry their own water with them in 40-pound water carriers called “bladder bags”.

For safety reasons, tree fallers will be taking down “snags,” or dead trees, especially on the north end of the fire. A portion of the Eel Fire is in the fire scar of the 2012 North Pass Fire. “Snags from the North Pass Fire make it more challenging for firefighters to mop up and cool hot spots,” said Incident Commander Dale Shippelhoute.

A half-acre fire that escaped containment lines Friday was stopped and lined. The Eel Fire is 40 percent contained and 972 acres. There are 175 personnel assigned to the incident.

Mandatory evacuations were also downgraded to evacuation warnings at about 6 p.m. on August 3 by the Mendocino County Sheriff’s Office. However, residents are advised to remain vigilant, as conditions could change quickly, especially when traveling on FH7. Residents are also asked to avoid the area unless necessary and to remain alert for first responders in the area, since the fire fighting efforts are ongoing.

An updated report should be available around 6 p.m. and we will update this article when more information comes in.

Here’s our coverage from the first day of the Eel Fire and subsequent updates. 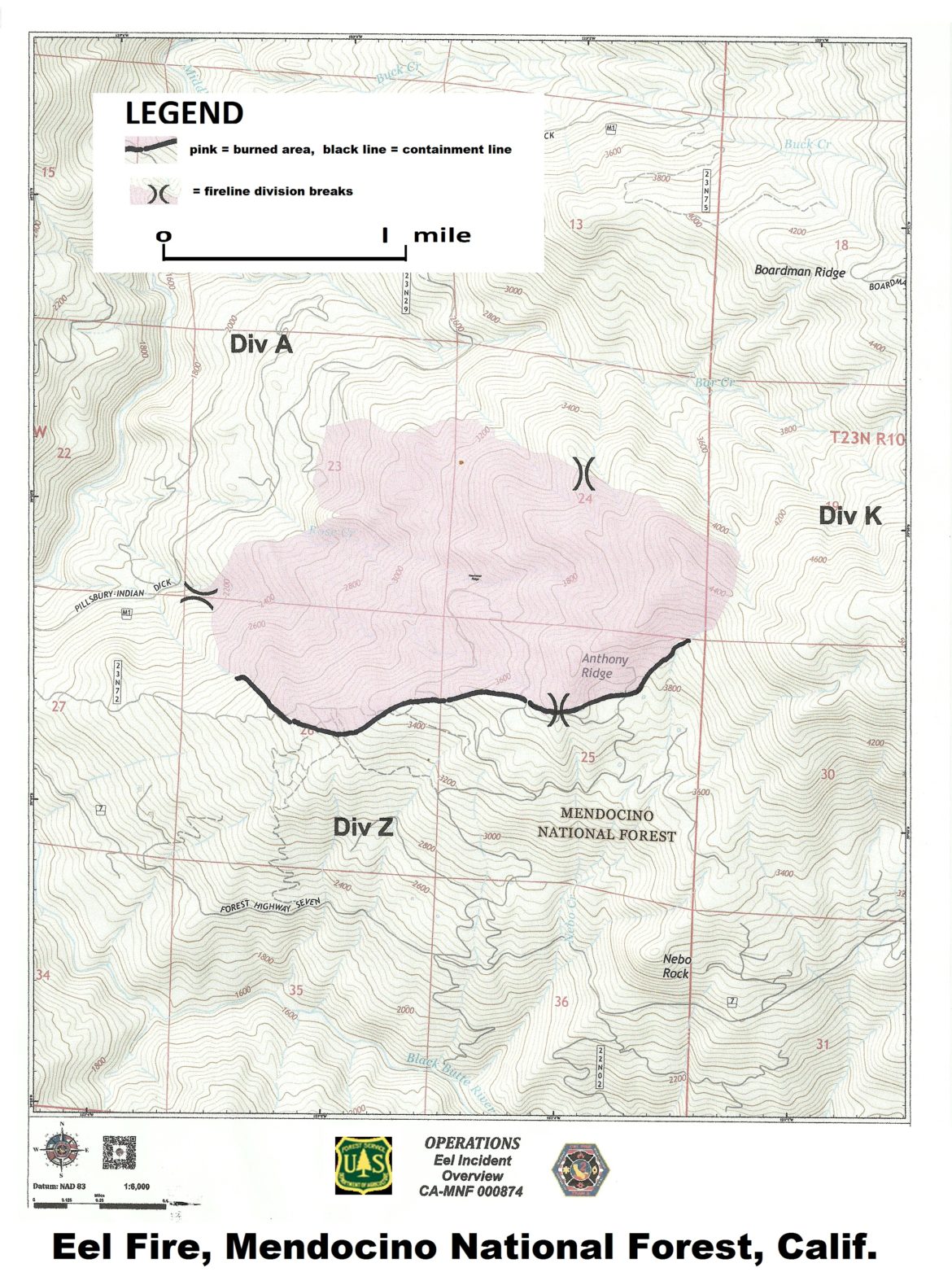