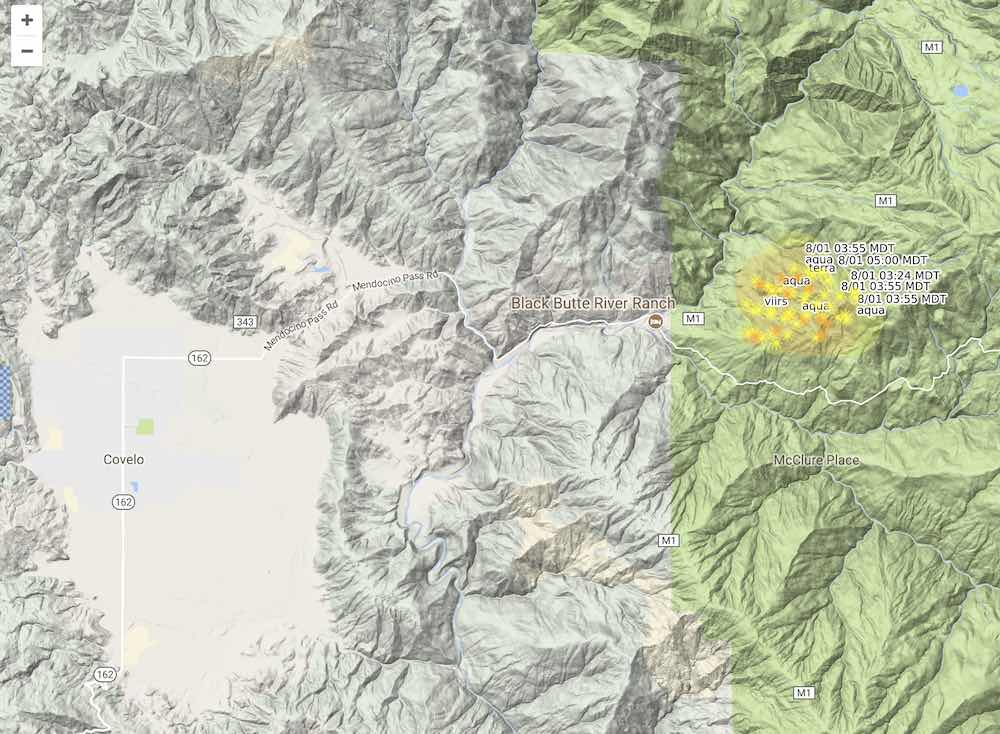 Eel Fire containment is now 40% and the fire is still about 1000 acres in size, according to this evening’s update. Mandatory evacuations were also lifted from along the M1 North Road from Eel River Station to Indian Dick Station at 6 p.m. More than 100 personnel are continuing to work on the Eel Fire to ensure containment increases.

Update 8/3/18 6:25 p.m —The mandatory evacuation order has now been downgraded to an evacuation advisory by the Mendocino County Sheriff’s Office as of about 6 p.m. this evening. The MCSO asks people to remember to stay vigilant about the current conditions, and to pay attention to evacuation notices and road closures (as well as sign up for emergency alerts. The firefighting efforts are ongoing, and so the area may continue to be smoky. Residents are asked to continue to drive carefully and yield to emergency vehicles as they continue fighting against the fire.

Update 8/3/18 4:45 p.m — Firefighters have made good progress on the Eel Fire today, said USFS’s Punky Moore, and the size of the fire has not changed. Crews have been  constructing containment lines around the fire’s perimeter and making headway against the blaze. Moore said that the conditions on the fire remain difficult, in part because the fire is primarily burning in an area with lots of snags and dead trees from a previous fire in 2012, but that today’s efforts against the blaze seemed successful.

The USFS updates their fact sheets for the incident on their fire map each night around 6 p.m. to show the day’s progress. More specific information about any changes in acreage and containment, as well as what resources are on the fire, should be available early this evening. Moore said she did not expect any significant change for the Eel Fire in tonight’s update.

Update 8/2/18 7:45 p.m — The Eel Fire is now 25% contained and has not increased in acreage, according to the USFS evening update. Resources assigned to the incident include two crews, 20 engines, one dozer, and five water tenders. The update notes:

“No additional critical resources are needed according to Incident Commander Dale Shippelhoute.”

Potential north winds in the forecast could push the fire towards Forest Highway 7 (FH7) and structures along the road. FH7 is open but travelers need to be aware that conditions could change quickly.”

MENDOCINO Co., 8/2/18 2:20 p.m — The Eel Fire did not grow overnight, according to the Mendocino County Sheriff’s Office, though more accurate mapping now puts the fire at about 972 acres. The United States Forest Service has now added the incident to their fire map, and lists the containment at 5%.

Mendocino Pass Road, FH7 remains open, but Punky Moore from USFS warned that any traveler on that road should be aware that conditions could change quickly, and to take caution and remain vigilant if they plan to use FH7. M1, known as Indian Dick Rd., remains closed from the Eel River work station to the Indian Dick work station.

Moore said the fire is currently threatening 40 structures, and three have been damaged or destroyed. Conditions remain hot and dry with some winds, but the prevailing winds on the fire are westerly, meaning the fire is moving to the east and somewhat to the north, Moore said. There are six engines on the scene, and the air attack continues today.

“We are continuing full suppression efforts,” Moore explained, “and we are doing everything we can.” Moore said requests have been put in for additional resources, such type 1 crews and engines, and responders are waiting to see if and when those resources may be available for the Eel Fire. “Theres a lot of fire activity right now [statewide] and you don’t always get what you ask for, but we continue to work until we do,” Moore added.

A shelter has been established at Round Valley Elementary School, at the corner of Howard Street and Airport Road in Covelo, which is being staffed by Health and Human Services. There will be cots, blankets, and food available for evacuees. For more information, call the Fire Call Center at 707.467.6428.

Around 103 people have been evacuated as of the time of publication. There is no current information about when the mandatory evacuation orders may change; that decision is ultimately made by the Mendocino County Sheriff’s Office.

We will continue to update as more information becomes available. You can also read our previous coverage of the first two days of the Eel Fire.