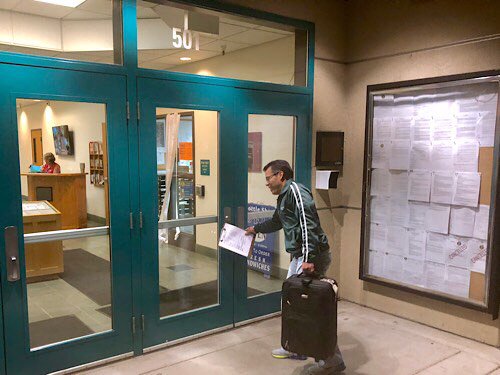 All precincts are now reporting, and those numbers have been added to the absentee ballots that had already arrived yesterday. However, the count is not over. Absentee ballots will continue to trickle in over the next few days, and legally have until Friday to arrive, meaning the official count likely won’t be done till next week.

That said, while it is possible that the remaining absentee ballots could change the outcome of certain races, it is fairly unlikely. As of this morning there have been 19,049 votes counted (40.35%, of the 47,214 registered voters in Mendocino County), and 100% of precincts are reporting. So with those caveats we can say that it looks like John Pinches and John Haschak will be going on to the general eletion in the Third District, and Ted Williams and Chris Skyhawk will be going on to the general in the Fifth District.

Measure G, which would have raised the transient occupancy tax to include some campsites and RV sites, has most likely lost. Measure C carried 63% of the vote but need a super-majority of 66.6% to pass, so it’s still too close to call. Measure D made the two thirds super majority, but by a slim margin, and so is also too close to call. Measure E won in a blow-out with 90% of the vote. Measure F holds at 60% and needs a super-majority, meaning it almost certainly lost.

In the race for assessor-clerk-record, Katrina Bartolomie currently has a commanding lead having captured more than 60% of the vote. In the county level primaries winning 50% of the vote in the primary means that no general election will be held for that office. With a 60% vote this almost certainly means that Bartolomie has won. But again, the counts are not final, and absentees continue to trickle in.*

In the race for Superintendent Michelle Hutchins has one 53% of the vote. If that lead holds it will obviate the need for a general election for superintendent. It is unlikely that this will flip, but it is still not official.*

The counting continued through the night albeit much more slowly in Mendocino. At 2:30 a.m. the Los Angeles Times was reporting that 88% of precincts statewide were reporting results, while at that same hour the number in Mendocino remained stalled at 6.8%. The final update to the county’s elections website was made at 3:25 a.m., and the registrar technically has 30 days after the election to finish the count, though it will most likely be made official next week, once all the absentee ballots have arrived.

District 3 Supervisorial Race, with all 37 precincts reporting, and 1999 votes counted, amounting to 20.6% of registered voters

Sheriff Tom Allman, District Attorney David Eyster, Auditor-Controller Lloyd Weer and Treasurer Sheri Schapmire all ran uncontested, and they have all won, with only small write in protest votes.

Measure G with 9533 votes counted and all 250 precincts reporting

As for statewide races, local and statewide, Lt. Gov. Newsom is going on to the general with a large lead over Cox, and Senator Feinstein will definitely go on to the the general, where it appears she’ll be challenged by State Senator De Leon.

Congressman Huffman will face-off against Mensing, in what is sure to be a blow-out. Huffman received 70% of yesterday’s vote and Mensing 23%.

*Correction: An earlier version of this article erroneously stated that the top two vote getters would proceed to a general election in the superintendent and assessor races. While that is the rule at the state level, at the county level if a candidate gets 50% of the vote plus 1 in the primary, there is no need for a general election, and the candidate wins. This is likely the case in the assessor race, the superintendent race and in the races where an incumbent ran uncontested.

A poll worker delivers a suit case full of ballots to the county offices. — A.F. Baumann

UPDATE 6/6/1812:42 a.m. — The ballots from Point Arena and Gualala just arrived at the county offices in Ukiah, after at least a three hour drive. This means that all ballots from the precincts across the county have arrived in Ukiah, except for the wandering ballots of Comptche — which took a detour to the coast. Two poll workers have been sent from Ukiah to retrieve the ballots from Comptche, which were mistakenly placed in the trunk of a poll worker’s car earlier, and taken to Little River, rather than Ukiah.

SCROLL DOWN for more on that, as well as the current count below. Assessor Ranochak says that we should expect another big update in the county presently. 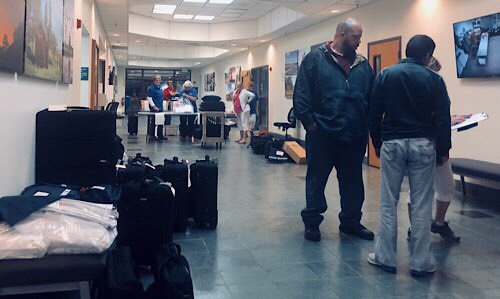 Poll workers process and unpack the ballots as they are delivered from precincts across the county, at the county offices. — A.F. Baumann

UPDATE 12:11 a.m. — The ballots have been tracked down and the poll worker will bring them to the Comptche Store, where she’ll meet two other workers currently driving over from Ukiah, to hand off the ballots, so that they can finally make the journey to Ukiah, after a brief detour. Assessor-Clerk Ranochak has stated that the two extra hours of driving won’t significantly delay the count, given how late the rest of the votes will be counted.

Ranochak added that these things happen occasionally, though the last time she could recall such an instance of misplaced ballots was about ten years ago.

It just wouldn’t be a Mendocino election without an extra late night drive down a windy road.

UPDATE 6/6/18, 12:03 a.m. — It’s midnight on election night and somewhere in Mendocino County, in the trunk of a poll worker’s car, the ballots of the citizens of Comptche have gone down a little detour, ensuring a several hour delay in the final vote tally.

The ballot counting continues slowly at the Mendocino County Assessor-Clerk-Registrar’s office in Ukiah, and as of midnight only 4.4% of precincts are reporting — and a poll worker has mistakenly taken kept of box of ballots, driving them, presumably, to Little River.

The details are murky, and county staff is currently working on trying to figure out the situation, but it appears that a poll worker placed some amount of ballots collected in Comptche in the trunk of her car, and then proceeded to drive to Little River, instead of Ukiah. This woman does not seem to have a cellphone, and county staff are scrambling to figure out a way to find the woman, and send poll workers on the three hour round-trip drive from Ukiah to Little River.

Tonight’s count cannot be finished until all the votes cast in person today have been counted. Given this latest snafu that may not be till early tomorrow. 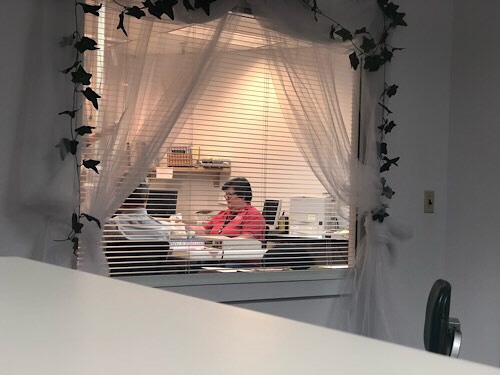 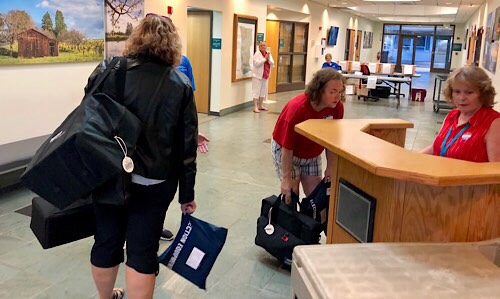 District 3 Supervisorial Race, with 0 precincts reporting, and only 1113 votes counted:

None of the precincts now reporting appear to be in the Third District, and this vote count has not changed since the absentee ballots were counted.

Sheriff Tom Allman, District Attorney David Eyster, Auditor-Controller Lloyd Weer and Treasurer Sheri Schapmire all ran uncontested, and they have all won, with only small write in protest votes.

As for statewide races, local and statewide, Lt. Gov. Newsom is going on to the general as will Senator Feinstein will definitely go on to the the general, but it’s neck and neck for the second slot in the the senatorial race. 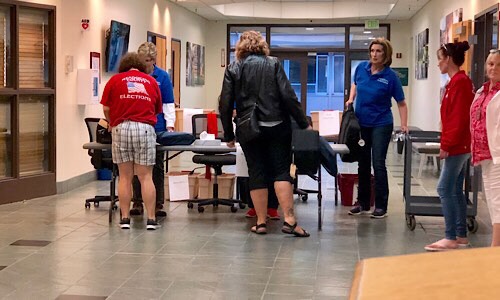 MENDOCINO Co., 6/5/18, 8:22 p.m. — The polls have closed across California, and we are expecting the first results for local elections to be released around 8:30 p.m. However, these should be taken with a grain of salt, given that they only include the count of absentee voters whose ballots have already arrived at the county offices by mail. The demographic of people who get their absentee ballots in that early does not closely match the demographics of the county at large.

Results from the precincts will begin to arrive by 9 p.m., in large boxes, and will be counted by the three counters the registrars office has on staff. An additional eight extra workers are at the county offices helping with processing the ballots and breaking down the equipment, but not with counting.

All same day polling votes will be counted by the end of the night, but the absentee ballots may not be counted for a couple weeks. So even if you walked your absentee ballot into a polling place, it will not be counted until later. Given that there are eight candidates in the District 3 supervisorial race and five in the District 5 race, the margins of this election as expected to be quite narrow, meaning we may not know the outcome of these races for a few weeks. The registrar technically has 30 days from the day of the election to finish the count.

Stick with The Mendo Voice, we’ll be updating the count as the night progresses. 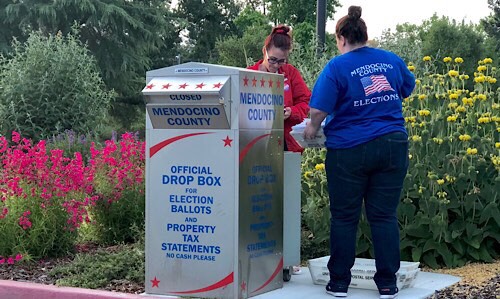 2 thoughts on “All precincts now reporting — Pinches and Haschak, Williams and Skyhawk in the lead”