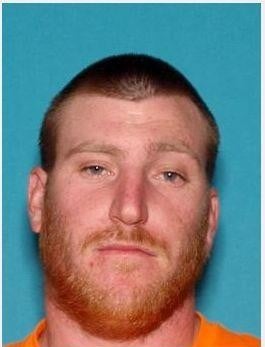 MENDOCINO Co., 2/5/18 — Andrew Crowningshield, 27, the suspect in the killing of Autumn Smith, 22 of Fort Bragg, has been apprehended in Glenn County, after a roughly one day long manhunt during which he fled Mendocino County. Crowningshield was booked on charges of murder and attempted murder.

The victim, who also went by Autumn Johnson, had previously been in a relationship with Crowningshield, and they had a three year old son together, however they had broken up over a year prior to yesterday’s incident. They shared custody of the boy. A Go Fund Me has been created to help the victim’s family, and to pay for her funeral expenses.

According to a press release issued by the Mendocino County Sheriff’s Office (MCSO), Smith was traveling down Highway 1 near Caspar, with Daniel Alonso, 35 of Fort Bragg, when they passed Crowningshield in his truck. Crowningshield followed Smith’s car and eventually Smith pulled over to speak with him. As she approached his truck Crowningshield allegedly opened fire on Smith, striking and killing her. Alonso, believing that Crowningshield was also firing on him, then fled in Smith’s car and called the police.

Crowningshield then allegedly fled the scene, and eventually the county, only to be found this morning in Glenn County, and arrested by Glenn County Sheriff’s deputies.

Here is the Go Fund Me:

And here is the press release issued by the MCSO:

Synopsis: On 02/04/2018 around 9:10 AM the Mendocino County Sheriff’s Office responded to a report of a shooting in the 6000 block of North Highway 1 in Little River, CA.  The reporting party, Victim Daniel Alonso reported that he and his friend, Victim Autumn Smith (AKA Johnson), were traveling southbound on North Highway 1 from Fort Bragg.  As they passed the area of Caspar they observed Suspect Andrew Crowningshield in his vehicle.  According to Alonso, Crowningshield followed their vehicle as they drove south.  Crowningshield and Smith had a previous relationship together and they share a child in common, a three year old boy.  Their relationship had ended over a year prior to this incident and they shared custody of the child.

Initially MCSO Deputies were concerned the 3 year old boy might have been taken by Crowningshield but it was later learned to not be the case.  Deputies later found the child safe, with relatives, and learned he was not at the scene nor was he involved in the incident in any way.

Responding Deputies and members of the Albion Litter River Fire Department arrived on scene and found Smith deceased at the scene.  MCSO Detectives were called to conduct the investigation while Deputies, Officers from the California Highway Patrol (patrol and helicopter), Officers from the Ukiah Police Department, and Officers from the California Department of Fish and Wildlife combed the area looking for the suspect.  Several reports came in the suspect may have been seen on the Comptche-Ukiah Road but Deputies were unable to locate him.  Additional reports came in the suspect vehicle might have been seen on the Eel River Road leading to Lake Pillsbury.  A be on the lookout (BOLO) was issued to all allied agencies to stop and arrest the suspect.

On 2/5/2018 just before 7:00 AM the suspect vehicle was spotted in Glenn County in the Town of Elk Creek.  Responding Glenn County Deputies observed Crowningshield near the vehicle and placed him into custody without incident.  Crowningshield will be transported and booked into the Mendocino County Jail on an open charge of homicide and an open charge of attempted homicide.  This is a no bail status.

The Mendocino County Sheriff’s Office would like to thank all allied agencies who assisted and all citizens who called in information about possible sightings.