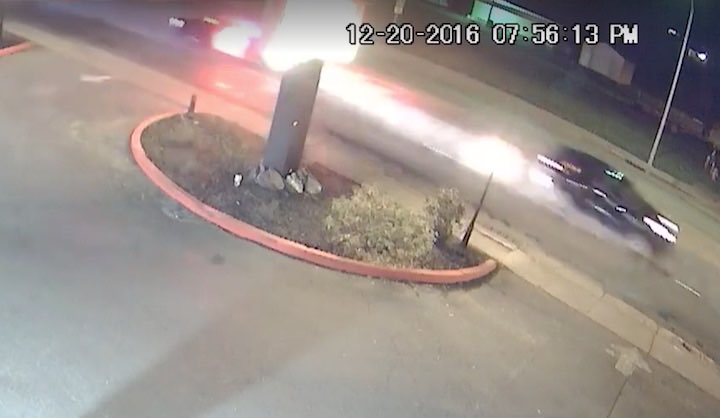 A screenshot from security camera footage of the chase. The suspect's vehicle is giving off sparks because its tires were punctured by the spike strip. 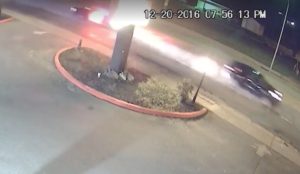 A screenshot from security camera footage of the chase. The suspect’s vehicle is giving off sparks because its tires were punctured by the spike strip.

Here is some new information from the MCSO.

MENDOCINO Co. 12/21/16 — The California Highway Patrol has released the arrest report detailing the events of last night’s 24 mile long high speed chase. The chase, which began on Talmadge Rd. in Ukiah, involved multiple law enforcement agencies, spike strips, K9 units, and speeds of over 100 miles per hour. At open point, in Willits, the suspect fire his gun out of the driver’s side window, at police.

No law enforcement officers or bystanders were struck, and police — exercising caution and restrain — did not return fire.

The suspect, 27 year old Ryan Joseph Mazstadt of San Jose, was eventually taken into custody and is now being held at the Mendocino County Jail though he has not been entered in the booking logs.

According to the report Mazstadt is being charged with attempted murder and assault with a deadly weapon (presumably for firing his gun out the window), as well as felony reckless evading, a violation of the California Vehicle Code.

According to the report the incident began at around 7:00pm when officers of the Ukiah Police Department spotted a Kia sedan which was connected to a string of burglaries. The officers attempted a traffic stop, at which point the suspect fled, getting on Hwy. 101 from Talmadge Rd. and heading north on the 101 at speeds of over 100mph.

The UPD asked that the CHP take over, and officers of the CHP pursued the suspect all the way up the grade. At the south off-ramp to Willits the suspected existed the 101, but the Willits Police Department was prepared, and had deployed a spike strip across the road, at Walker Rd.

With the his tires blown, and with smoke and sparks flying from his wheels (as can be seen in the video below) the suspect continue driving into the town of Willits. Just north of Holly St. he allegedly stuck his gun out the driver’s side window and fired multiple rounds at police. No one and no vehicles were hit.

Soon thereafter he bailed from his car and fled on foot. Scanner traffic indicates that this happened somewhere around the Safeway. He fled into a wooded area near a creek, perhaps hiding down in the creek. But a K9 unit from the Mendocino County Sheriff’s Office was on scene, and with the help of the dog, the suspect was quickly found and apprehended.

Here is our coverage of the story as it happened last night.

And here is a video of a portion of the chase, captured by the security cameras at The Old West Inn, in Willits, courtesy of Roshan Patel. Skip to about minute 2:10 to see the chase:

Here’s info from the official press release from the CHP

On 12/20/2016, at approximately 1935 hours, the Ukiah Police Department (UPD) observed a Kia sedan that was connected with multiple local burglaries. UPD initiated a traffic enforcement stop and the vehicle failed to yield resulting in a pursuit. The vehicle quickly entered US-101 northbound from Talmage Rd. Upon Request from UPD, CHP officers took over the pursuit. The suspect continued northbound on US101 towards Willits. The pursuit reached speeds of over 100mph. The suspected vehicle exited US-01 onto SR20 near Willits, Willits Police Department was prepared and successfully deployed the spike strip at SR20 and Watker Road, flattening the Vehicles fires. The pursuit continued northbound towards SR20 and Holly Street, Just north of Holy Street the suspect pointed a handgun out of the driverside window and fired multiple rounds at the pursuing officers (no Officers or Patrol Vehicles were hit). The suspect continued northbound for a short distance and eventually exited the vehicle and ran into a nearby creek. Ukiah CHP, Willits Police Department, Mendocino County Sheriff’s Department performed a search for the suspect in the wooded area. With the assistance of the MCSOK9 Unit, it didn’t take long for the K9 to locate the suspect. The suspect was arrested and identified as Ryan Joseph Mazstadt, Mazstadt, who is a San Jose resident, was booked into the Mendocino county jail.