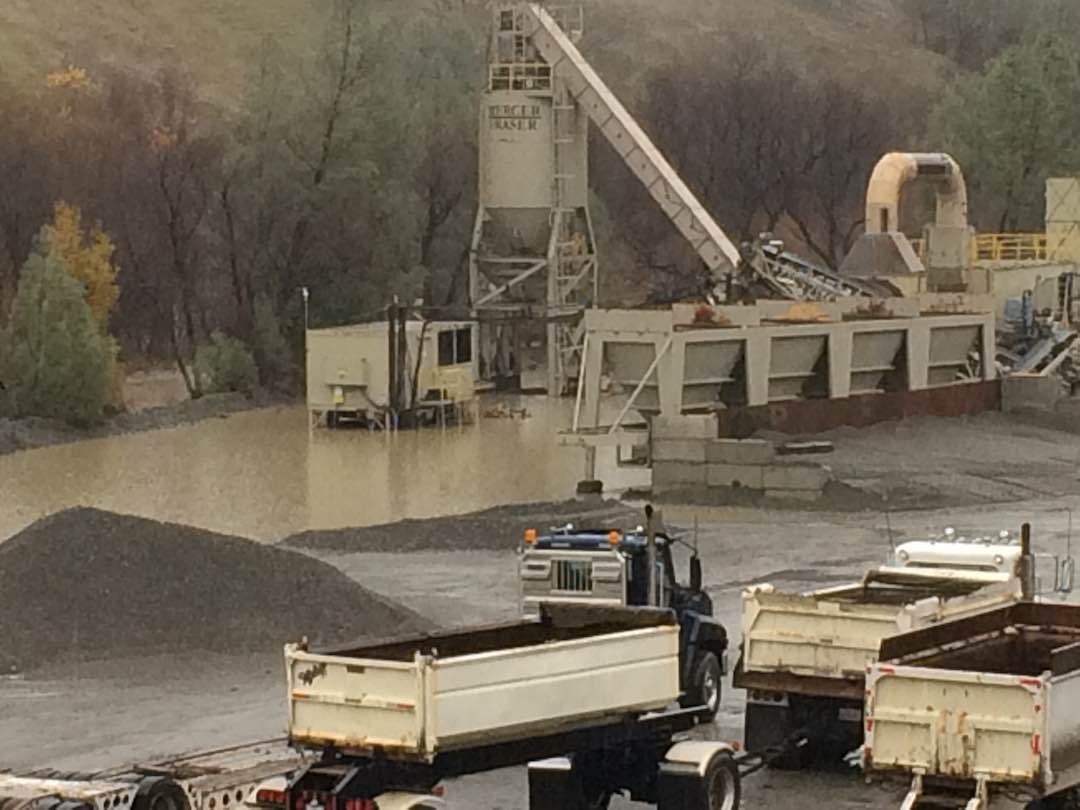 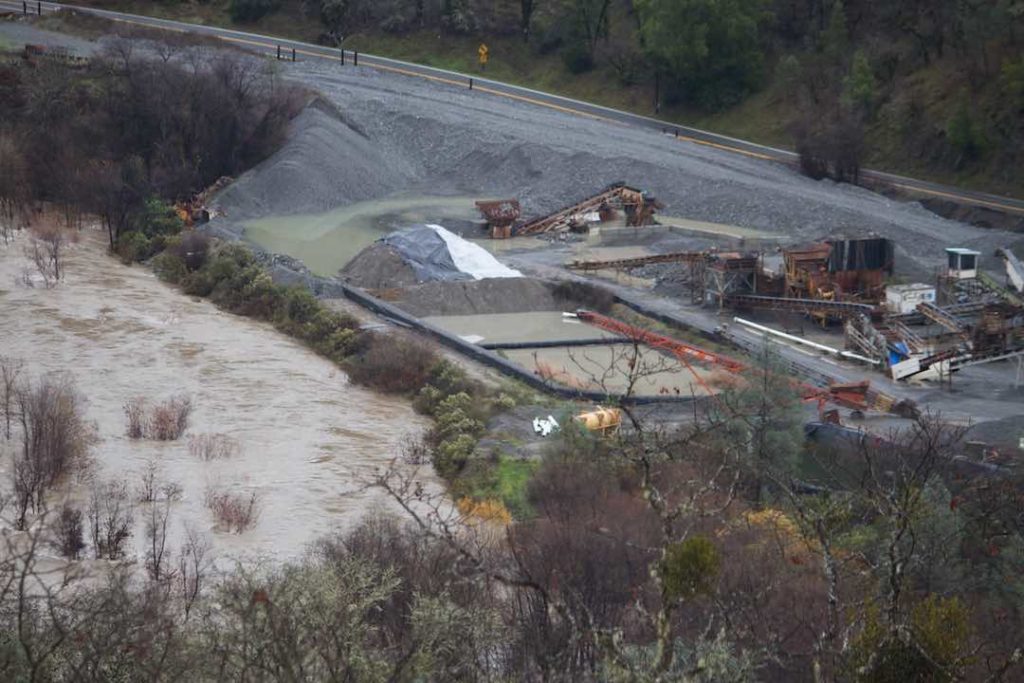 MENDOCINO Co. 12/21/16 — According to neighbors of the Grist Creek asphalt plant, the recent heavy rains have resulted in contaminated runoff flowing into the Eel River. Neighbors have circulated photographs that appear to show parts of the plant submerged under water. The plant, which is currently closed, sits adjacent to the main channel of the Eel River along Highway 162.

A reporter for The Mendocino Voice drove to the plant on Dec. 16, though the view of the plant is somewhat obstructed from the road. However, pools of water remaining on the the site were visible. When contacted for comment Paul Keiran, the waterboard inspector for the area, responded by saying that he planned to visit the plant in January, and requesting information about possible flooding.

Lyn Talkovsky, who lives near the plant, wrote in an email, “We’re very concerned about the impact of industrial operations site on the health of the creek. We’re concerned about flooding of the site, run off of silt and toxins and also toxins used and spilled on site leaching into the creek. There are salmon spawning site almost adjacent to the site.”

The Grist Creek asphalt plant received a number of air quality violations during its few months of operation in the fall of 2015, and prompted several lawsuits from community groups requesting a full environmental impact assessment of the plant’s operations even prior to starting. During these short months the Mendocino County Air Quality Management District fined Grist Creek more than $170,000. Also, the plant was inspected by the California Air Resources Board, which resulted in a highly critical report. The county air quality district subsequently deemed the plant a “public nuisance.” The district filed a lawsuit in April and the plant has been shuttered until negotiations are settled. However, Grist Creek Aggregates, located at the same site, is currently still allowed to operate. 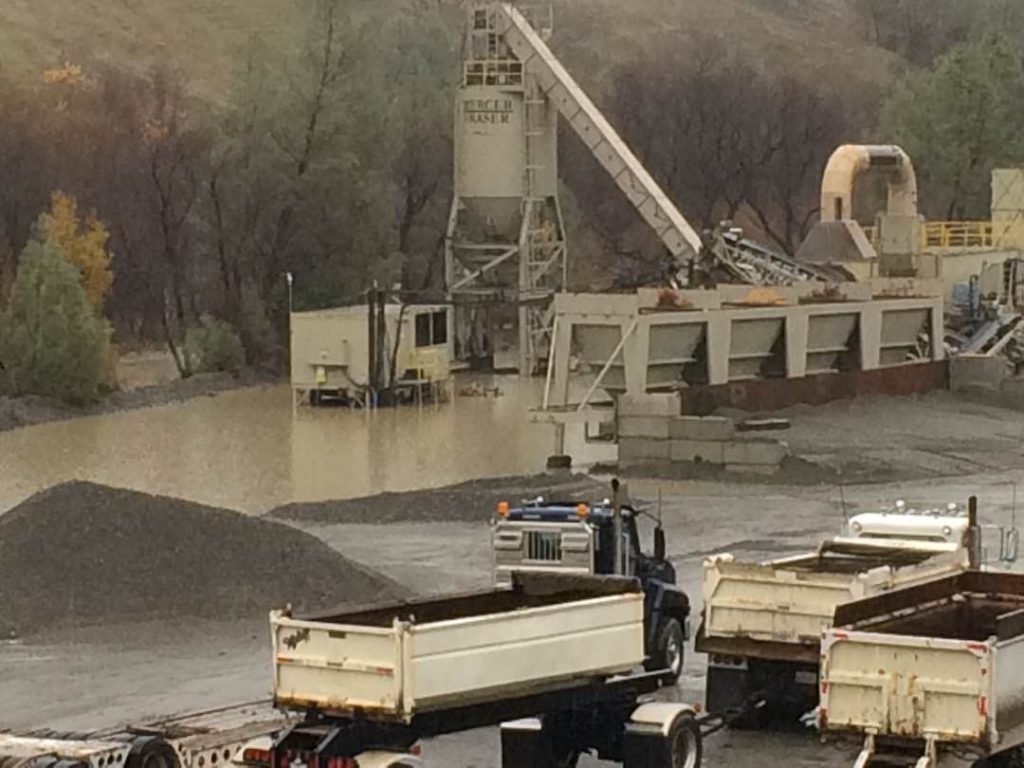 During a mid-day visit on Dec. 16, 2016, a reporter from The Mendocino Voice saw piles of rock aggregates without covering on both sides of Highway 162, as well as pools of water around the aggregate sorting and asphalt mixing equipment. During that time, one pickup truck pulled into the facility and could be seen driving around the grounds, and another pickup was parked outside the plant’s offices. Although the rain had stopped, overflow culverts were still gushing water into a stream which flows into Outlet Creek. From the public roadway it was not possible to see whether water was flowing directly from the plant into Outlet Creek.

The North Coast Regional Water Quality Control Board is the agency responsible for assessing and declaring whether the plant is in compliance with water quality standards. In 2015 Keiran, the regional waterboard inspector responsible for the plant, explained the situation as it then stood. According to him Grist Creek’s operators had made the requested improvements to protect the adjacent waterways, and had applied for an industrial stormwater permit prior to opening.

Improvements included moving equipment to sites above the legally defined 100-year floodplain, and installing a stormwater-berm between a retention pond and the main channel of the stream.

Numerous posts on Facebook indicated that neighbors of the plant had been contacting the waterboard with concerns about flooding and runoff. Yet, when contacted on Friday by a reporter about these claims, Keiran responded by saying that he planned to visit the plant in early January and added, “This happens when heavy rains occur, let me know if the creek flooded the plant.” He did not respond to the question of whether he had been contacted by concerned neighbors, when the last inspection of the plant had been made, or what level of rainfall would trigger a new inspection.

The plant was initially issued a conditional “authority to construct” permit to operate for one year, which allowed the owners to make necessary improvements before receiving a permanent permit. However, within several days of beginning operations, multiple neighboring residents filed complaints with the Mendo Air District, and an inspection by the state Air Board found a general lack of good housekeeping among a list of other potential violations, including an unauthorized “crumb rubber batch mixer” operated by an Arizona-based contractor that was never approved or listed in the permit application. Authorities also discovered that the plant was partly owned by Humboldt-based Mercer-Fraser Co., which was not listed on the initial permit application.

Neighbors also filed complaints about operations during unauthorized times, smoke and smells impacting their health, and impacts to the environment and their property values. The community group Friends of Outlet Creek filed several lawsuits, one against Mendocino County.

Air District Executive Officer Robert Scaglione stated on Dec. 16 that the owners of Grist Creek have so far not paid any of the fines and that negotiations over improvements are ongoing. Scaglione confirmed that the plant would not be eligible to re-apply for a “authority to construct” permit until improvements to the site are made “to the satisfaction of the [air quality] district,” but that Grist Creek Aggregates was still operational.

Scaglione said all previous fines will have to be settled and “we’re still trying to bring them into compliance.” Such improvements would include additional abatement equipment and improving the knowledge of the plant’s employees “about what their permit conditions require.” Scaglione said “we’re asking them to do a lot more than we initially would have,” and added that negotiations had been a “back and forth” that included a consultant from Sierra Research who was working with plant owners. He noted “there is quite a bit of litigation” surrounding the facility, and that the public would be notified before any future permit application was approved to “give them a chance to review.”