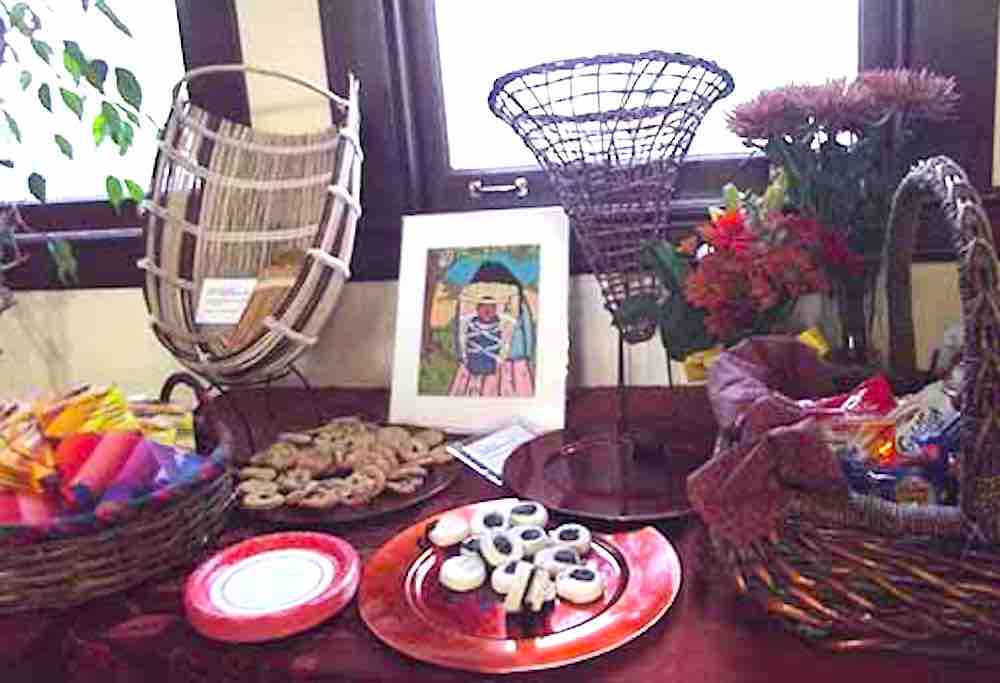 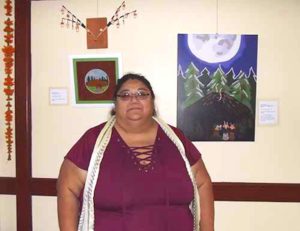 UKIAH — Meyo Marrufo’s artistic endeavors range from the ancient traditions of Native American dance regalia to drawings made with an app on her phone. Each of these mediums, like the 44-year-old Marrufo’s many cultural activities, serves to maintain some aspect of traditional tribal life. Originally of the Eastern Pomo people, she also describes herself as having “the privilege of being family with other tribes,” such as the Hupa, Yurok, Miwok and Maidu. Marrufo is widely regarded as an expert, and beloved as a teacher, in traditional dances and dance regalia, the ceremonial garb that includes intricate beadwork and elaborate designs.

Five or six students and fellow artists sat with her at the opening reception for her one-woman show on November 3, at the Arts Council gallery in the old train depot on 309 East Perkins Street in Ukiah. Students include Patricia Franklin, a member of the non-profit Arts Council board, and her children, who played with their friends outside as the autumn light faded. Susan Billy, a renowned local basket weaver and bead worker who was one of Elsie Allen’s students, also came to enjoy her colleague’s reception. A table underneath the east-facing window featured an arrangement of baskets, pictures, flowers, and shortbread cookies with a dollop of chocolate in the middle for the women to nibble on.

The display, which is scheduled to run through November 30, includes beadwork, a picture made of French knots, and several giclees, or canvases with enlarged images of the drawings Marrufo makes with a sketch app on her Samsung Galaxy 6. She has created several collections of brightly-colored phone app sketches, inspired by everything from meetings with the Environmental Protection Agency (EPA) to memories of festivals and dances. Marrufo, a tribal representative for the EPA, was thinking about pollinators recently when she drew a vibrant series of bees, butterflies, dragonflies, and one bat. “I had to get a night pollinator in there,” she said, with the air of not wanting to leave anyone out of the fun.

Other series include pictures of traditional dancers and snapshots of flora and fauna that she happens to be thinking about on any given day. One picture features a child running away from a goose that she remembers fondly, though the creature menaced her and her friends when they were children.

Every picture has a story behind it, and Marrufo, who travels up and down the state teaching traditional arts and taking part in tribal cultural activities, is prepared to tell them. A sketch of a couple of Tule Elk led to a quick history of the various groups of Tule Elk in Lake and Mendocino counties. As she chatted with the other women and swiped through pictures on her phone, Marrufo told stories about large minnows, dance regalia, and the brilliance of the photographer Dugan Aguilar, whose work on Native American life was recently featured at the Grace Hudson Museum. Marrufo was a moderator at a panel discussion of Aguilar’s work in June of 2016, and was the subject of one of the photographs in the display.

As she conversed about her wide range of interests, two men came into the depot, carrying three small baskets wrapped in white tissue paper. They explained that they thought the work might be Pomo, and asked Marrufo if she could identify them. The baskets had been partially revealed for about two seconds when she identified the work as Filippino.

Marrufo’s work on the traditions of California nations has taken her overseas, as well. In 2014, she spent three weeks in Russia, dancing and visiting cultural sites, like the Russian Jewish Museum in Moscow. “Everything is about having a good time,” she said, and invited her visitors to have some cookies as they perused the artwork on the wall, and on her phone.