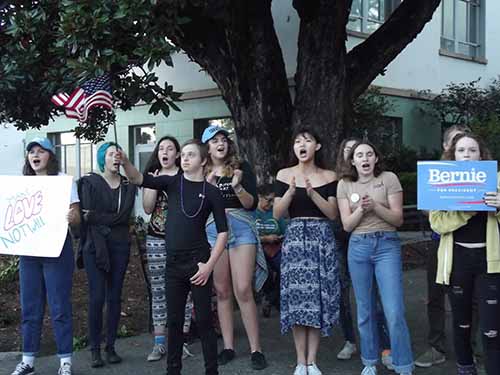 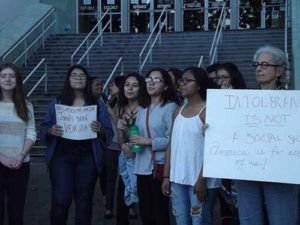 UKIAH — A crowd of about 40 Ukiah High School students, a few faculty, and adult members of the community marched in protest today, Nov. 10, 2016, two days after President-elect Donald Trump’s electoral victory. Though the mood at the march was festive as students gathered after school let out on Thursday afternoon, the young people voiced serious concerns about their future. The group marched from their school on Low Gap Road to the courthouse at 100 North State Street, where they held signs and chanted slogans.

Sixteen-year-old Gracianne Kirsch, who is the president of a peer counseling club and another club called Healthy Minds, set up a Facebook page the day after the election, suggesting the march. “I got a ton of shares from people I wasn’t even friends with,” she said, shortly before the group took off walking fast for the center of town. Asked what why she had organized the march against the President-elect, she said, “Half of our population voted for this homophobic, racist, misogynistic person.” Kirsch’s younger brother Thomas waved an American flag and chewed on an apple. “That’s my sister,” he said proudly, with a broad grin.

Fellow junior Jordan Porterfield added that she was worried about the proliferation of racism, explaining that she thought people would believe that, “It’ll be ok to have his views.”

A third junior, Rosa Delgado, said that in the lead-up to the election, she had “seen a lot of straw man logical fallacies” from Trump supporters, who she said refused to acknowledge their candidate’s racism and misogyny, preferring to vilify immigrants.

One sixteen-year-old student, who arrived from Mexico six months ago, spoke through an interpreter. Asked why he was taking part in the march, he laughed and said, “Do I have to be calm, or can I say what I think?” His main worry, he said, is that Trump is racist against Mexicans. He made his argument by referencing Trump’s trip to Mexico, saying, “when he went to visit Mexico, he was welcomed. Now he comes back to the U.S., wanting to threaten us.” The student added that, “Thanks to Mexicans, the United States has what it has.” He went on to use strong language to the effect that people in Mexico are contemptuous of Trump, because they believe he is only interested in his own personal gain. He said he has family members in Mexico who are afraid of Trump, because they believe that if Mexico refuses to pay for the much-vaunted wall between the two countries, Trump will initiate an armed conflict.

The students arrived at the courthouse and arrayed themselves in front of the steps, displaying signs in Spanish and English, including “Make love not wall!” and “La Gente unida jamás será vencida!” (the people united will never be defeated) Many motorists honked and waved during the first half hour or so, though later Facebook posts reported that one woman yelled, “get a job;” and another driver shouted an obscenity. 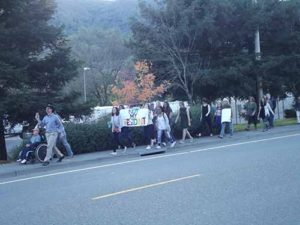 them that the school’s job “is to ensure that students have free speech rights. You’ve got ‘em, as long as they don’t interfere with instruction time, and no violence occurs.” In a conversation on the way to the courthouse, he said that students’ attitudes about the election “mirror the whole society…a lot of people are trying to figure out what it means.” He commended the level of political discourse, saying “the kids are not talking about it the way I hear adults talking about it, and that includes a President-elect. That’s not political. That’s on film.”

Oslund stood aside as the students chanted, “her body, her choice!” and “the people united shall never be divided!” One woman quietly held up a sign that read, “Love Trumps Hate.”

“I can’t yell, or I’ll start crying,” she explained.