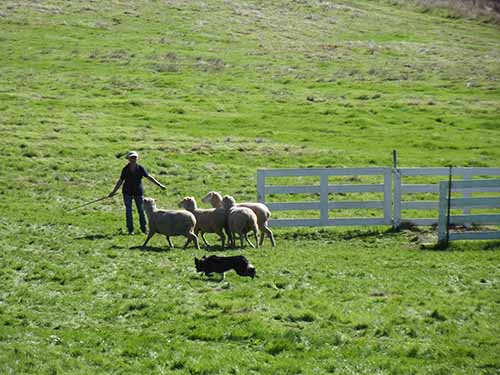 Sheep putting up some resistance at the sheepdog trials this weekend. 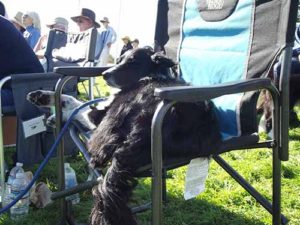 A spectator enjoys the sheepdog trials

HOPLAND — The sheep at the Hopland Research and Extension Center (HREC) are “real sheep,” which is the term dog handler and Modoc County Supervisor Geri Byrne uses to describe a flock that exists for some purpose other than being chased around by dogs.

Although the sheep at HREC serve commercial and research purposes, this weekend they were taken out to a field, four at a time, so sheepdogs and their handlers could put them through their paces. Sheepdog trials are a showcase of canine grace and intelligence, where the most successful teams are those whose human handlers know when to trust the animal’s ability to read the sheep.

This is a qualifying trial, where participants are racking up points to become eligible for competitions. It was the fifth time the United States Border Collie Handlers Association has partnered with HREC to hold the trials on the premises, but some of the sheep still object to the practice.

The trial is an eleven-minute course, during which the dog and handler work together to move four sheep in a straight line, then jog in two loops like a large sideways ampersand, and finally gather into a pen. On the way, the sheep are directed to stroll calmly through three sets of gates. They are supposed to stay together the whole time, except for a few moments during the “shed,” when the dog is expected to separate the sheep and bring them back together, without losing control of any of them. This is the hardest part, because, as commentator and participant Ellen Skillings noted, “Sheep like to be together. Like sheep.”

Sunday’s course was a little abbreviated. One gate had been removed, due to heavy fog and limited visibility in the early morning. But by mid-morning, the 85 spectators were either basking in the bright sun or seeking cover from it in the bleachers as one team after another took on a quartet of commercial sheep. Sunday’s running order listed 49 teams.

The course begins with the silent deployment of the dog from its handler’s post to the waiting group of sheep. “You’ve got more points standing at that post than you will for the rest of the course,” Skillings said. Teams start with 100 points, and steadily lose them as sheep balk, bolt, or ignore the small, energetic predator trying to make them do something besides nibble on grass.

In the first deployment, called an ”outrun,” the dog has to approach the sheep without upsetting them, which sets the tone for the rest of the course and requires perfect confidence. “Allow him to read the stock,” advised Gloria Supernaw, who has been working dogs for 26 years. She went to the finals in Colorado a few years ago, where only 150 teams from the US and Canada competed. “I didn’t win it, but I did good,” she recalled.

After a long, roundabout curve, the dog gets the sheep on the move, in the “lift” and “fetch” portions of the course. At the Hopland course, most of the fetch was a downhill slope, with a gate near the midpoint. Then the sheep came up a gentle rise and moved around behind the handler to begin the “drive” portion of the course, which includes another gate. Ideally, the sheep will trot along calmly, looking as if it were their own idea to take a little moderate exercise on a Sunday morning.

That is not what happened with one quartet, as the sheep and the dog approached the second gate. The sheep, which had been loping along more or less amiably, were suddenly adamant. There was no way they were going to move through the gap between two white sections of a portable fence again that day. “Too late!” one spectator hissed, as the dog moved the small flock into position, then circled around in an attempt to head them off before they could balk again. “Lie down!” another audience member muttered, as the dog milled around, looking busy and confused. The sheep lost patience and tore off across the field, headed for parts unknown.

Some dogs are timid and indecisive, but others can err on the side of too much sternness. Byrne explained that, while “cattle need more persuasion,” any dog that uses its teeth on a sheep will be disqualified. Wool is more easily damaged than cowhide, as is the flesh of the smaller stock animal.

When Skillings took the field with her dog Mead, the crowd went silent. The sheep trotted down the slope and through the first set of gates towards Skillings, who stood at her post with all her points intact. They swirled around her and trotted towards the second set of gates. They slowed, paused, and looked over their shoulders at Mead. The dog moved in a little closer. The sheep considered their options, looking around like they couldn’t remember where they’d put their car keys. Mead crouched down and fixed a pair of unblinking eyes on them. The sheep concluded that going through the gate was not such a bad idea after all, and moved into the shed like they’d been practicing the choreography for weeks.

“This is a pretty run,” one spectator murmured to another. “One of the better runs we’ve seen so far,” her friend agreed.

The sheep reunited at the end of the shed, and headed for the pen. But this time they were serious. One big ewe threw her head back and glared at Mead. Two others looked askance at the open gate of the pen. One, emboldened, took a step toward Mead, and the dog leaped up to meet it. Teeth flashed. A tiny tuft of wool was separated from the hide of a recalcitrant sheep. Skillings and Mead moved off the field. Another dog darted in behind the sheep to usher them off the course.

“I’m sure she’s philosophical,” murmured one of the handlers in the bleachers. Her dog lay on the ground at the end of its leash, panting.