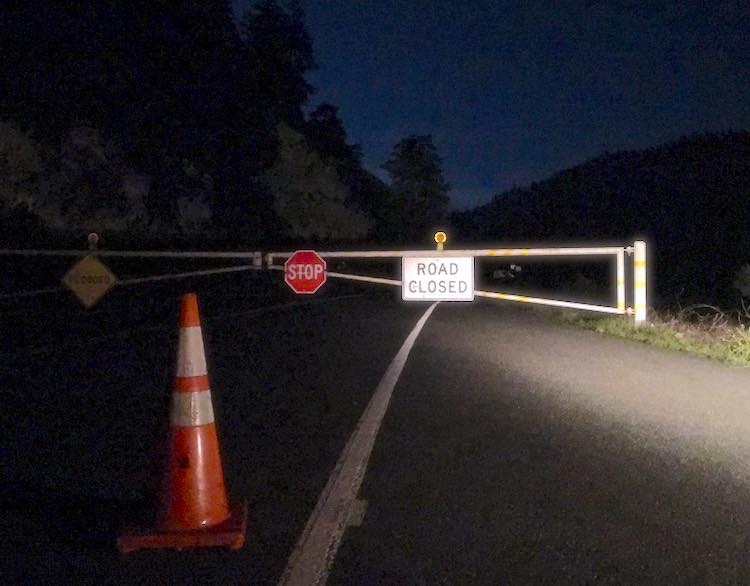 As of 8:45pm, Caltrans has announced that Route 128 is now open. The waters have receded far enough for two way traffic. The flood was originally caused by unusually low king tides due to the supermoon.

UPDATE: 9:50am, 11/15/16: According to Caltrans’ spokesperson Phil Frisbie, “The current flooding on 128 is due to a sand bar damming the river.  The high tide slowed the flow of the Navarro further causing the flooding.  There is nothing we can do about the sand bars, and their frequency of formation and their impact to the highway varies greatly for year to year. One of the upcoming storms will allow the river to breach the sandbar and we will be good for another year or more.” 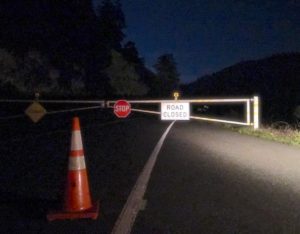 The gate at the 128 was still closed late in the evening November 14.

Highway 128 near Highway 1: Close to noon on Nov 14, a CalTrans public information official said the gates had been closed down in the last hour, and Facebook reports say the road is closed at post mile 0 and post mile 11. He said once the water recedes, crews will remove debris and mud, then re-open the road. The flooding is from the unusually low “king tides” due to the supermoon currently affecting the coast and mouth of the Navarro River.

Highway 128 was also flooded on November 13. A resident near the top of nearby Cameron Road reported that the gates, one near the Navarro bridge and the other just before Comptche Road, had not been closed and there were seven or eight inches of water on the road.

According to CalTrans, there will be a one-way traffic closure on Highway 101 from Comminsky Station Road to north of Frog Woman Rock, due to miscellaneous repairs. Work is expected to continue until December 31, 2016.

There is a one-way traffic closure on Highway 101 at CalFire in Leggett, due to emergency work, expected to be done November 30, 2016.

A motorist driving on Highway 20 just east of Potter Valley at around 10pm November 13 reported 15 minute delays due to pavement repair.