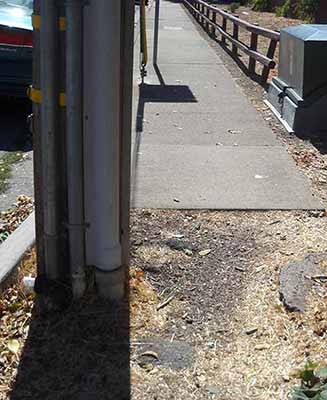 UKIAH —  More than two-thirds of the streets in Ukiah are covered with a black web of broken asphalt. A ride down some sections of Observatory Avenue can feel like a full-body percussion experience. Two measures to address Ukiah’s crumbling streets will come before the voters in November. Measure Y would amend the city code to enact a half-cent sales tax to pay for repairing poor or failed pavement in Ukiah. It would raise the sales tax in Ukiah from 8.125% to 8.625%, effective February 26, 2017.

Council members agreed unanimously to bring the issue before the voters at a May 18 City Council meeting, after hearing a presentation by Director of Public Works and City Engineer Tim Eriksen. Eriksen reported that, according to the Pavement Condition Index (PCI), a 1-100 numerical rating for the state of the pavement, 36.2% of Ukiah’s streets are in poor condition, and 29.6% of them are failed. Only 14.2% of the streets in Ukiah are in fair condition.

He estimated that a budget of $3.6 million a year is what it would take to address deferred maintenance and bring the streets up to a fair condition.

The sales tax, Eriksen told the Council, could be expected to bring in $2.3 million a year. He calculated General Fund allocations at $300,000. He added that the state gas tax revenue available to the city is $335,000, but that most of it goes towards staff, which consists of a seven-member full-time street crew and two full-time engineers. The two sources Eriksen identified add up to about $393,000 that can be used for fixing streets. A San Francisco Chronicle article from earlier this year reported that state gas tax revenues, usually used for funding transportation projects, is falling, due largely to more fuel-efficient cars.

Eriksen also proposed increasing the trench-cutting fee to help pay for street repairs. This would affect property owners who currently pay $45 for encroachment permits when they have work done on their underground sewer systems, in order to do work on the sewage line running from the property into the main line in the street, the asphalt generally needs to be cut open and replaced.

Measure Y would enstate a general tax provision, meaning it only requires a simple majority to become law. Revenues raised by general tax provisions are subject to the City Council’s discretion and may be spent on any municipal purpose. However, Measure Y is accompanied by Measure Z, an advisory tax measure that asks voters if they want the revenue to be used exclusively for street repair. Advisory measures are non-binding, but Ukiah Mayor Steve Scalmanini is confident that the political will exists to use it for that purpose, saying  “there’s nobody that doesn’t want to spend it on streets.”

Ukiah has passed paired ballot measures to fund specific programs in the past. In 2005, voters approved Measure S, which enacted a half-cent sales tax, and the advisory measure T, which directed those revenues towards public safety. These measures were due to sunset in September of 2015, but 76% of Ukiah voters approved Measure P in 2014, which extended the sales tax for public safety indefinitely.

In an interview, Scalmanini said that if Measures Y and Z pass, any revenue raised would be in addition to the current budget for fixing streets. The worst streets, he said, need to be reconstructed entirely, rather than making do with a coat of slurry or chip seal. He identified three thoroughfares that will be repaired whether the tax passes or not: Luce, Observatory, and Washington Avenues, all on the south end of town.

At a forum in Ukiah on September 29, private citizen Ed Haynes spoke out against Measure Y, arguing that “there are city funds to be found in the existing budget for street repair. It’s just a matter of priorities.” He added that, in his opinion, paying for a number of projects and consultants had not been a wise use of city money. He urged those in attendance to make Ukiah “business-friendly” by voting against Measure Y, saying that “Government taxes always have unintended consequences.”

Other cities in Mendocino County that have enacted similar sales tax measures are Fort Bragg, with a sales tax rate of 8.625%, Point Arena, and Willits, which each pay a sales tax of 8.125%.
Sarah Reith 10 October 2016