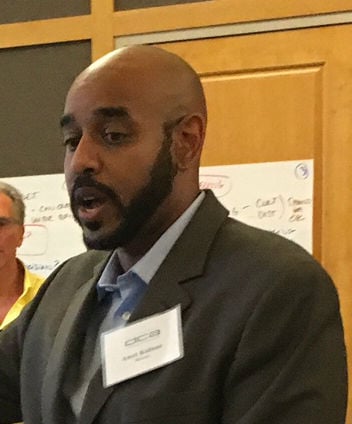 Director of the Cal. Department of Consumer Affairs Awet Kidane

SACRAMENTO — Staff from the California Department of Consumer Affairs (CDCA), including Director Awet Kidane, were at the Bureau of Medical Cannabis Regulation’s (BMCR) “Pre-Regulatory” meeting in Sacramento yesterday, for a six hour session of answering questions and taking public comments on California’s new medical cannabis licensing program. The Mendocino Voice caught up with Kidane for a brief chat.

Here is a transcript, lightly edited for brevity.

TMV: Can you talk a little bit about your background before this program started?

TMV: So this must be a big shift…

AK: This is a complete shift, absolutely.

TMV: What is the biggest challenge you face on cannabis regulations right now?

I have no desire to have caps on any licensees. My belief is an artificial cap creates artificial premiums on licenses, prices, etc. and it stifles innovation

AK: It is understanding how an already saturated market is operating, so we can not be disruptive, but at the same time…striking that balance between protecting the public and not being overly disruptive to the existing market.

TMV: Is there was something you could tell people who can’t come to these meetings? As you may know, Mendocino is a place that’s got a long history with cannabis.

AK: Let us know, don’t be shy! As you can see, we’re super open. We in no way profess to know everything, which is why we’re having these learning sessions — to figure out how it’s done, what their business model is, what makes sense. So, engage in the process: it helps everybody. [More information on submitting public comments below].

One big thing is that they’re hoping that local governments follow the state’s lead with regard to regulations — knowing that there’s dual licensure — they want to make sure that the locals do not stifle innovation.

TMV: I know it’s just the second meeting [Redding and Sacramento], but has there been anything interesting that’s come out of the differences between the meetings so far? Is there some information in particular you’re hoping to get from people that’s come up?

AK: One big thing is that they’re hoping that local governments follow the state’s lead with regard to regulations — knowing that there’s dual licensure — they want to make sure that the locals do not stifle innovation. That’s what I’m hearing, so far. It’s only been two, but that’s what I’ve heard, because I am getting a lot of questions, you probably heard them, about ‘my county doesn’t allow me to do this.’ We’ll talk to them, we’ll point them to our regulations, etc.

TMV: I know we’ve got competing possible regulations in Mendocino. And I know the California Department of Food and Agriculture is required by the new regulations to consider caps on the biggest cultivation licenses, is DCA considering doing anything like that?

AK: Not speaking for my colleagues at CDFA, but I have no desire to have caps on any licensees. My belief is an artificial cap creates artificial premiums on licenses, prices, etc. and it stifles innovation…It can create have and have-nots. That’s not the general direction my department is going.

The page will also include a recording of the Sacramento meeting presentation, which DCA Deputy Director of Communications Veronica Harms said should be posted within the week.

More coverage from TMV on the Sacramento and Santa Rosa BMCR meetings, as well as reports from other public meetings on California’s new regulatory cannabis programs coming soon — stay tuned!