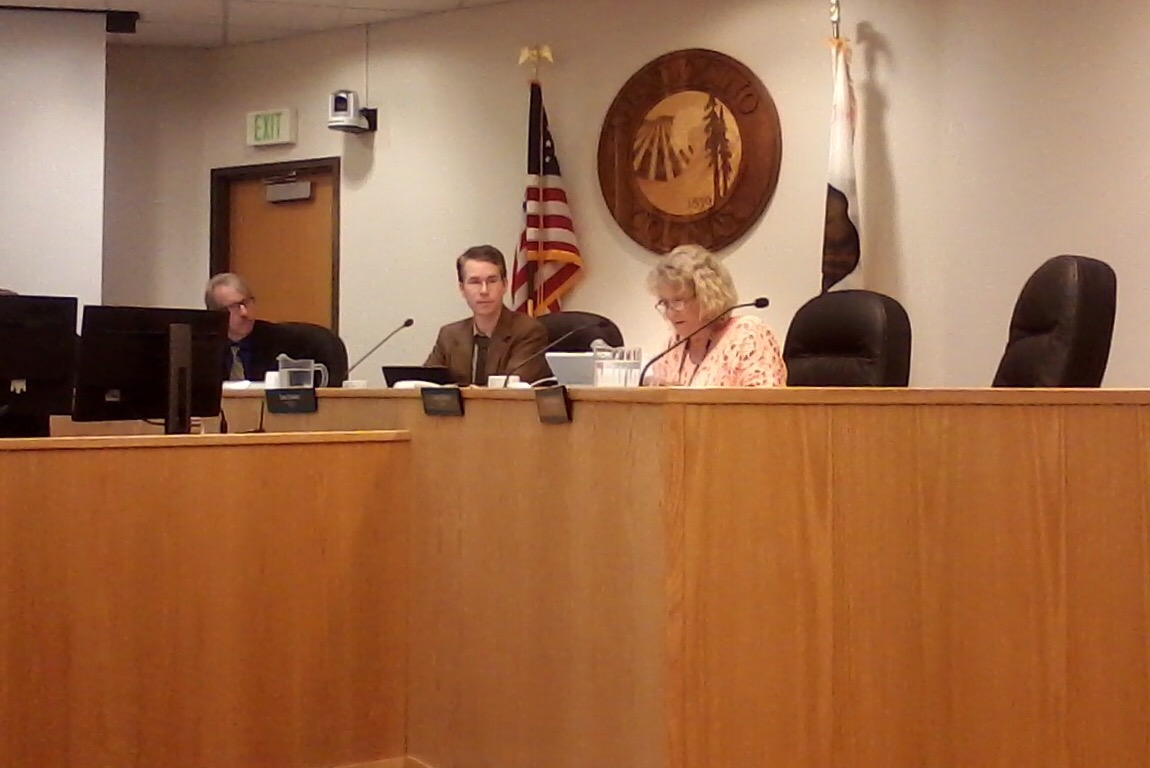 UKIAH — In a sometimes tense session, with impassioned speeches from both sides, the Mendocino County Board of Supervisors officially declared its opposition to Measure AF at today’s meeting. Supervisors John McCowen, Carre Brown, and Dan Gjerde voted for the motion to oppose AF, with Supervisor Tom Woodhouse absent, and Supervisor Dan Hamburg recusing himself, at the Sept. 20 meeting. The vote is largely symbolic, and non-binding, but does represent a strong statement of opposition to the citizen initiative, also known as the Heritage Act. Rather than pass Measure AF, which would regulate cannabis in Mendocino County, the board urged citizens to vote “no” and allow the Board the time to pass its own cannabis regulations.

The motion was met by a small cast of the usual advocates and dissenters, who spoke during the public comment period. Yet, though this debate ostensibly revolves around arcane points of environmental and planning regulations, the tenor and substance of today’s discussions centered on questions of process and propriety, with the anti-AF group condemning the measure as an end run around democracy, and the pro-AF faction insisting that nothing could be more democratic than the initiative process of gathering signatures for a petition and putting a measure to a general vote. And as the discussion drifted from policy specifics it became clear that the two sides not only disagree on the details of what cannabis regulation should look like, they fundamentally disagree on the process by which the county should arrive at these laws.

Former county supervisor Hal Wagenet kicked things off with some rhetorical flourishes: “Today I heard you talk about natural disasters and how to deal with them, from my perspective Measure AF is an unnatural disaster…We pledge allegiance to the flag with liberty and justice for all…all the people didn’t have anything to do with the creation of Measure AF, a narrow segment of our populous did.” He stated that he believes that laws should be developed in a “full public transparent process,” but that instead “The minority is coming in and amending our general plan…” Of course, passage of Measure AF would require a majority vote of county electorate.

He added, “I don’t think we would allow the forest industry or the nuclear power industry to regulate itself, or to propose its own legislation, so why would we let the marijuana industry do the same thing.”

As a point of reference, a quick look at the current California Board of Forestry and Fire protection reveals that several of its eight members have consulted for logging companies; three were formerly employed directly by logging companies including Sierra Pacific; and one member, Michael Miles, “is currently the Director of Forest Science and Policy for Humboldt and Mendocino Redwood Companies,” according to his official bio. That is to say, an employee of MRC currently sits on the board which regulates MRC. So, whether or not this is a good idea, it is in fact common practice.

“Maybe you guys don’t want us here, maybe you guys would rather have retirees from the bay area come and live here.”

Both Supervisors Brown and McCowen emphasized their view that Measure AF was not developed through a collaborative or public process, and was therefore less inclusive and democratic. And McCowen stressed that today’s vote was not anti-cannabis, but aimed specifically at Measure AF.

But one commenter took issue with the notion that the Board of Supervisors constitutes a venue for inclusivity. Corinne Powell of Ukiah said, “In the opposition I see a tremendous amount of hypocrisy I see cronyism…we have prohibitionists in environmental dress.” She cited the lack of permit requirements required for other types of large agricultural projects, like the lavender field next to her house, adding that permitted cannabis growers would be subject to state regulations, and the North Coast Water Board’s regulations.

With the many arguments from principle and procedure advanced by both sides, it was a plainspoken grower who pointed to the cultural cleavage that has long shaped the politics of Mendocino. The man, who identified himself only as Leif, said, “Maybe you guys don’t want us here, maybe you guys would rather have retirees from the bay area come and live here.”

“I do think it’s a mischaracterization to call this a hijacking or to call this some tiny minority that’s trying to run the county,” he began. “I think initiatives are a time honored part of American government — California  government — and I think for the board to put its thumb on the scale is really not advisable.”

The sentiment that this is an issue of survival was repeated throughout the public comments, with several speakers worriedly noting the rapid movement in neighboring counties to liberalize and expand their cannabis industries.

At the end of the comment period Supervisor Hamburg, who had earlier recused himself, came forward to speak as a private citizen, not for or against Measure AF, but against the Board taking any position. “I do think it’s a mischaracterization to call this a hijacking or to call this some tiny minority that’s trying to run the county,” he began. “I think initiatives are a time honored part of American government — California  government — and I think for the board to put its thumb on the scale is really not advisable.”

He continued, “I just think that this would be a case in which it would really be advisable to for the board of Supervisors to let the people speak — they have gone through the process, it’s not a process which is anything unusual or extraordinary, and I think in this case you should just let them decide which route they want to go.”

Supervisors Gjerde took a conciliatory tack, saying, “I understand why the initiative was drafted in the first place, I think there was palpable concern about how quickly the County of Mendocino would move on its own.” But he added that he would prefer the Board continue to draft these ordinances, believing that the longer Board process will ultimately yield a better law, and one that will leave the county better protected from lawsuits.

After the public comments Brown took a moment to say that she felt very insulted by some of the things that had been said.

The full text of the motion:

Agenda Item No. 6B – Discussion and Possible Action Regarding A Request from the

The Mendocino County Board of Supervisors endorses a “No” vote on Measure AF (also known as the Mendocino Heritage Act) for the following reasons: