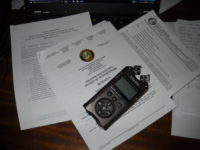 A pile of documents on the ordinance - Sarah Reith

UKIAH — The county’s cultivation policy took a small step towards completion this week, when, after months of discussions about plant count vs. square footage, parcel acreage and the meaning of various acronyms, the Board of Supervisors refined what they wanted to see in the upcoming policy to regulate cannabis cultivation. Important aspects of the ordinance as it currently stands are a limitation of cannabis cultivation to the “inland” region of the county; a thorough system of permits for different kinds of land-use zones, a system of fairly rigorous environmental controls, the county’s version of an appellation seal if inspection requirements are met, plus a county certification of being “sustainably farmed,” if practices equivalent to the USDA’s organic standard are met.

The BoS is currently engaged in a months-long process of hearing reports and discussing options concerning the proposed cannabis ordinances. Devising these policies can be painstaking work, as the county strives to avoid the pitfall of litigation while cultivating a tax base of people accustomed to operating outside of the law and taxes code.

County staff will decide by early October whether the proposed policy warrants a full Environmental Impact Review (EIR) or a mitigated negative declaration.

Fourth District Supervisor Dan Gjerde opined last week that the project warrants a full EIR, so the county can avoid losing a lawsuit. Even though the EIR is a lengthy process, he believes that skipping it would not necessarily save time in the event of a protracted suit.

Second District Supervisor John McCowen disagreed, saying it may be too early to conclude that an EIR is necessary, especially since such a process may make it impossible for permits to be issued by 2017.

The most recent part of the cultivation-crafting process has been a review of planning documents. At their September 13 meeting, the Supervisors heard an update from the Mendocino County Department of Planning and Building Services on the county’s draft ordinances, including discussion on proposed zoning regulations, the California Environmental Quality Act (CEQA), and the official “project description” developed by North Coast based engineering firm LACO.[footnote]LACO specializes in planning, permitting, and environmental compliance and has been retained by the county for other work as well, particularly in compliance with the Surface Mining and Reclamation Act.[/footnote] Further discussion on the same subjects took place at the next BOS meeting on September 20.

In the dry language of government policy, a project description is a document used to clarify exactly what a project is trying to accomplish. In this case, the “project” in question is the two county cultivation ordinances, Chapter 10A.17 of the Mendocino County Code, and Chapter 20.242 of the Mendocino County Zoning Ordinance. The description lays out exactly where the permitted activity will be allowed and attempts to assess the impact this activity will have on the environment.

Mendocino County Chief Planner Andy Gustavson said his department was already soliciting comments from agencies on the environmental impacts of the ordinances. He expects the formal public comment period to begin once the analysis is completed in early October. A Planning Commission meeting is tentatively scheduled for November 3. Gustavson hopes for a public hearing on the document two weeks after that, a schedule he characterized as “aggressive.”

As the ordinances stand, ten types of cultivation permits will be available in certain zones. These include Forest Lands and the Timber Production Zone, although no grows established after January 1, 2016 will be permitted in these zones. If these ordinances become law, starting in 2020, new cultivation sites will only be permitted in the Ag Zoning District. [footnote]Or in watersheds where a watershed assessment has determined that the watershed can support new cannabis grow sites. Sites must also avoid prime soils, steep slopes, and oak woodlands, where possible.[/footnote]

Further updates to the ordinance include increasing the small indoor permit type from 2,000 square feet to 2,500; allowing generators to be used as a secondary power source for off-grid operations; and more restrictive requirements on cultivators who transfer to a new location. Planning and Building is incorporating elements to the Uniform Nuisance Abatement Ordinance that will apply generally, rather than just to cannabis. Also, the question of whether permit types for outdoor cultivation would be based on square footage or plant count has gone back and forth for the last several meetings. It now appears to be firmly settled that square footage is the accepted measure for cultivation.

Executive Office Analyst Sarah Dukett said her office was planning to have a general outline of other license types available for review by the October 17 General Governance meeting, and hoped to have a draft of that ordinance available by November or December.