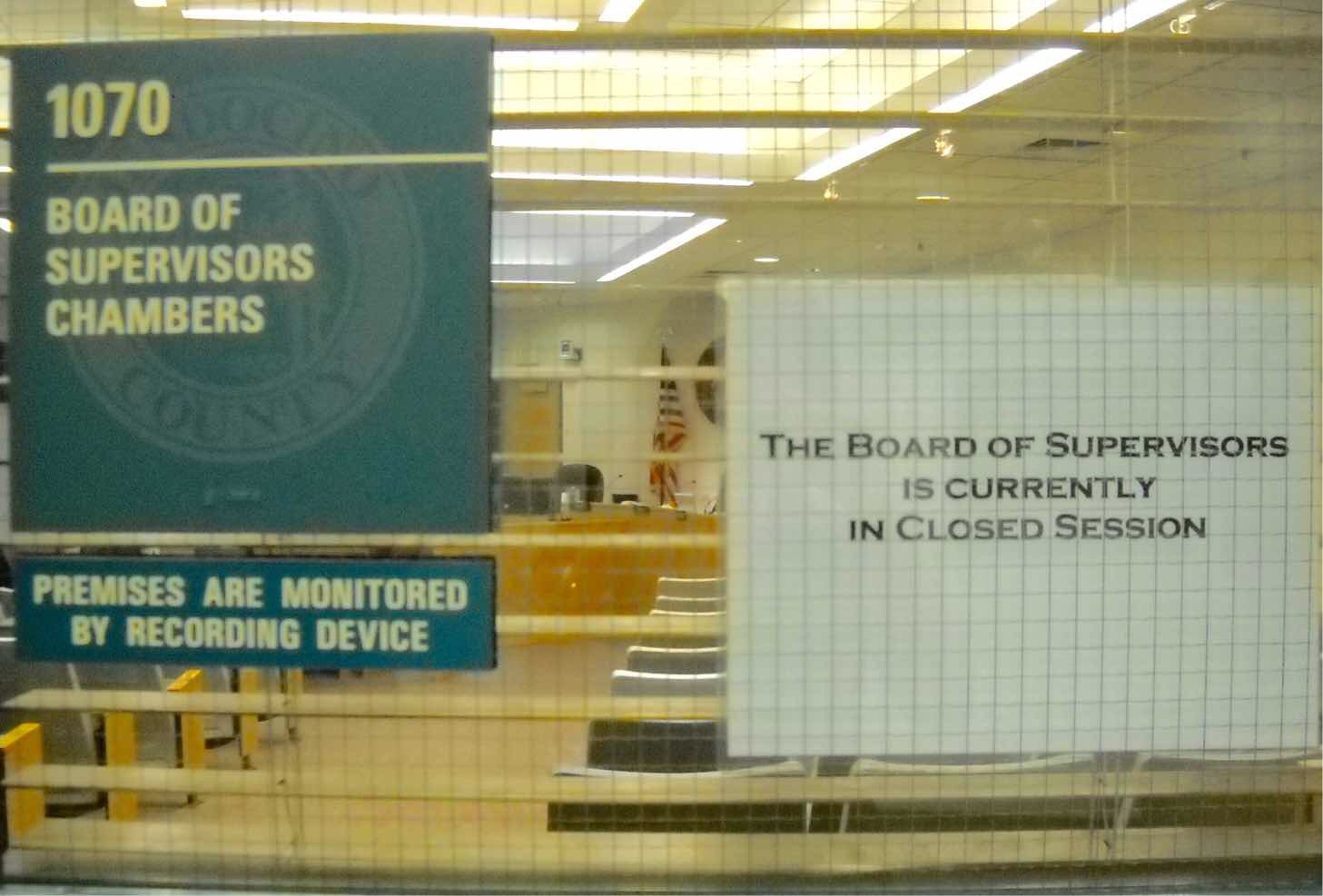 UKIAH — The Tuesday, September 20,  meeting of the Mendocino County Board of Supervisors began on a worrisome note, with Sheriff Tom Allman informing the Board that Search and Rescue teams are searching for two Yuba County hunters who are lost in the Covelo area.

Next, Steven Johnson of Mendocino Redwood Company(MRC) came before the Board to object to a consent calendar item, which recommended that the Board deny a request made by MRC for a property tax refund. The tax was levied by the Albion-Little River Fire Protection District.

Mr. Johnson argued that the tax is illegal and does not apply to MRC, under the provisions of Measure M. With his voice audibly shaking, he suggested the County avoid a costly judicial process, and said that if MRC were to win such a process, he believes the company would likely recover hefty attorney’s fees.

A notarized letter submitted to the Board and signed by MRC CEO Robert Mertz states that “MRC’s commercial timberland has been erroneously and/or illegally assessed,” and requests a refund from the county in the amount of $9,384.18. In addition to the refund, he requested that the county not issue MRC tax bills, under Measure M.

Second District Supervisor John McCowen requested that Johnson provide legal citations to County Counsel and the Board. County Counsel Katharine Elliott said she had had several meetings with Johnson, but that the issue is complicated, as it involves the fire district, which is a third party.

The Board then interviewed two applicants for positions on the Assessment Appeals Board, an institution which conducts hearings on property assessment disputes between the county assessor and taxpayers.

Mr. Leland Kraemer, who stated on his application that he is a real estate agent with 48 years’ experience, was appointed as the primary member.

Mr. Lenord Swope, whose application characterized him as a CPA with 12 years’ experience as a senior staff services analyst with Mendocino County Health and Human Services Agency, was appointed as the alternate member. Other members are James-John Ronco, Maryellen Sheppard, and Richard Selzer, who serves as an alternate.

The Board then moved to adopt a policy for the formation and governance of Municipal Advisory Councils (MACs). MACs are groups of volunteer citizens, appointed by the Board of Supervisors to act as liaisons between the community and county government, holding meetings to help inform the public about policy. One of their tasks is making recommendations to various decision-making bodies.

A point of discussion at several recent Board meetings has been whether MACs must phrase their recommendations in the form of a formal resolution or if a simple letter would suffice. Many MAC members find this requirement onerous, but McCowen has stated that he believes a formal resolution would make it perfectly clear that MACs represent only themselves when they correspond with other entities.

The most current draft policy contains no such requirement. The motion to approve it carried, with McCowen dissenting and Third District Supervisor Tom Woodhouse absent.

The Board then approved a county contribution of $100,000 to a USGS study of the Russian River Watershed (RRW), from Potter Valley to Santa Rosa. The total cost of the project, which is projected to last from 2016-2019, is $1,633,700, with the State, USGS, and the Sonoma County Water Agency (SCWA) also contributing funds.

In order to be compliant with the Sustainable Groundwater Management Act (SGMA), groundwater agencies must be in place by June 30, 2017, and plans for the same must be developed by January, 2022.

Sarah Dukett, an Administrative Analyst with the county Executive Office, said that the area of study currently includes three groundwater basins, but that more might be included through the course of the study.

According to an analysis that accompanied the BOS agenda packet, the main objectives of the study are to refine the understanding of the RRW, and develop a watershed/groundwater-flow model to improve regional water management. Cooperating agencies are the SCWA and California State Water Resources Control Board (State Board).

Rick Eller, of the Office of Emergency Services, then gave a presentation on a National Incident Management System, which he said is a system that began to be developed after 9/11 to help communities “prepare for, respond to, and recover from disasters.” He advised residents to have one week’s supplies rather than the standard recommended three days’ worth, which emergency management agencies often consider sufficient for less rural communities. He said one reason it is important to have a well-executed plan in place is that FEMA and the State will not reimburse accidental double ordering of supplies or assistance. This was not an action item.

The Board met in closed session, discussed AF, broke for lunch, and returned for further items.

Earlier in the day, the Board of Supervisors heard from Air Pollution Control Officer Robert Scaglione, who spoke on behalf of the Mendocino County Air Quality Management District Board to recommend the continuation of Ms. Terry Gross’ legal services. According to Scaglione’s memo to the BOS, “The District is facing two lawsuits from a community group opposed to an asphalt plant in their neighborhood and has been sued by the project applicant…under Ms Gross’ guidance the District sued the applicant for unresolved violations and filed a challenge to the applicant’s lawsuit.”

In his brief remarks to the Board, Scaglione said, “I think she was extremely instrumental in bringing the parties to the table to work out some sort of settlement which we’re in the process of now, so we’d just like to continue this process and get this thing over with and move on.”

After the break, a closed session period, and the approval of a resolution officially opposing Measure AF, the Board heard a sales pitch from AirCon Energy, a general contractor that offered to design and carry out upgrades to county buildings. AirCon also offered to help the county obtain third-party financing to fund the project, which the representatives said would obviate the need to come up with capital. They also offered to take a number of cost-savings measures, especially with the use of alternative energy.

Supervisor McCowen was especially interested in what the company could provide in terms of solar, since Ukiah, which is in his district, is already a Joint Power Authority (JPA) and does not rely on PG&E. AirCon told him a single large array was an option.

Fifth District Supervisor Dan Hamburg expressed an interest in taking AirCon up on its offer of a free feasibility study, said option was recommended by Chris Shaver of the Executive Office. The representatives agreed that the company, which did work on HVAC and lighting systems in county buildings in 2002-03, could do the study and come back to the Board in 60-90 days with more information. The motion to authorize the study carried unanimously, with Woodhouse absent.

Some confusion about who had which version of a document accompanied a public hearing about changing air pollution control rules to conform to federal regulations.

Air Pollution Control Officer Robert Scaglione came before the Board, which convened as the Mendocino County Air Quality Management District to hear the item. Mr. Scaglione explained that, in order to comply with changing EPA standards, the District is required to update its State Implementation Plan (SIP) by early October.

The EPA has asked the District to withdraw several rules from its SIP, including an unenforceable regulation about greenhouse gas emissions. A memo accompanying the public hearing stated that “Rules that are withdrawn from the SIP or from submittal to the SIP will remain in effect as local regulations enforceable by the District.”

The motion to adopt the proposed amendments, contingent upon making sure County Counsel, the Board, and Scaglione all had the same documents, carried unanimously, with Woodhouse absent.

The Board also heard from the Dept of Planning and Building Services about the county’s cannabis cultivation ordinance. This was a continuation of a discussion from the BOS meeting of September 13, where the Board explored details of the project description created by a private planning services company, LACO. The Mendocino Voice will run a full story on this agenda item soon.