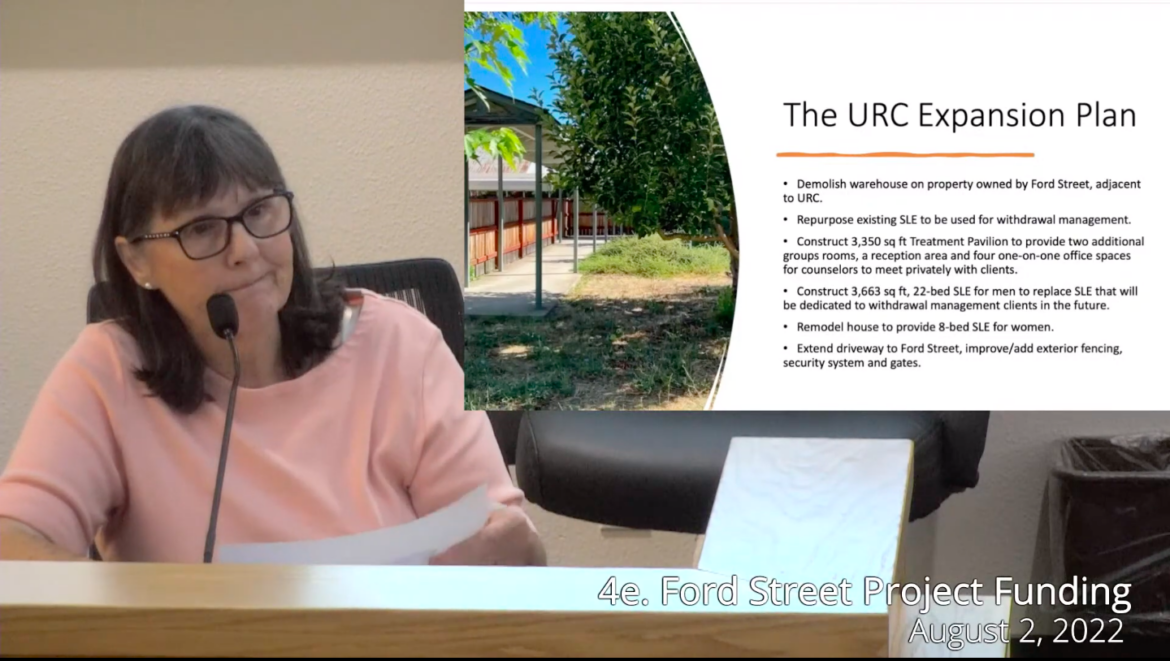 Screenshot from the 8/2/2022 Board of Supervisors meeting

The Ford Street Project is asking for funds to expand its sober living environment services.

The expansion of the Ukiah Recovery Center, a site for treatment of substance use disorders operated by the Ford Street Project, is partially stalled after the Mendocino County Board of Supervisors asked the organization and its supporting supervisors to reevaluate its funding sources.

Members of the Ford Street Project, a center that provides sobriety services to people with substance use disorders in Mendocino County, submitted a proposal to the Board of Supervisors at its meeting Tuesday asking for funding to support an expansion of its sober living environment. Executive Director of the Ford Street Project Jackie Williams asked the board to approve allocation of about $1.6 million of funds from the Measure B mental health sales tax and $2 million of settlement funds paid to the county from an Amerisourcebergen opioid settlement.

In fiscal year 2021, the Measure B fund balance was about $26.3 million, according to a document released by the oversight committee.

The opioid settlement is not finalized, and funds would come to the county in approximately $241,000 per year for nearly two decades, County CEO Darcie Antle said during the meeting. If $2 million of settlement funds were committed to the Ford Street Project, the county would need to find funds elsewhere as the settlement funds trickled in.

But after several hours of discussion, the board asked Supervisors Maureen Mulheren and Glenn McGourty to reevaluate the funding sources for the project to ensure funds from both the Measure B tax and the opioid settlement were distributed equitably across the county. BOS Chair Ted Williams was most concerned that an overwhelming majority of the funds going to a project in Ukiah would leave the coast with little to no money to help people who can’t make a trip to Ukiah.

“People on the south coast tell me there are cases [of addiction], but the services are too far so they give up. They’re not going to Ukiah for sober living, that’s not their community, that’s a four hour round trip,” Supervisor Williams, who represents the county’s 5th district, said in the Tuesday meeting. “I think this is a good plan but I’m more and more nervous that Measure B is supporting one part of the county and they need to be spread out given that they’re collected from all corners.”

The approximately $4 million project would repurpose an existing space at the Ukiah Recovery Center — where people recovering from addiction or overdose stay to manage sobriety short-term — to serve as a withdrawal management center, outpatient treatment site, and 3,663 square-foot, 22-bed sober living environment, Ford Street Executive Director Williams said. The funds would upgrade a facility that serves not only Ukiah residents, but also coastal residents, she continued.

“The first 30 days, when somebody is in a residential treatment program like ours, they don’t have much access to leaving property. I mean, part of what we do is really trying to create a quiet, contemplative, supportive space for people,” Executive Director Williams said in an interview with the Voice.

People using the sober living environment would not be driving back and forth to the coast every day, she continued. But Supervisor Williams still urged the board to reevaluate how to fund the Ford Street Project and find Measure B funds that could be allocated to recovery services along the coast.

“Everything I’ve read shows that substance abuse treatment works best when it’s in the local community, so the idea of telling people we have a central service that’s a four-hour round trip away, I’m afraid we won’t get the same uptick we would if we were to treat it in place,” Supervisor Williams told the Voice in an interview. “And in the end maybe we’ll find that we just won’t have the dollars to do it, but I think we should start with the perspective of making sure we cover our entire geography before limiting to just one central service.”

The Ford Street Project is asking for $2 million of opioid settlement funds to support the sober living environment expansion partially because the Mental Health Treatment Act Citizens Oversight Committee (a committee formed to evaluate uses of Measure B funds) was concerned about using only Measure B funds to support the project, County Mental Health Director Jenine Miller said during the Tuesday BOS meeting. Miller serves on the oversight committee.

Mulheren and McGourty will take the request back to the Measure B oversight committee and determine how to equitably distribute opioid settlement funds. Meanwhile, the Ford Street Project will move forward with $3 million construction on a treatment pavilion for which Executive Director Williams secured state funding. The treatment pavilion will provide two additional group rooms, a reception area and four one-on-one office spaces for clients to meet with their counselors.

She hoped to move forward with the projects simultaneously.

During the Tuesday meeting, Supervisor Williams said he supported the project but didn’t want to move forward with approving funds before knowing if they were equitably distributed across the county.

Mulheren said it’s a project she hopes to continue working on in order to help Mendocino County residents with substance use disorders.

“We know that we have sharp increases of overdose in our emergency room, we know that we have high levels of opioid abuse in Mendocino County,” Mulheren said. “We’re not asking for a check today, we’re asking for support for ongoing conversations.”
In 2020, the opioid death rate in Mendocino County was about 26 per 100,000 residents, some of the worst in the state, according to the California Overdose Surveillance Dashboard.