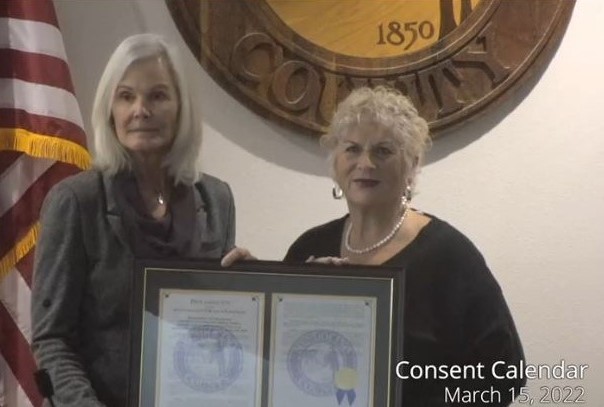 MENDOCINO Co., 3/17/22 — Chief Executive Officer Carmel Angelo officially retires this Saturday, March 19, after 12 years on the job and 14 with the county. Tuesday morning during her final Board of Supervisors meeting as CEO, Fifth District Supervisor and Board Chair Ted Williams read aloud a proclamation from the consent calendar honoring the outgoing leader.

“She has earned a well deserved rest and I wish her the very best in retirement,” Williams said. “Now therefore may it be resolved that the Board of Supervisors of the County of Mendocino hereby recognize and honor Carmel Angelo for her many years of service and dedication.”

Angelo helmed the county during a series of historic governmental challenges including the housing crisis, legalization of recreational cannabis, catastrophic wildfires and subsequent recovery efforts as well as two years of a coronavirus pandemic that’s killed 124 Mendocino County residents so far. Her leadership was also the subject of a critical report from the Mendocino County Civil Grand Jury titled “Who Runs Mendocino County” — which found that failures of the board of supervisors create gaps in leadership that allowed or required the CEO to accumulate too much executive power.

“She has the ability to work with all sides to bring resolution to even the crunchiest of issues,” said State Senator Mike McGuire in a Zoom appearance. “Any time there was a problem, you can count on Carmel Angelo to solve it.”

Congressman Jared Huffman and Assemblyman Jim Wood also made digital appearances to bid Angelo farewell, although Huffman’s remarks were hampered by technical difficulties. A series of county functionaries spoke up as well, including County Counsel Christian Curtis who said he’d experienced some of his “proudest moments” in government working alongside Angelo, and Interim CEO Darcie Antle — who served as assistant CEO under Angelo and will now be filling her role until a permanent successor is selected.

“You have done a wonderful job with this county and have taught me so much,” Antle remarked in an emotional public comment.

“Watching you in the disasters in ‘17 was amazing,” Antle said. “We have gone through three major fires, PSPS (public safety power shutoffs) and two years of Covid — 6 a.m. in the morning to 10 p.m. at night and if something happened in between, we were all on the line together. You pulled together a great team.”

It was an extended love fest that carried on for more than 25 minutes. Near the end of public comment, however, former supervisorial hopeful John Sackowicz called in to describe the proclamation as “patently dishonest.”

“I would like to mention the ways in which Ms. Angelo has hurt the county… Starting when she started as CEO, you had mass layoffs, mass firings, mass furloughs of about one-third of county workers, and the remaining workers were put on a salary freeze for years,” Sakowicz said. He went on to accuse Angelo of privatizing county jobs and perpetrating an unprecedented power grab.

“Well she is a strong woman, and unfortunately in 2022 we as a culture still struggle with civility,” Supervisor Williams said in retort.

The consent calendar (including Angelo’s proclamation) was unanimously approved, with the exception of a $1.8 million agreement with Redwood Community Services for the operation of a residential treatment facility for mental health crises. Angelo didn’t say much during the ceremony in her honor, but later that day she expressed concerns about the public’s disillusionment with government in an open letter to the board urging them to “seek information, rather than listening to the vocal minority that defames county representatives for self-satisfaction and personal gain.”

“These attacks damage the County’s ability to recruit and retain good employees,” Angelo wrote. “Public comment & criticism come with the job of elected and appointed officials, but those constant false allegations make it difficult to promote a career in public service.”

She recorded her goodbyes to county personnel in a Youtube video titled “CEO Angelo’s Final Thoughts” March 7. That video has been included below: