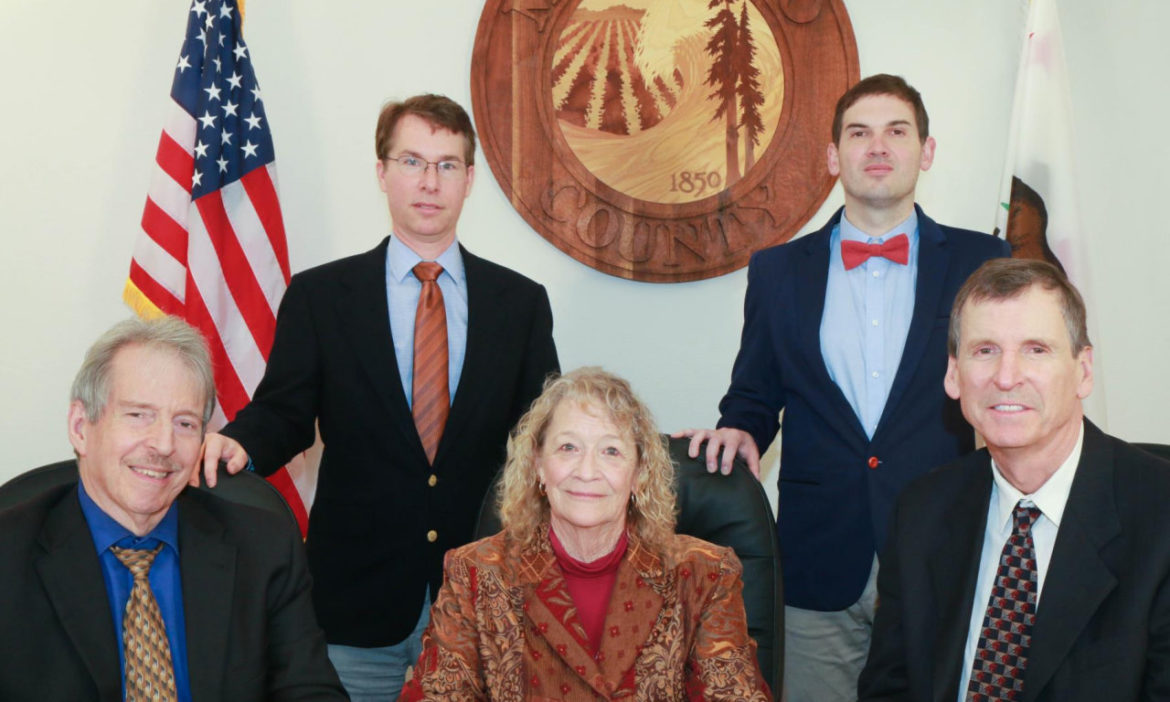 MENDOCINO Co., 6/17/19 — “Who runs Mendocino County?” That was the question posed by the Mendocino County Grand Jury, a group of 19 people tasked with providing oversight to local government, which issued a report on May 31, questioning the efficacy of the county’s board of supervisors, and the balance of power between the board and the county’s chief executive officer, Carmel Angelo.

The Grand Jury finds that the supervisors’ activities are largely responsive instead of forward-thinking, and that the board “reacts to crises as they arise,” critiquing the county representatives for failing to “establish and publish strategic county-wide policies with effective long term goals that address county-wide issues of public safety, health, economic, environmental and other needs of our communities, as it is charged to do.” The jury finding notes this approach creates gaps in governance, and leaves much power the CEO.

The efficacy of the Board of Supervisors and the role of the county’s CEO has been the subject of much public discussion in Mendocino County, since a series of supervisors absences, management turnover (particularly in the cannabis permitting program), and after a series of significant raises for the supervisors, CEO, and management staff. The Grand Jury places the bulk of the blame on the supervisors for the lack of long-term strategic planning, noting the Board has effectively “abdicated” its role in creating governance plans — resulting in “an enormous responsibility” placed on the CEO. The report calls for the board to be more responsive to public concerns, encourages the supervisors to set timelines and benchmarks for directives to the CEO and staff, and requests more detailed updates than currently provided in the CEO’s reports. However, the grand jury also highlighted positive developments in Mendocino County’s “board dynamic” with the election of two new supervisors, John Haschak in District 3 and Ted Williams in District 1, along with the new board Chair, Supervisor Carre Brown.

In California, a county’s grand jury is a 19 person board of Mendocino County residents who serve for a year at a time, and instead of investigating criminal complaints, are tasked with investigating the government: they are “empowered to investigate the operations of county, city and district governments; provide civil oversight of local government departments and agencies; and respond to citizen complaints.” The group is allowed to take up any topic of its choosing and take as long as it sees fit to issue a report, and is also able to require a response from individuals or organizations. In this case, a response from both the board of supervisors and the CEO is required within 60 days.

This report covers a number of findings, and makes specific recommendations towards increasing transparency and efficiency in county governance. The jury notes that much of the supervisors’ activities result in directives to the CEO’s office, but these directives often lack “specific timelines, benchmarks and completion dates,” or if so, they are not well tracked, and can only be found by requesting information in person. The CEO’s reports were also highlighted as an area of potential improvement — the reports are often issued after the start of the regular supervisors’ meeting, and sometimes only contain brief summary overviews of ongoing initiatives. The report also calls for improvements to the county website to facilitate communication and provide a mechanism for the public to track developments.

Responsiveness to public concerns was another key issue raised by the jury. It is not uncommon for members of the public to attend supervisors meetings to state their calls and emails have gone unanswered, and the jury notes supervisors should track and responds to these requests, and could even respond and issue directives during public comment at board meetings. Typically, the supervisors refrain from commenting, and do not answer questions during public comment, especially for issues not on that day’s agenda. The report also calls for supervisors to provide methods for the public to submit complaints, and to hold regular town hall meetings in each district. Supervisor John Haschak recently announced a town hall meeting to be held in Willits on June 27.

The jury also noted that items of significance were often included in the “consent calendar,” a list of items voted on as a group without individual discussion, and called for that practice to be curtailed. The report also calls for a succession plan for the county’s CEO. The county transitioned to a CEO position to assist the supervisors with management in 2007.

A number of complaints concerning the county’s board of supervisors have gained purchase with the public in the last several years, particularly in regards to the authority of the CEO. Significant raises for supervisors, CEO, and county management raises have occurred alongside increasing delays in proposed raises for rank-and-file county staff and contract negotiations, increases to public fees and cuts to certain county services, and the ongoing absences or recusals from a number of supervisors on key issues. These include, after Tom Woodhouse’s absence, a long lack of elected representation in District Three, a region with many cannabis farms and businesses, and additional absences on the county’s Cannabis Ad Hoc Committee.

Approval of raises for supervisors and the CEO resulted in particular rancor, although only Supervisor Dan Gjerde voted against them, as they occurred while the county struggled against high attrition rates in part due to a lack of raises for front-line county staff, and other considerations of a reportedly tight budget. Supervisors also approved raises of several tens of thousands for management staff in the county counsel’s office, for the ag commissioner, and other department management positions.

Representatives of county employee union SEIU and members of the public questioned the calculations used to justify the raises, which compared Mendocino to wealthier counties. A recent study commissioned by the county found that county employee wages were at least 15% below the regional average, with a study by SEIU, which represents a number of county employees, finding some positions were closer 30 – 40% below market rate. County staff as well as their union representatives have diligently attended supervisors meetings for many months calling for greater equity in pay and highlighting the additional work created by numerous unfilled positions.

3 thoughts on ““Who runs Mendocino County?” The Grand Jury takes a look”