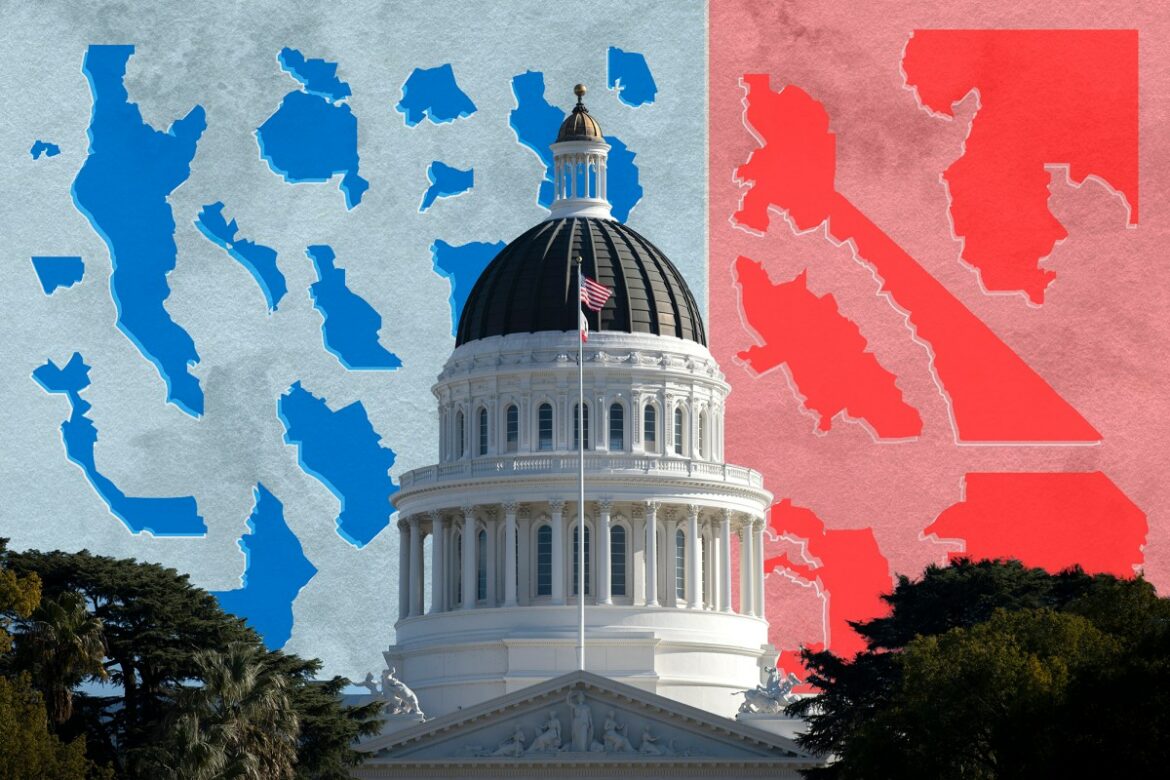 As the clock struck midnight on Feb. 10, 14 people scattered around California collectively exhaled in relief.

The 14 are members of the state’s independent citizens redistricting commission who drew 120 new districts for the Legislature, 52 for Congress and four for the state Board of Equalization that voters will use in this year’s election. The commissioners struggled at times to reach consensus, and their mapping was critiqued nearly every step of the way by some experts, advocates, elected officials and the public.

But after all the criticism, the commission approved the maps unanimously in late December, and Feb. 10 — the 45-day deadline for anyone to go to court to block the maps — came and went.

There’s still one more state hurdle to clear: critics have until March 27 to challenge the maps via a referendum — asking voters to reject them — before the new districts officially become effective. But there’s no sign any such costly effort is underway. (The maps could also be challenged in federal court as violating the U.S. constitution or the Voting Rights Act.)

“The absence of a state lawsuit challenging these maps is a testament to the effectiveness of California’s open, publicly accessible redistricting process and the design of its independent redistricting commission,” current commission Chairperson Russell Yee said in a statement.

“We worked hard to apply the constitutional redistricting criteria and consider testimony from throughout the state, especially from minority communities,” said Yee, a Republican professor and former pastor from Oakland. “While the maps do not please everyone, we believe they are fair and equitable. We would have confidently defended these maps in court, but are thankful we now won’t need to.”

The commission did face litigation earlier: An emergency petition filed on Nov. 30 on behalf of some Republican voters alleged that the commission held secret meetings with some interest groups, complained that an analysis of racially polarized voting wasn’t made public and challenged the selection of its legal counsel because the firm had previously worked for Democrats.

That emergency petition was denied by the California Supreme Court on Dec. 15.

Christian Grose, professor of political science and public policy at the University of Southern California, said that while the failure of prior lawsuits might explain the lack of litigation, so does how the commission did business. “A unanimous vote is a signal that something was done right,” he said.

Josue Franco, an assistant professor of political science at Cuyamaca College in San Diego, said the amount of public comment (more than 36,000 entries) as well as the failure of the petition, likely warded off more lawsuits.

“I think the lesson learned for any future commission is: If you continue to be as open and transparent and accessible as possible, you’ll continue to reduce the likelihood of any significant litigation,” Franco added.

That’s a bonus for taxpayers: Any of the $4.3 million set aside for litigation that isn’t used goes back into the state’s general fund.

The lack of lawsuits is somewhat surprising. After the first time California redistricting was done by an independent commission, in 2011, two lawsuits challenged the final maps, and another questioned the commission’s makeup.

And new election districts in other states are being taken to court. On Feb. 7, the U.S. Supreme Court reinstated a congressional map that a lower federal court ruled would disenfranchise Black voters. In December, the U.S. Department of Justice sued Texas, alleging that the maps drawn by a Republican-controlled Legislature and GOP Gov. Greg Abbott disenfranchise Latino voters. In North Carolina, the state Supreme Court threw out new congressional and legislative districts that the justices said were too partisan and ordered the Republican-majority Legislature to draw new ones by Feb. 18.

Even in other states where the maps were also drawn by independent commissions, there are lawsuits. In Michigan, state lawmakers say that the new congressional districts would dilute the voting power of minority communities. In Ohio, Black voters went to federal court seeking to block legislative maps.

Just before approving California’s maps and delivering them to the secretary of state on Dec. 27, commissioners noted the exceptional challenges they faced during their 18 months of work, including the pandemic and the delay of Census data that compressed their timeline to have new districts in time for the June primary.

Meeting deadlines and avoiding lawsuits aren’t the only measures of success. Other assessments could shape what statewide and local California redistricting looks like after the 2030 Census and beyond.

Ballot measures passed in 2008 and 2010 set the minimum criteria for fair maps: equal population, compliance with the federal Voting Rights Act and compactness of districts, among others.

But beyond that, some look at how well the new districts reflect California’s diverse population — with no race or ethnic group making up a majority.

According to the Public Policy Institute of California, the number of majority Latino districts increased “significantly,” with six more for U.S. House, three more for state Senate and an additional five for state Assembly – nearly matching the share of the Latino voting-eligible population at 30%.

There was less change for other ethnic groups. There are two Asian-majority state Assembly districts, up from one, but no state Senate or congressional districts. There are no majority Black districts.

While community groups were vocal during the process, some said the final maps attempted to address most, if not all, their concerns.

The true test of representation will be the results of elections this year and in subsequent cycles. A report by the USC Schwarzenegger Institute showed that the 2011 maps largely succeeded in helping to add elected officials of color in California between 2012 and 2020.

And while the commission is not permitted to consider the new districts’ impact on incumbents or political parties, another assessment is how politically competitive they become.

Still, Democrats will likely remain dominant based on the new maps, favored to win 41 congressional seats, 31 state Senate seats and 62 Assembly seats, according to the PPIC analysis. There were also 21 members of Congress, 13 state senators and 20 Assembly members put into the same districts as other incumbents.

Adding to the turnover and possibly changing the partisan balance, so far 21 Assembly members and state senators have resigned or have announced they’re not seeking reelection this year. Another seven senators are barred from running again by term limits.

“In the 2001 cycle, there was essentially a gentleman’s agreement that enabled everyone to run for reelection and stay in power,” said Jonathan Mehta Stein, executive director of California Common Cause, which pushed for the independent redistricting commission. “This was a process that was exactly the opposite. The commission was literally moving lines and making massively important decisions on a livestream. They’re going to stumble, and thousands of people are going to watch it. But I don’t think I would trade that for a cleaner alternative.”

While this California redistricting was heavily scrutinized, the 2010 commission dealt with its own challenges, including tight timelines and budget restraints. But they also had the advantage of being the first independent commissioners.

But some of the same problems remained: time management, a lack of clear guidance on how to assess competing communities of interest and a struggle to be consistent in making decisions.

There were also continued attempts by partisans to sway the commission — something researchers had warned after the 2011 California redistricting would only grow stronger. “Political forces that were baffled, angered, quietly involved, or generally thrown on the defensive will be much better prepared to exercise influence,” said a 2013 report commissioned by the League of Women Voters of California.

Former commissioner Jodie Filkins Webber said she was flabbergasted seeing the number of organizations that mobilized for this redistricting. Webber, a Republican, and Democratic commissioner Cynthia Dai wrote a commentary last year warning that too many closed sessions, while allowed, would erode the public’s trust in the process. The current commission routinely held private sessions during its marathon meetings.

“All of us who were commissioners are very protective of the institution and of an open process, which is why a lot of us were critical of the commission,” said Angelo Ancheta, the final chairperson of the 2010 commission.

Current commissioner J. Ray Kennedy, a Democrat from San Bernardino County who works as an international elections consultant, said that while the commission did more outreach, there is still room for more public education — for instance, explaining why the commission started from scratch, not from existing districts.

“I understood a lot of people were going to resist any redistricting, but I was still a little surprised at how many people said, ‘Don’t do anything to my district,’” Kennedy said in an interview. “I think that message did not get out as much, or it didn’t stick — that districts have to change. And so in the future, that would be a point of focus: How to help all Californians understand that districts have to change.”

Whether or not to start from a blank slate — as well as other administrative decisions — is up to each California redistricting commission. Said former commissioner Jeanne Raya: “I think it’s important that each commission not be tethered to the one that came before.”

And while, thanks to a push from the 2010 commission, the 2020 commission was given more time, its decision to count state prison inmates in drawing districts, combined with the Census delay, resulted in a time crunch.

“We need to look at the timeline in the future to make sure that there is enough time for all of these things to happen,” Kennedy said.

That and other lessons will be compiled into a report to the next commission, along with legislative recommendations. The commission is scheduled to meet Feb. 18 and 23 to discuss lessons learned and other topics.

The current commissioners, like their predecessors, may also travel throughout California and to other states to share the impact an independent commission can have.

Members of both citizen commissions agree that other institutions should learn from having a bipartisan group work together and reach consensus, especially in these politically polarized times, when 63% of California’s likely voters are pessimistic that Americans with different political views can still work out their differences.

“We built and exercised respect for each other and came up with something that all 14 of us believe isn’t perfect, but will provide good representation for California going forward,” Kennedy said. “I think that’s the story that really needs more focus in this time of hyperpartisanship…that we can put together kind of a random group of citizens to do civic work on behalf of the entire community and get it done.”