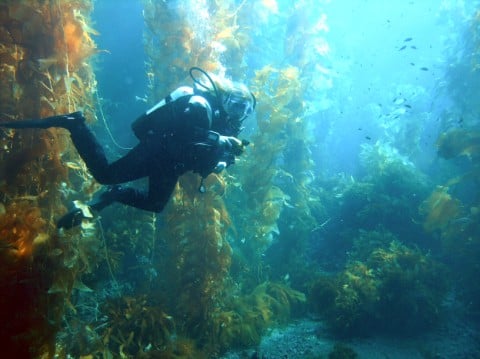 MENDOCINO Co., 2/23/22 — There will be a 3-year moratorium on commercial bull kelp harvesting along the Mendocino and Sonoma county coast after a Feb.16 decision by the California Department of Fish & Wildlife (CDFW), a shift supported by the InterTribal Sinkyone Wilderness Council, which consists of ten local tribal governments.

During a Feb. 16 virtual meeting, “The Commission adopted regulations to protect bull kelp that include a prohibition of commercial harvest in Sonoma and Mendocino counties, an annual limit of 8,000 pounds. in Humboldt and Del Norte counties and other measures to protect kelp,” notes the CDFW meeting summary.

More than 90% of the North Coast’s kelp forests have disappeared over the last decade, and CDFW has implemented a number of pilot projects over the last several years focused on improving the health of kelp forests, including one taking place along the Mendocino coast (read more here). The agency released an “enhanced status report” covering plans for the giant and bull kelp fisheries, CDFW’s first such report focused on a marine algae species, in January.

Tribes have been engaged in government-to-government consultations focused on the commercial kelp harvest, and had requested a 10-year extension from the state regulators, according to an announcement from the Sinkyone Council. However, the most recent decision includes the option for regulators to extend the closure in the future, beyond the three year moratorium established this month.

In a statement about the decision, InterTribal Sinkyone Wilderness Council Chairwoman Priscilla Hunter, noted, “As guardians of Mother Earth, the Tribes have the inherent responsibility of protecting nature. The ocean is telling us that it is injured and needs healing, so we need to heed that message and do all we can to help.”

Here’s the full letter in support from the Intertribal Council:

The California Fish and Game Commission voted unanimously on February 16, 2022, to adopt a three-year closure of commercial bull kelp harvest in State marine waters adjacent to Mendocino and Sonoma counties. The Commission’s action responds to changing oceanographic and ecological conditions that have caused dramatic declines in bull kelp (Nereocystis) in Mendocino and Sonoma counties in recent years, resulting in a 90% reduction of historic kelp coverage that involves ecosystem wide impacts. The Commission’s decision also signals the State’s growing responsiveness to Tribes’ concerns about increasing threats to traditional landscapes and seascapes critical for the continuation of their cultural lifeways.

For the past several years, the InterTribal Sinkyone Wilderness Council has facilitated a government-to-government consultation process between its member Tribes and the California Department of Fish and Wildlife to address serious Tribal concerns over commercial harvest in traditional territorial waters and to request closure of kelp harvest to allow for ecosystem recovery.

The Tribes have cared for ocean, coast and forest environments for countless generations. Our cultures, spiritual ways and identities are enshrined in these places, where our peoples have interacted respectfully with nature since the beginning of time. We now are experiencing phenomena never before witnessed—either in the long experience and memory of Tribal Nations, or in much more recent non-Indigenous recollections and records: massive die-offs of crucial indicator species, climate chaos, colossal fires, warming and acidifying oceans.

The Sinkyone Council is a leader in Tribal land and water protection efforts and the growing Land Back movement. In late January, Save the Redwoods League announced the return to Sinkyone Council of an old-growth redwood forest called Tc’ih-Léh-Dûñ (Fish Run Place).

“We are pleased the Commissioners made the right decision on this important issue, and that they seriously considered the cultural values and concerns the Sinkyone Council and its member Tribes have brought to the Commission’s and Department’s attention,” said Debra Ramirez, Tribal Chairwoman of the Redwood Valley Little River Band of Pomo Indians, who represents her Tribe on the Sinkyone Council’s board of directors.

While the Council had proposed a 10-year closure for commercial kelp harvesting, it appreciates the Commission has enacted the 3-year closure, with possibility for an extension if necessary.

“As guardians of Mother Earth, the Tribes have the inherent responsibility of protecting nature. The ocean is telling us that it is injured and needs healing, so we need to heed that message and do all we can to help,” said Priscilla Hunter, the Sinkyone Council’s Chairwoman who serves as Coyote Valley Band of Pomo Indians’ representative to the Council.

Governor Newsom’s Executive Order N-82-20 directs the Natural Resources Agency and other relevant agencies to “Collaborate with…tribal partners to incorporate tribal expertise and traditional…knowledge to better understand our biodiversity and threats it faces.”

The California Fish and Game Commission’s kelp harvest closure vote helps implement Executive Order N-82-20 and demonstrates the State can collaborate with Tribes and accord respect for Tribal intergenerational expertise that is informed by thousands of years of ecosystem knowledge, understanding and practice.