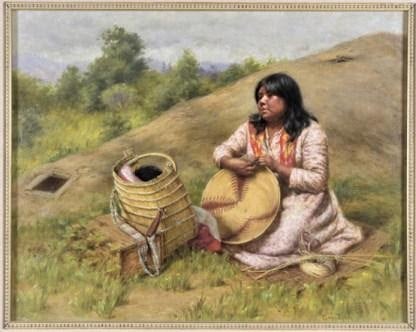 MENDOCINO Co., 12/7/21 —Mendocino County painter Grace Hudson is known for her depictions of local residents and landscapes, and many of her artworks are housed at the museum in Ukiah that bears her name. Next year, however, an additional 16 paintings will gifted back to the museum, and another two returned through a long-term loan, thanks to an arrangement with the Palm Spring Museum. These 18 paintings will be returning to Mendocino County from their current home as a gift, in part due to generous contributions from local funders to support the transfer costs.

“Palm Springs believed that by keeping the paintings in the public trust rather than selling them to private collectors was the right thing to do,” David Burton, Grace Hudson Museum Director, noted in the announcement. Here’s the press release from the Grace Hudson Museum:

A prized collection of artist Grace Hudson’s paintings are returning home to Mendocino County in a unique agreement reached with the Palm Springs Art Museum in Southern California.

The pact provides for the direct gift of 16 Hudson artworks to the Grace Hudson Museum in Ukiah, and a long-term loan of two other oil paintings.

The Palm Springs collection includes two oil paintings Hudson did in 1901 during a transformative sojourn in Hawaii. Her work from that period is rare.

Also in the gifted collection are five sepia portraits (bitumen on canvas) of local Pomo elders in the 19th and early 20th centuries, and oil paintings that depict a sweat lodge, hop fields, and an Ukiah Valley landscape with the subtle presence of a figure carrying wood in a Pomo burden basket.

There are two unfinished portraits, ‘Indian Girl’ and ‘Head of Indian Girl’, that Grace Hudson Museum staff believes will be useful for research purposes. Lastly, there are two small landscapes of historic Todd Grove, and the old Fish Hatchery that once existed along Gibson Creek on Ukiah’s west side.

Costs associated with the transfer of the paintings was underwritten by a grant from the Miner Anderson Family Foundation in San Francisco. Author/filmmaker Robert Mailer Anderson has deep ties to Mendocino County, where he graduated from Anderson Valley High School. An uncle, Bruce Anderson, is editor/publisher of the Anderson Valley Advertiser.

Norma Person, a Sonoma County philanthropist and widow of former newspaper publisher Evert Person, pledged her support if needed for the transfer agreement with the Palm Springs Museum in addition to making a generous contribution to help ease pandemic related financial losses at the Hudson. The Persons to date are the single largest financial contributors to the Grace Hudson Museum.

“We are happy to help return this special collection to Mendocino County,” said Robert Mailer Anderson.

Palm Springs Art Museum staff contacted the Grace Hudson Museum about the possibility of gifting the collection last May.

Rather than sell the individual Hudson art works to collectors on the open market, senior staff at the Palm Springs museum decided that gifting the artwork to the Grace Hudson Museum would be the best outcome for the public, scholars, and art historians.

“Palm Springs believed that by keeping the paintings in the public trust rather than selling them to private collectors was the right thing to do,” said Grace Hudson Museum Director David Burton.

The Miner Anderson Family Foundation awarded a $40,000 grant to the Grace Hudson Museum to cover the expected transfer costs of the Palm Springs collection. Sotheby’s estimated the collection could bring up to $200,000 if auctioned.

The Palm Springs Art Museum is shifting emphasis to modern and contemporary art, leading to its decision to gift the Hudson work. The museum in the early 2000s decided to move away from an art mission first defined in the 1930s. For decades the Palm Springs museum focused on natural history, the surrounding Cahuilla Indian culture, and later fine art.

Senior Palm Springs staff realized as the museum’s new direction evolves that the important Hudson collection would mostly likely remain in storage, and out of view of the public.

During the discussion between the two museums, Palm Springs staff asked the Grace Hudson Museum to pay all transfer-related costs associated with the gift of the paintings. Director Burton said he, current curator Alyssa Boge, retired museum director Sherrie Smith-Ferri, and former curator Karen Holmes reviewed the collection, and evaluated its potential importance. Burton traveled to Palm Springs to personally view the paintings and he found them to be in “good or excellent condition.”

“We concluded the Palm Springs collection would significantly expand and enhance what we do here”, said Burton.

The Ukiah museum is the single largest repository of artist Hudson’s work and is known nationally for the breadth of its collection of Hudson paintings and Pomo artifacts collected by the artist and her husband, Dr. John Hudson, a noted ethnologist.

How the Palm Springs collection of Hudson paintings was assembled is a study in art history.

Eleven Hudson paintings were donated to Palm Springs by C. Frederick Faude, a wealthy fine arts and antiques dealer who had showrooms in San Francisco and Sausalito. At the time, Faude’s collection of Hudson paintings was considered one of the country’s largest. Faude also was a benefactor of the Asian Art Museum in San Francisco, where a gallery is named in his honor.

Faude and his partner, San Francisco restauranteur Louis Foerster, lived in San Anselmo in Marin County where they donated fourteen acres of land for a public park that is named in his honor.

Three of the Hudson paintings coming to Ukiah were gifted to the Palm Springs museum by a trust established by the late actor and artist George Montgomery. Another Hudson painting was given by a trust of actor William Holden.

The newly acquired paintings from Palm Springs are to arrive at the Grace Hudson Museum in Ukiah in early January. Museum Director Burton said they will be the centerpieces of a new exhibit highlighting recent acquisitions, scheduled to open in February.