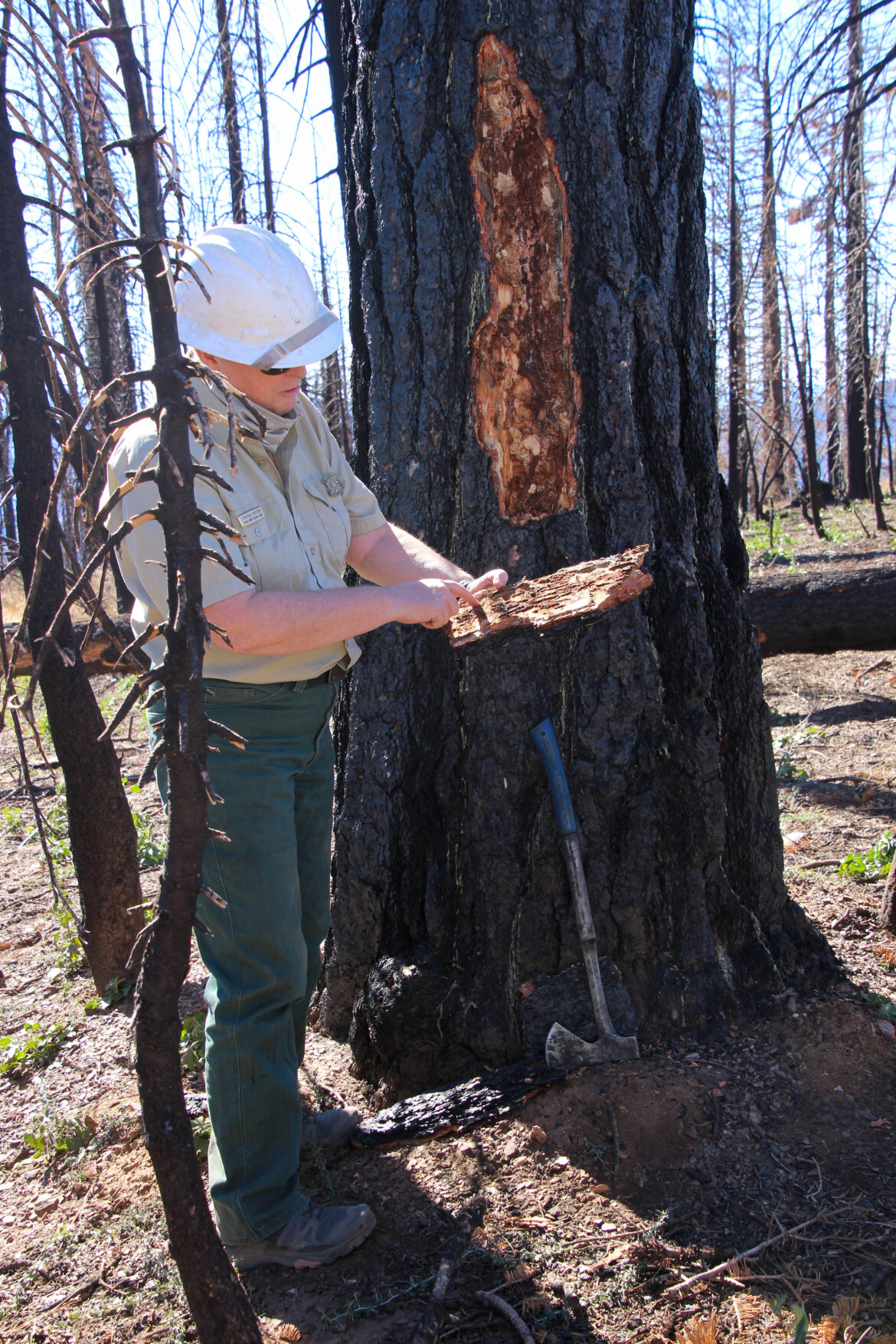 U.S. Forest Service entomologist Cynthia Snyder shows signs of an insect outbreak in a piece of bark during a trip through a burnt portion of the Mendocino National Forest on Saturday, Oct. 16. The insects are making it more difficult for the Forest Service to attract loggers to do the work of removing the dead and dying trees from the area burned by the August Complex Fire last year.

MENDOCINO Co., 10/25/21 — The U.S. Forest Service (USFS) is planning a restoration project on just over 2,000 of the 600,000 acres of the Mendocino National Forest that was burned in the August Complex fires last year. But whether the project will actually take place remains to be seen.

The Plaskett-Keller August Complex Phase 1 project involves cutting down the dead and dying trees on 2,163 acres in order to reduce the hazard posed by falling trees, mostly near roadways; reduce the risk of wildfire by reducing the amount of fuels, or flammable material, in the forest; recover what economic value is possible from the sale of the fire-injured timber; and study the short- and long-term impacts of salvage logging. But whether the Forest Service can do any of that hinges on whether the agency is able to attract licensed timber operators to do the work.

“If we don’t make the sale, then all our planning doesn’t matter,” said Loren Everest, the Forest Service’s district ranger for the Grindstone Ranger District. “The treatments don’t get done and we then have to figure out what Plan B is.”

The agency is in a race against time because the wood is already damaged and deteriorates all the faster if pests like Ambrosia beetles and round-headed borers get into it, as well as wood-decaying and staining fungi. During a field trip through the project area on Saturday, Oct. 16, Cynthia Snyder, a Forest Service entomologist, pointed out the boring holes and frass, or wood scraps, indicating the presence of the beetles in the wood. “This is one that loggers wouldn’t want because it’s got holes in it,” Snyder said. “That’s not going to make good product.” Staff estimated most of the trees would be merchantable for two years at most.

Beyond pests, the haul distance to mill sites can also prove to be a major constraint. The closest mill to the project area is a five-and-half-to-six-hour round trip, Everest said, making it infeasible to do more than one run a day. “Each mile they take that tree, the less money they make off of it,” Everest said. “It’s hard to make money that way.” That’s especially true given that there are other forests that have similar issues and are closer to mill sites. “It’s very hard for us to compete,” he said.

If the Forest Service can’t attract loggers, the taxpayers will end up paying the cost to get the fuels taken out of the forest. The science isn’t settled on the practice of salvage logging. A recent review of salvage logging research conducted by a global team of forestry experts, including a Forest Service researcher, found the practice doesn’t always reduce the likelihood of disturbances like wildfire and insect outbreaks, sometimes increases them, and is, itself, a form of a disturbance.

The Forest Service is aware of the need for more research in this area and set aside 26 acres for conducting research on the short- and long-term effects of salvage logging in its restoration plan. That research will evaluate the impact of logging all, some or none of the dead and dying trees in a given plot, including taking surveys on the conditions of the area every three to five years or as disturbances and projects take place.