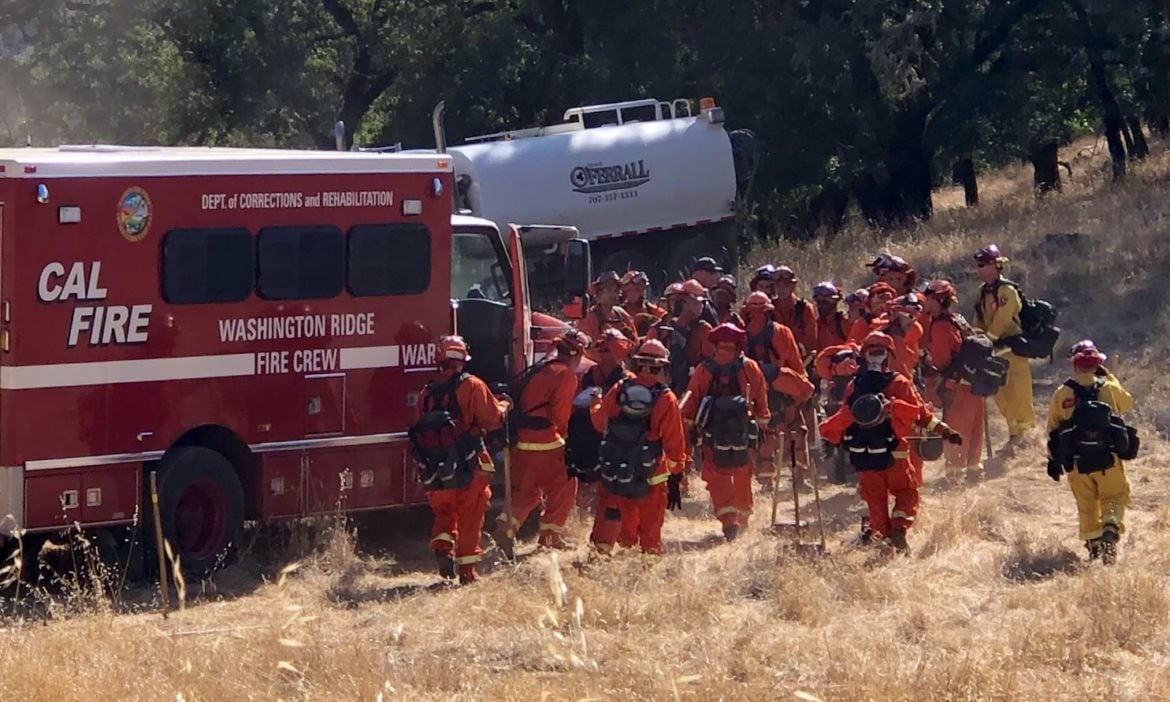 Prisoner hand-crews from the California Department of Corrections prepare to work the fire this morning - by A.F. Baumann

MENDOCINO Co., 6/1/21 — In Mendocino County, it is not unusual for California Department of Corrections fire crews to be the first to arrive at the start of a wildfire, and the last to leave once the fire has been contained and “mopped up.” Until the passage of California’s Assembly Bill 2147, which went into effect January 1, the same incarcerated people who help defend our communities against wildfires were often barred from becoming fully licensed fire fighters due to having criminal records. Local attorney Robert Boyd helped his client become the first Mendocino resident to clear their record under the new legislation. Boyd’s client, who had been imprisoned due to controlled substances charges, fought over 100 wildfires in 2019 as an inmate in Modoc County, was granted the expungement in late April and plans to become an emergency medical technician.

Mendocino County, CA – Bob Boyd, attorney at law, cleared the way for his client to become an emergency medical technician (EMT). Boyd successfully petitioned to expunge a felony from his client’s record; a legal remedy made possible through AB 2147, which was signed into law on January 1, 2021. The law enables formerly incarcerated people to clear their records after their completion of fire camp and exit from prison.

California has used inmate labor to fight fires since 1915; currently, inmates make up an estimated one-third of front line responders. The Fire Camp program is a partnership with Cal Fire available only to non-violent offenders. The program operates 44 camps throughout the state where thousands of inmates are trained and deployed to the front lines to battle California’s increasingly complex and destructive wildfires.

Boyd’s client participated in the Conservation Camp program at Devil’s Garden in Modoc County, where he worked fighting fires throughout 2019, battling over 100 fires. The client entered California’s prison system from Mendocino County where he was convicted on controlled substances charges. Prison was a wake-up call for the client, one that motivated him to change his life. He applied himself while in prison by passing the rigorous vetting and training process to work on the fire lines. Boyd said, “In California, the people who fight fires are heroes to us – they risk their lives on those fire lines. After all that, I think they deserve a chance to be gainfully employed as a fully licensed firefighter once they’re free.”

Prior to AB 2147, inmates who were trained and experienced in fire fighting could still be barred from employment as firefighters because of their criminal records. Studies show that without viable career paths, recidivism rates increase: inmates are more likely to reoffend without gainful employment and an opportunity to reintegrate into society.

“In my line of work, I try to minimize harm. This time, I got to do something good. Clients like this are the ideal –  they’re who this program was designed for,” Boyd explained. His client has been offered employment as an EMT in a fire department in his home State. Boyd believes that his client may be one of the first people in California, and certainly the first person in Mendocino County to successfully apply for this remedy and use it to start a career. On behalf of his client, Boyd petitioned a judge to expunge his client’s record on January 13, 2021. A judge granted the expungement on April 23, 2021.

Although the new law is intended to lower the barrier to entry for trained inmate firefighters to work as firefighters upon release, Boyd notes that the law has a much wider scope and impact. The triggering event to apply this remedy is the successful completion of fire camp. Once released, the formerly incarcerated person can petition for expungement citing that experience, no matter the field of work they hope to enter. Boyd is hopeful that his client’s story can inspire other inmates to volunteer for fire camp, successfully complete the program, and make positive changes to their own lives. Boyd shared, “There’s this saying that goes, ‘Felon once, felon for life.’ In this case, it’s not true. My client is proving that with hard work and dedication, people can turn their lives around.”