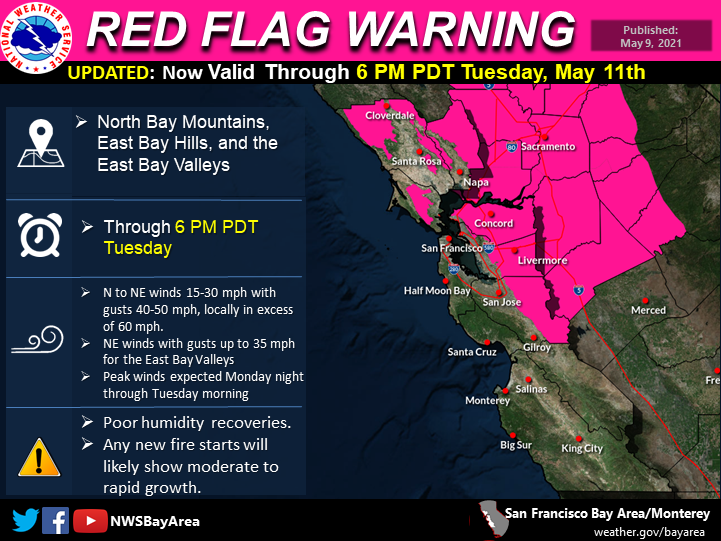 UPDATE 5/9/21, 11:30 a.m. — The National Weather Service office in the Bay Area has extended their red flag warning in Sonoma County and other parts of the North Bay into Tuesday. NWS Sacramento is also warning of critical weather into Tuesday. However, while some portions of Mendocino will experience gusty winds and high temperatures, NWS Eureka has determined that vegetation in our county is not yet dry enough to merit a red flag warning.

ORIGINAL
MENDOCINO Co., 5/8/21 — Fire weather conditions are present across Northern California, with high, dry winds, and hot temperatures, but meteorologists at the National Weather Services (NWS) office in Eureka say that most of Mendocino County remains green enough to not yet merit a formal declaration of a red flag warning. That said, things are drying out fast, with one of the worst droughts in recent history besetting the state, and a forecast of high temps in the low 90s for early next week in Ukiah and other inland valleys.

The NWS offices in the Bay Area and Sacramento have declared red flag warnings, meaning an extremely high risk of fires catching and spreading quickly, across much of their regions, including portions of Sonoma, Napa, Yolo, counties and most of the Sacramento Valley and foothills. In Yuba County a substantial fire is burning near Olivehurst, and other smaller fires have sprung up across the state; and in Butte Co. a fire north of the Chico Airport has topped 30 acres and is forcing evacuations.

However, according to meteorologist Ryan Aylward of the NWS Eureka office, the dead and live fuel (sticks and leaves, and living plants that could burn) moisture are still not quite low enough to present an extreme risk of fire in Mendocino, or Humboldt counties, and even in most of Lake.

“If this were August we would for sure have a red flag out, but since it’s so early in the season the fuels just aren’t receptive,” said Aylward. “For Mendocino County it’s pretty straight forward — the winds are a lot lighter, so even if we determined that the fuels were ready to go…[there isn’t] any site that’s reaching the red flag criteria.”

This doesn’t mean that fire weather risk isn’t somewhat elevated in Mendo, but it’s not quite at the critical level. Indeed in in most of the west of the county a moist sea breeze is keeping fire risk lower, while the eastern porition of the county, which is hotter and dryer is not seeing much wind.

But that could change very soon.

“Typically we’d still be really wet right now so that fact that the Bay Area has a red flag isn’t good for the summer…we’re on the cusp,” said Alyward.