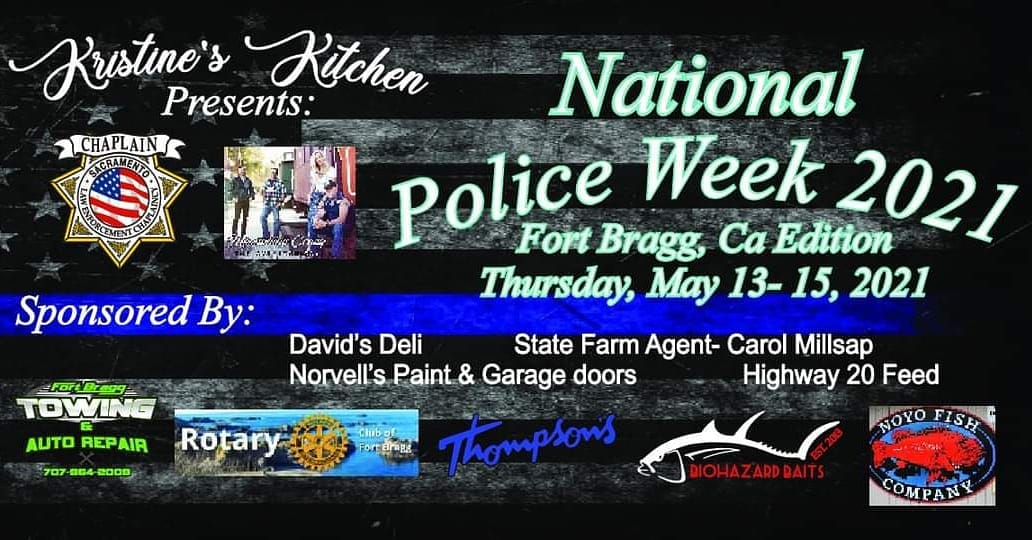 National Police Week will be celebrated in Fort Bragg May 13-15. Image/Kristine Gilmore

FORT BRAGG, 5/11/21 — A celebration of “National Police Week” is planned this week in Fort Bragg, with events happening Thursday, Friday and Saturday.

The activities kick-off Thursday at 5 p.m. in the parking lot of the Fort Bragg Police Department on South Franklin Street. Kristine Gilmore (who is the spouse of a highway patrolman) organized the event. There will be an opening prayer by Pastor Kris Strickland from Coast Christian Center, National Anthem by Krystal Strickland with accompanied acoustics by Frank Garcia, also from the CCC, an opening speech from Fort Bragg Mayor Bernie Norvell, a candle lighting presentation by Mendocino County Sheriff Matthew Kendall along with officers from local departments and a presentation by Mindi Russell, executive director of the Law Enforcement Chaplaincy- Sacramento program, Gilmore said in an email interview.

The event ends with a blessing of the badges ceremony and a closing remark from Gilmore followed by a moment of silence.

Friday is a private luncheon for law enforcement, their families and sponsors of the event only, with a mini-carnival for the kids in the group being held in the afternoon.

Saturday is the day for a public “End of the Watch Rally”, scheduled for 11 a.m. on Main Street, in front of Cowlicks Ice Cream in downtown Fort Bragg. End of the Watch refers to a ceremony honoring those who died while on duty.

Although police issues have been more in the headlines since the April 20 Derek Chauvin murder verdict in Minnesota, Gilmore, 33, said the event is not intended to be political.

“A few weeks ago a young lady had a negative assumption about the event, but I’ll tell you the same I told her. this event is not in response to the ‘blue lives matter’ movement but to recognize our fallen officers, to bring back the focus to the true meaning of community and to demonstrate there are still real people behind the uniform,” said Gilmore, in an email interview.

The local event came about due to a combination of Gilmore, and her high energy, and a town with people receptive to celebrating its  peace officers.

Gilmore and her husband came to Fort Bragg from the Sacramento area three years ago. She runs an online kitchen business.

“As for Police Week, I really just got bored doing nothing and seeing nothing planned for the future due to COVID. So, I ran the idea by a few officers and my husband and well it just kinda snowballed lol. You can ask anyone who’s ever worked with me, I don’t know how to do small things,’ she said.

“I did some research on the National Police Week in D.C. and tried to go along with their schedule- they, however, moved their dates to October. With our weather, we decided to keep it in May,” Gilmore said.There will be National Police Week events held this week, but all will be virtual. In person celebration nationally was moved to October 13-17.

Gilmore signed up local sponsors for the event. Thursday’s event will be a chance for locals to hear about the chaplaincy program that Russell heads up. The Fort Bragg Police Department has a new volunteer chaplain, Patrick Smith. Smith took police officer training, is a’ veteran and trains dogs, according to a recent city press release. “He is also very excited to work with his son, Fort Bragg Police Officer Tanner Smith, who pinned the badge on his father at the [recent] ceremony.” the press release stated.

Gilmore first met Russell 20 years ago when she was in school and the chaplain made a presentation.

“The one thing that has always stuck with me that she had said in her presentation at my school was ‘whenever you hear sirens stop and say a prayer for them because you have no idea what they’re going to.’ And I still do it today. Now being married to an officer. I pray even harder and which kind of led me to do this event,” Gilmore said in the email interview.

The local celebration of the police comes at a time when policing is changing and in which the public perception of policing has been impacted by the murder of George Floyd by Chauvin and other incidents.

“The negative things will always get more attention than the positive things. So, I would say, to help our officers…don’t assume,” Gilmore said.

After Sept. 11, 2001, police were widely viewed as heroes in popular media, although not quite to the extent as firefighters. Police and fire academy numbers surged. Studies showed juries became much more likely to convict defendants than previous to the terrorist attacks.

In recent years, videos of police killings, particularly of people of color, have changed the perception dynamic. Police work has also evolved toward greater recognition of the need for programs for the homeless and mentally ill to be dealt with by social workers, in what once was considered police-only domain.