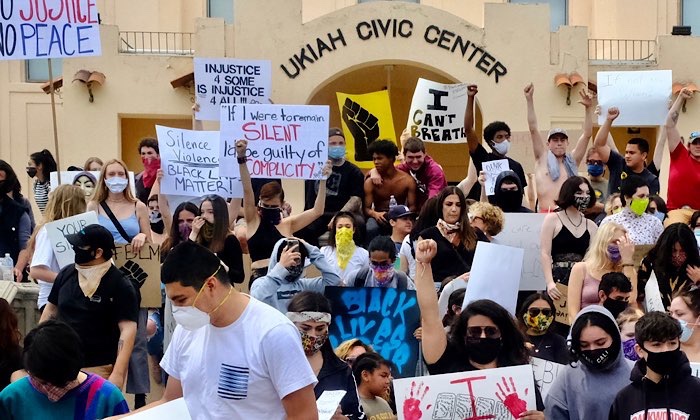 FORT BRAGG, 5/7/21 — Three Mendocino Coast social justice groups are asking the Mendocino County Board of Supervisors to hire a third-party to perform an audit on the past 10 years of spending by the Mendocino County’s Sheriff’s Office. Organizers said the audit request is an effort of SURJ (Showing up For Racial Justice), Mendo Coast BIPOC (Black, Indigenous and People of Color), and SCORE (South Coast Organizing for Radical Equity). BIPOC and SURJ are local chapters of national social justice groups.

But Sheriff Matt Kendall said any inquiry will find an understaffed department that is also short on financial resources.

He is proud of current efforts to get mental health professionals working alongside deputies. The first such trained worker started this week and she will be going on calls with deputies. The hope is that people can be steered away from arrest and into treatment. There are currently plans for two more mental health workers, one working with Ukiah police, one inland and one on the Coast, he said.

“We are working hard on a dual response model where we have a behavioral health worker who will be working directly with us on mental health situations,” Kendall said in an interview.

About 16 people gathered on Zoom for an informational meeting held by SURJ on May 4 about the proposed Sheriff’s Office and public protection audit. Another informational session on the proposed audit, also to be held by Zoom, is set for May 10. The audit idea originated with SCORE, a group founded almost a year ago, after the murder of George Floyd in Minnesota on May 25, 2020.

The audit will be discussed by the board of supervisors exactly one year later. Those pushing for the audit say they want to find out exactly what the Sheriff’s Office is spending money on, why the budget has increased every year and if that money could be refocused into more modern types of policing.

“Overall, it is clear that there is a need for more transparency from the Sheriff’s Office on spending, policies and practices, and on the management and demographics of the county jail. An independent third party audit can provide us with an accurate and comprehensive understanding of the department and their activities so that we can make well-informed fiscal and social decisions moving forward. If you are in support of a third party audit of the Mendocino County Sheriff’s Office (MCSO) budget and related public protection budget areas. Please support our call to action and contact your Board of Supervisors member before May 25th,” a summary published by SCORE says. (SCORE has a document about the audit here)

Reached May 5 about the proposed audit, Kendall wasn’t sure exactly what the audit sought. He had seen it was in the news but had been too busy to read about it so far. He said Mendocino County currently has far fewer deputies per capita than most other counties.

“Currently we are historically underfunded. By the end of the year, we normally run at $1.6 million to $1.8 million in the red,” Kendall said.

He is more concerned with that dynamic of a short-staffed department dealing with the coming summer growing and fire season. This year Kendall is concerned about violence that may arise from the drought as well.

The proposal for an audit seeks to scrutinize the management of county law enforcement to allow supervisors to identify priorities and refocus onto efforts such as using social workers to respond to crime or home detention for people unable to make bail at the jail, the informational session showed. Kendall said the department does a lot of home detentions at the present. He said public safety must be considered for any home release program and not all inmates awaiting trial are safe to do home monitoring with.

“There are some people who just don’t play by the rules,” Kendall said. He supports having workers such as the current mental health staffers responding to calls and they will eventually be provided their own cars but they would not be dispatched to calls by themselves, in case the situation escalates or is not what the call seemed to be initially. He has seen a similar program work in Butte County to actually keep people out of the system.

As to rising costs, Kendall mentioned the costs associated with the shift of state prison inmates to the county jail over the past decade. The county is paid to house state inmates but many costs are not covered by the state. He mentioned the Employment Development Department fraud case, in which inmates were able to claim EDD unemployment benefits they were not eligible for.

“That problem was not created by me, but now I’m having to take a great big chunk of my staff and put them on an investigation. All of the oversight was completely taken out of it,” Kendall said.

SCORE hopes an audit could show the total costs of operating the jail and then be part of a process to insure community priorities are being met.

“SCORE has a mission to build greater equity, safety and well being in Mendocino County, through supporting and leading community driven projects.” said Sydney Grange, a member of SCORE at the informational session.

She mentioned the cost of legal settlements, referencing the 2017 tasering of a mentally ill inmate (which resulted in a $180,000 settlement and the demotion of the correctional sergeant involved though no charges were filed against him) and also the death of an inmate at the jail in 2014, (which resulted in a $5 million settlement of a wrongful death suit.) Those cases resulted in public discussion at the board of supervisors, changes to a jail vendor and changes to policies for dealing with the mentally ill. SCORE wants to look deeper into policies, spending and accountability with the audit.

“We struggled to find many of the details of that spending. A lot of it just wasn’t available on the county site. This was parallel with continued requests from the Mendocino County Sheriff’s Office for more funds, and a lot of those requests have been made without providing substantial data and evidence to back up that stated need for increased funds,” Grange said.

“We also found a lack of publicly available information on the jail and jail demographics, and we did make extensive efforts to try to acquire more information on that, and also to communicate our concerns for the health and safety of people in the county jail, particularly because of COVID. And yet we were met with a lack of communication and clarity regarding that,” said Grange.

Unlike in other areas, there is no current controversial complaint or case driving the discussion. There have been claims the COVID-19 outbreak at the jail was mishandled and that information about that was not forthcoming.

“So why an audit?” said Dale Perkins at the informational session.

“What we’re asking is the Board of Supervisors to put together a committee to decide exactly what the content of this audit would be. And it could be very comprehensive or it could be less,” she said.

Perkins pointed to a sheriff’s department audit in Santa Clara County, which was the only California county organizers knew about where supervisors voluntarily did an audit recently. The state (not county supervisors) conducted audits in Alameda, Fresno and Los Angeles counties recently due to serious ongoing issues at those jails. Santa Clara County’s audit had positive results, she said.

“They [Santa Clara County] were able to figure out how to reallocate their manpower for faster response times and that was a part of their audit, they also were able to look at which positions they had really required somebody with a badge and a gun and what could be done by a civilian, just as well, “ Perkins said.

The Santa Clara County audit (read here) is a user-friendly look at all the statistics from the sheriff’s department, spending and data on everything from calls for service to response rates. Members of the public can easily find out how their county’s response rate or spending compares to other counties, which is currently not readily accessible information in Mendocino County.

Perkins pointed to the fact the sheriff’s department has unfilled positions.

“In a small community like this we all hear things and don’t quite know what they mean, and we need to have a better picture. For example, we know that the sheriff’s office has frequently asked for additional funding after the fact for overtime.

“Well it turns out they have a lot of positions that are not filled currently. And so what they’re having to do is have some of their officers work overtime to take care of that, those needs. In which case, that’s probably balancing out what’s happening financially.”

Kendall said the department is behind on staffing for a variety of reasons:

“A lot of it is that COVID shut down the police academies. We had a lot of retirements. And now, with legislation that’s out there, people don’t want to be deputy sheriffs and police officers anymore,” said Kendall.

SCORE and its allies have not asked the sheriff’s department directly to provide the information sought by the audit.

“The approach was working directly with the Board of Supervisors since they’re the owners of the budget. So there hasn’t been direct interaction between the folks who are calling for an audit and the sheriff’s department. Also, we’ve been very public and kind of transparent about all of this and there has been no response,” said Miquette Thompson of SCORE.

At the informational session, Claire Stedden said the audit is designed to help provide “more responsible financial stewardship and transparency, “

“It’s a good thing in general to just take a step back and also look at where the spending is going so we can reevaluate our practices and figure out what money could be used for that would support the community in other ways. The audit is not designed to be the end goal. It’s a starting point to figure out what we could do moving forward to have more accountability, transparency and also to use funding for other things besides the police department, and really support our community in, in better ways, to move forward to a better imagining of public safety,” said Stedden.

While Kendall is fully supportive of doing things differently with the mentally-ill to avoid escalation and keeping people from having to be arrested, he says the consequences can’t be taken out of crime.

“We have a very very loud minority in society that are against law and order. That’s just the way that things are right now,” Kendall said. “We are seeing legislation coming down the pike constantly that is removing, for lack of better term, personal responsibility. Assaulting anyone, including police officers, is not a risk free endeavor, resisting arrest is not a risk free endeavor. When the whole world wants to talk about police brutality, but nobody wants to talk about resisting arrest — I think there’s going to be a problem,” Kendall said, in the phone interview.

What the cost of such an audit would be is unknown at this point and would be something determined by an ad-Hoc committee of the board of supervisors that activists want the board to set up.

SCORE is asking supporters to send letters of support and call their supervisors.

Another informational meeting about the audit is scheduled for – Monday, May 10 at 7p.m. with SCORE: https://bit.ly/3nJg6Pf

Guiding questions for the audit- from SCORE