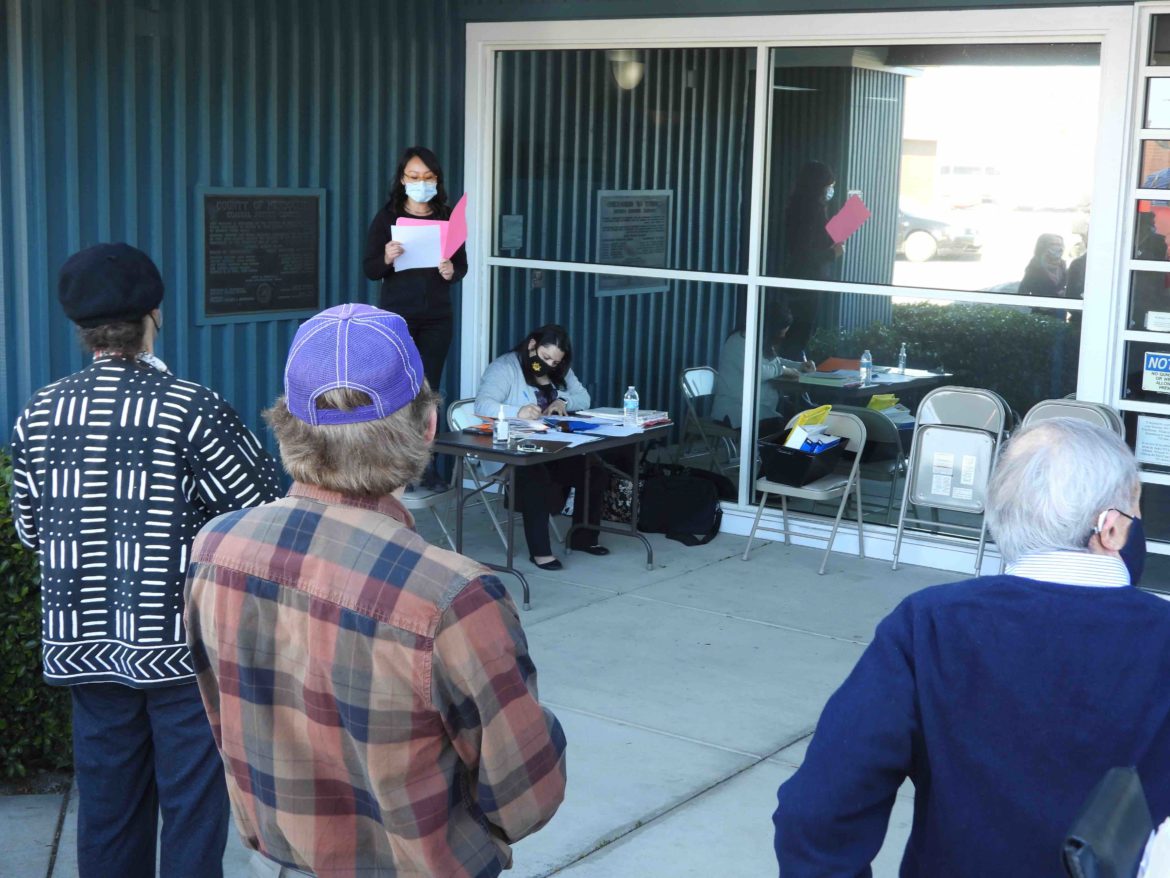 My Lan Do Nguyen, shown standing in rear, conducts the live auction of the Footlighters building on Wednesday in front of the Fort Bragg Courthouse

FORT BRAGG, 3/31/21 — Retired electrician Glenn Neutren purchased the old Fort Bragg Footlighters theater building at an auction in front of the courthouse in Fort Bragg, with a winning bid of $210,000, beating out a $205,000 bid from Noah Sheppard, an owner of several Fort Bragg buildings.

The sale of one of the town’s iconic downtown buildings, at 248 E. Laurel Street, drew a crowd of about 20 people as it was auctioned off to pay debts owed by the theater company to its former attorney, John Ruprecht, over a successful lawsuit that returned the building to the Footlighters from Mendocino Coast Television (MCTV)

Neutren, 70, has no specific plans right now beyond repainting the roof. He said he was open to community proposals for the building and was happy to hear from people about its future. He was working on cleaning out the building on Wednesday afternoon following the sale.

Neutren, who once bought a building while on vacation in Spain, worked as an electrician in San Francisco and the Bay Area but retired to Fort Bragg, which he says is his favorite hometown ever. “This is close and it gives me something to do,” the amicable Neutren said.

“I have learned my lesson about buying buildings that are far away,” Neutren added. He also bought buildings in Hawaii and Washington state at different times, in the end realizing distance made them impractical as investments. He originally hails from Petaluma, where his family once owned a store. He also owns a commercial building in downtown Willits at 215 S. Main Street and is a flying enthusiast with his own small airplane.

He was happy with the price he paid. “I think this was a really good deal. The building has really good bones. You can’t buy a fixer-upper for a price like that.”

He hasn’t decided what to use the building for. His first plan for now is to learn more about the building’s history and community interest in it.

Several community members have ideas for the theater’s future. Nathan Maxwell Cann has a written proposal he plans to discuss with the new owner. Cann hopes it can be used to create a badly needed creative space for Fort Bragg, for performing arts and artistic workshops.  Cann’s proposal can be viewed here:

The auction drew five bidders and a crowd of 15 spectators. The auction was conducted by two representatives of the Mendocino County Sheriff’s office, My Lan Do Nguyen and Maria Escamilla.

Promptly at 10 a.m, Nguyen stood on a chair and announced the sale, reading the entire sales notice as required by law. She took a first bid for $20,000 from an unknown bidder, followed by a security bid by attorney Suzanne Babb, meaning the creditor’s debt was at least covered by that bid. Spectators included Fort Bragg Mayor Bernie Norvell and former MCTV head Elizabeth Swenson

The bidding then went up in increments of $10,000 from $150,000  before Neutren’s winning bid, with small applause at the end. Nguyen later announced the winning bid had been verified.

Sheppard was hoping to create something like a community arts center or gymnastics studio if he could have gotten it for a price where he didn’t have to worry about the rents for such community space.

If you wish to contact Neutren, write to [email protected]