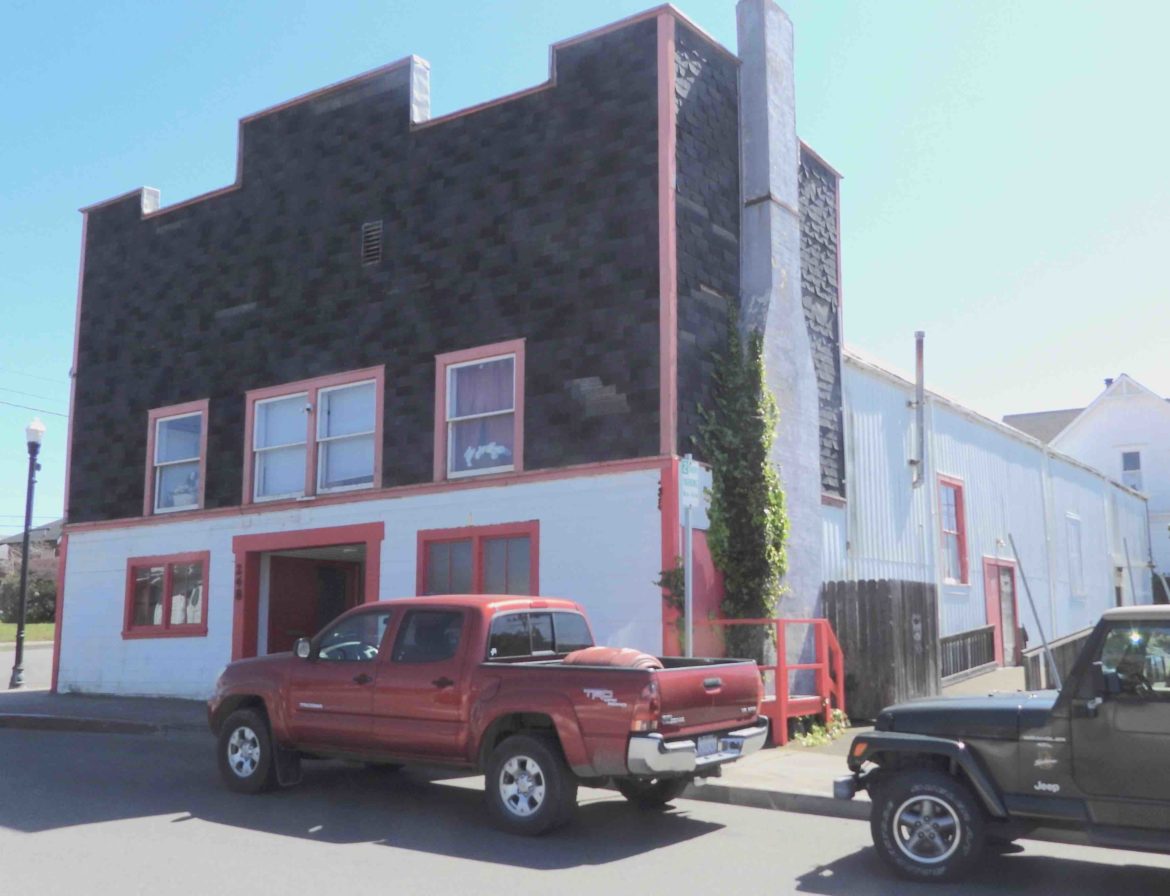 FORT BRAGG, 3/30/21 — Fort Bragg’s Footlighters theater building, which was the stage for 19th Century-themed plays for a half century, faces a real life drama on Wednesday and an uncertain future — when the property goes to auction.

The little red, white and chocolate colored two story playhouse at 248 East Laurel Street is set to be auctioned on the steps of Fort Bragg’s courthouse Wednesday morning at 10 a.m., March 31, 2021.

Tomorrow’s auction is a sheriff’s auction, called to satisfy a legal judgment in favor of Fort Bragg attorney John J. Ruprecht against his former clients, the Footlighters, a nonprofit actors troupe, Junice Gleason and Joseph Sverko. The duo were in charge of the Fort Bragg Footlighters play company back in 2013 when they won the building back from the community public access television station, MCTV.

The judgment amount in favor of Ruprecht and against the former Footlighters leadership is $148,711.32, the writ prepared for Wednesday’s auction states.

Sverko was long the star and director of Footlighters’ plays, sometimes appearing as a Wild West villain in a stovepipe hat. Gleason, who has not been part of Footlighters company of players in four years, has been trying to rally community groups to buy the building and turn it into a performing arts center.

Buying a building at auction requires research and preparation. This reporter had a look inside on Tuesday. The building appears dry and sound inside despite being unused during the pandemic. The stage stands ready to go. The balcony is loaded with racks of costumes once donned by the performers, along with sound equipment still left from its days as Mendocino Coast TV. The last performances by the Footlighters actors took place in the summer of 2019.

Back in 2013 Mendocino Superior Court Judge Jeanine Nadel ruled that MCTV had to give back the Fort Bragg Footlighters building and pay the theater company $36,315. The two non-profits had battled in court since 2009 over a decision made in 2006 to give the building to a fellow non-profit. The Footlighters company, which claims origins in 1948 as the Gaslight Gaieties, were officially formed in 1957. They had used that building for plays since 1966 until the early 2000s. Gleason said they put on a single play every season twice weekly from Memorial Day until Labor Day, when the Footlighters players ended with a last performance and a dress up flourish as part of Paul Bunyan Days. Most of the plays were bawdy comedies set in Fort Bragg’s early days as a wide open fishing, logging and drinking town.

Ruprecht won the case for the Footlighters, and then, in a tragi-comic twist, won the judgment against his former clients for non-payment of services. In 2016, Judge Clayton Brennan awarded $83,640.25 to Ruprecht and against the Footlighters, Gleason and Sverko. Because Gleason and Sverko had signed personal guarantees they were held liable for the bill by the court. Sverko had put up over $50,000 of his own money before the action was filed. Gleason had put in more than $10,000.

Nadel found that then-Footlighters board president Bud Farley acted illegally in transferring the building to the local public access TV station. Farley believed Footlighters was about to dissolve.

Instead it was MCTV that chose to end its own existence by dissolving after the lawsuit ended. The TV station had been a key documentor of community events and meetings on Coast. Some of that content is now done by the city of Fort Bragg. Nadel rejected the main defense that MCTV had acted in good faith and that nobody had objected in a timely fashion.

The Footlighters didn’t object when the building was given away back in 2006, though the move was well publicized. Objections came up only later, in 2007. A legal demand letter was written in August 2008 asking for the building back. Suit was filed in 2009. The Footlighters performed those seasons at other locations such as the Fort Bragg Masonic Lodge, while they were out of the building and involved in the suit.

Next, came the dispute over payment. Gleason said $64,000 was initially paid to Ruprecht for his services. She said she has had personal judgments filed against her bank accounts and property as the attorney seeks to recover the interest-compounded judgment he won.

The Mendocino Voice plans to follow up by visiting the auction and discussing the future of the building with Ruprecht and others.

One thought on “Fort Bragg’s Footlighters building and theater will be auctioned off Wed.”