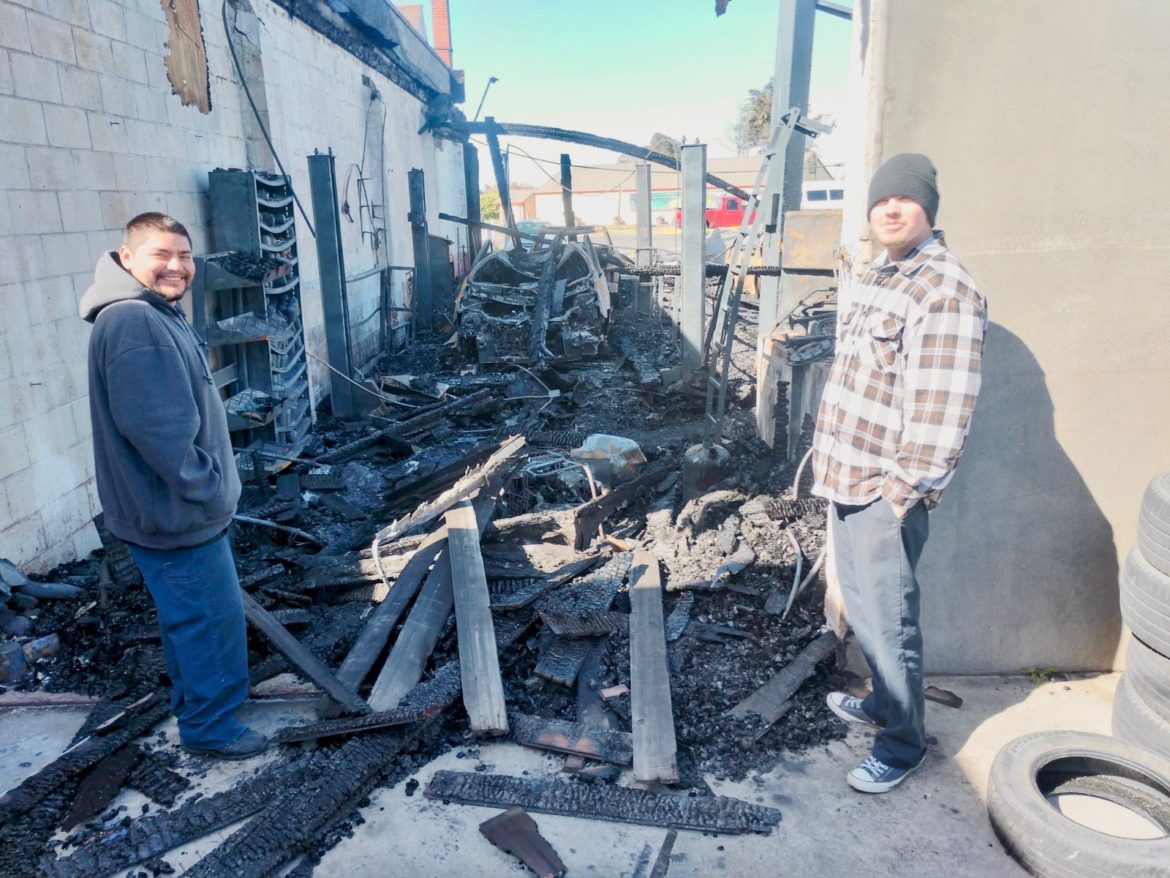 When Darius Brown left the housing projects of Atlanta for California, he never imagined a place like the Mendocino Coast.  He had separated from his wife, and she and their children had moved to Fort Bragg. He followed to be near the kids.

“When I heard California, I was thinking of Los Angeles, someplace always sunny and warm,” he said with a laugh. He arrived in Point Arena, where the demographics and chilly weather horrified him. “I said, this just isn’t going to work.”

That was until he met Fernando Gordon and went to work at Gordon’s Automotive. “I was staying at the Pine Beach Inn. I had only been working at the shop for not even a week, when he came and gave me enough money to move into a place and a car to drive. That is the kind of guy he is.” Brown said. “He didn’t know if I was going to even stick around.”

But stick around Brown did, for 13 years now. He and his fellow mechanics, Sergio Macias and Dylan Stipe, were at the business all day Tuesday with Gordon, although their collective workplace had just burned to the ground in the early morning hours of Sunday. A fourth employee had just started as an intern and wasn’t on hand Tuesday.

“This place is more than my workplace. It’s my life. Fernando gave me a chance to change my life and I changed my life here,” said Brown. They have fond memories of their children playing together at the end of the workday. Many personal items, personal tools and records were lost in the blaze. “Everything is gone in there. It is a total loss,” said Gordon.

The group gave friendly greetings to a steady stream of community members who arrived to check on them and give support — which has included, at the time of publication, nearly $11,000 raised by a GoFundMe campaign spearheaded by Fort Bragg High School Teacher Tara Larson. (Donate here). The fundraiser will benefit Gordon and the other shop employees, who all said the money was crucial at this time.  Gordon plans to rebuild the business.

The group greeted visitors with smiles and even some laughs as they waited together to support the boss during a meeting with insurance representatives and others coming to check on the wreckage. Some people brought good wishes. Others have brought food or gifts.

“If it wasn’t for the generosity of this community, we wouldn’t be doing any laughing at all right now, it would probably be all tears,” said, Brown, who has grown to love the community if not the chilly weather. “This love and the sharing from this community has been amazing, truly amazing,” said Gordon.

The Fort Bragg Fire Department has not yet determined what caused the fire. Fire Chief Steve Orsi said the intensity of the fire made reconstruction of the blaze difficult.  He said that the theory for now is there was an electrical issue high up in the rafters of the southeast corner of the building. A small fire likely turned into a destructive inferno after it burned through the roof and got into tar paper and fiberglass up there. “It’s very difficult to pinpoint an exact cause,” Orsi said.

Because the fire occurred well after midnight, it probably burned for some time before anybody noticed it and called in. “When we got there the fire had already been to the roof and shooting up in the air. We were in defensive mode,” Orsi said. The fire department arrived about eight minutes after they were called.

They were also concerned about the pink Victorian house at 520 N. Main Street that shares a wall with Gordon’s. At first, the fire department didn’t know if anybody was home or not. A bystander, who happened upon the fire early on, apparently threw a rock through a window but fortunately nobody was at home to be rescued. The fire department managed to save that house, quickly putting out any sparks that spread to the roof. The only visible damage was a partly melted skylight and the broken window.

There were no injuries that night, but the blaze came with a near miss for the fire department.  Firefighters were working on spraying the front of the business. They decided they had better move back quickly. No sooner had they done so when the front wall came crashing to the ground right where they had been standing, Orsi said. The collapse crushed and melted some customer cars. “Good on them for being alert. The wall came down pretty fast,” Orsi said.

Gordon worked his way up from a mobile auto repair business run out of his truck, starting in 1996, expanding into two other shops before he created the distinctive baby blue shop on N. Main Street in the heart of downtown. As far as anyone can remember, the building was always home to one auto shop or another.  It was Hood Automotive when Gordon bought it 17 years ago. Before that, it had past lives as Stout’s Tire, OK Tire and even as a Studebaker Dealership. The building was constructed of cement blocks and mostly metal siding, so it didn’t seem vulnerable to fire before it was. The fire burned so hot that the metal tanks became fatigued and appear to have melted into the floors in the front part of the shop. The shop was always full of cars, both inside and waiting out front. About ten customer cars were lost in the fire.

Brown, who is also a musician, recorded a song called Working Man with a line about Fernando Gordon. “I am a working man and always will be. That’s me now. Fernando has been a mentor to me, and a teacher. I never met my dad, but he’s the closest thing I have had, and he helps a lot of people,” said Brown.

“He is a good boss and a teacher. All these guys are my teachers,” said Stipe, another shop mechanic. He also didn’t have a car when he first started, and had planned to walk to work, but most days, Brown, Macias, or Gordon would show up and give him a ride.“This has been a great place to work and great people,” said Stipe.

Customer Steve Schoolman, who stopped by the shop on Tuesday to give Gordon some encouragement, said that Gordon deserves all the support. “Twenty two years ago we bought a house here. We bought a van from a lady and she gave us a warranty — but only if we brought our car to Fernando. I only know him through the business, but he is a great guy. We share family stories and it’s amazing what he does with cars. It’s sad to see this,” said Schoolman.

Read our earlier coverage of the fire here.