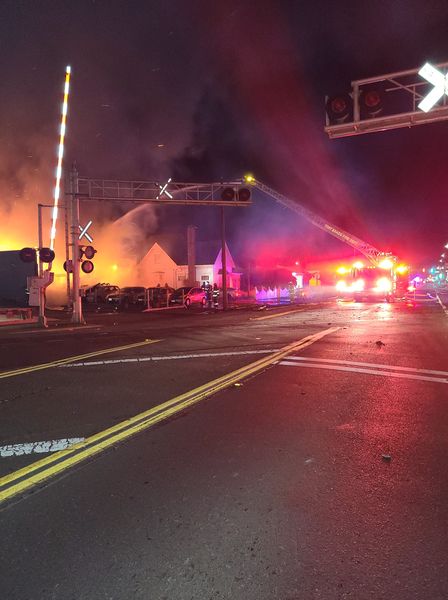 FORT BRAGG, 3/14/21 — Fernando Gordon started his auto repair business out of the back of his truck back in 1996 and isn’t about to let a destructive fire end what has been his lifelong passion. Gordon’s Auto Repair, located at 524 N. Main Street in Fort Bragg, burned to the ground in the early morning hours of Sunday morning.

Gordon is optimistic that he will be able to find a new temporary location and eventually return to the shop he has called home on North Main Street in Fort Bragg for more than 15 years. The parking lot of the distinctive baby blue building housing his lube and repair shop was virtually always packed with customer cars.

“I believe the insurance will pay for another place. I will talk to them tomorrow. I think we are going to be ok,” Gordon said.

For now, the shop is completely gone and his main source of income is too, as it is for the four employees of Gordon’s Automotive Services. Gordon, 55, lives in Fort Bragg with wife. They have five children including twin sons who are seniors at Fort Bragg High School. Fort Bragg High School teacher and track coach Tara Larson is friends with the Gordons and has set up a GoFundMe account for the Gordon family and shop employees (see here). She will also be seeking to have gift cards in local grocery stores and local restaurants for the family and employees.

“That’s the family’s only livelihood.  You know how insurance works and how much time it can take.  He works so hard and so many long hours and yet never misses a meet or soccer game for his kids. He is a pillar in the community and someone who is always willing to help others,” Larson said.

She said the Gordons are people who would rather be helping than ask for help.

“This is what our community does, to help others when they are in need when something like this happens,” Larson said.

The fire completely destroyed the building, along with 9 or 10 customer cars, Gordon said. There was some damage to the house next door to the shop also.

The cause of the fire is under investigation.

“The fire chief said it burned so hot that it was going to be hard to determine what happened,” said Gordon. He said the total loss may total $1 million dollars.Those who want to help can contact Tara Larson at  [email protected]

Donations can be given at the GoFund Me page:

This is a developing story.  More information will be added as it comes in. There were reportedly no injuries in the fire.

The following information is from The Fort Bragg Police Department’s Facebook page:

This morning 01:49 AM, Officers responded to the area of the 500 block of N Main Street, for the report of a structure fire. When Officers arrived on scene, the building was fully engulfed in fire, while threatening other structures. Officers quickly began to attempt to evacuate surrounding buildings. Officers then shut down N Main Street to allow Fort Bragg Fire to quickly and safely knock the fire down. Officers remained on scene until all fire operations were concluded. Officers were told by fire personnel that the cause is unknown at this time and nothing suspicious of note was located during fire operations.